Whisky treasure-hunt: Cryptogram which refers to a place in Scotland

UPDATE 4 - Inserted original list of questions (no more, no less)

Could someone help me solve this code? I've tried for 35 years.

It is a place name in Kirkcudbrightshire Scotland, perhaps something like a castle or a tower or bridge or monument. This is question 4, as shown on the following sheet. The answers that are shown include National Grid reference numbers for each location.

When I was so frustrated I requested another clue of the author. Here are the three additional ciphers that I received:

If it helps, here is a website that shows about 8000 named places in Kirkcudbrightshire. These named places are listed within each of the 28 parishes. 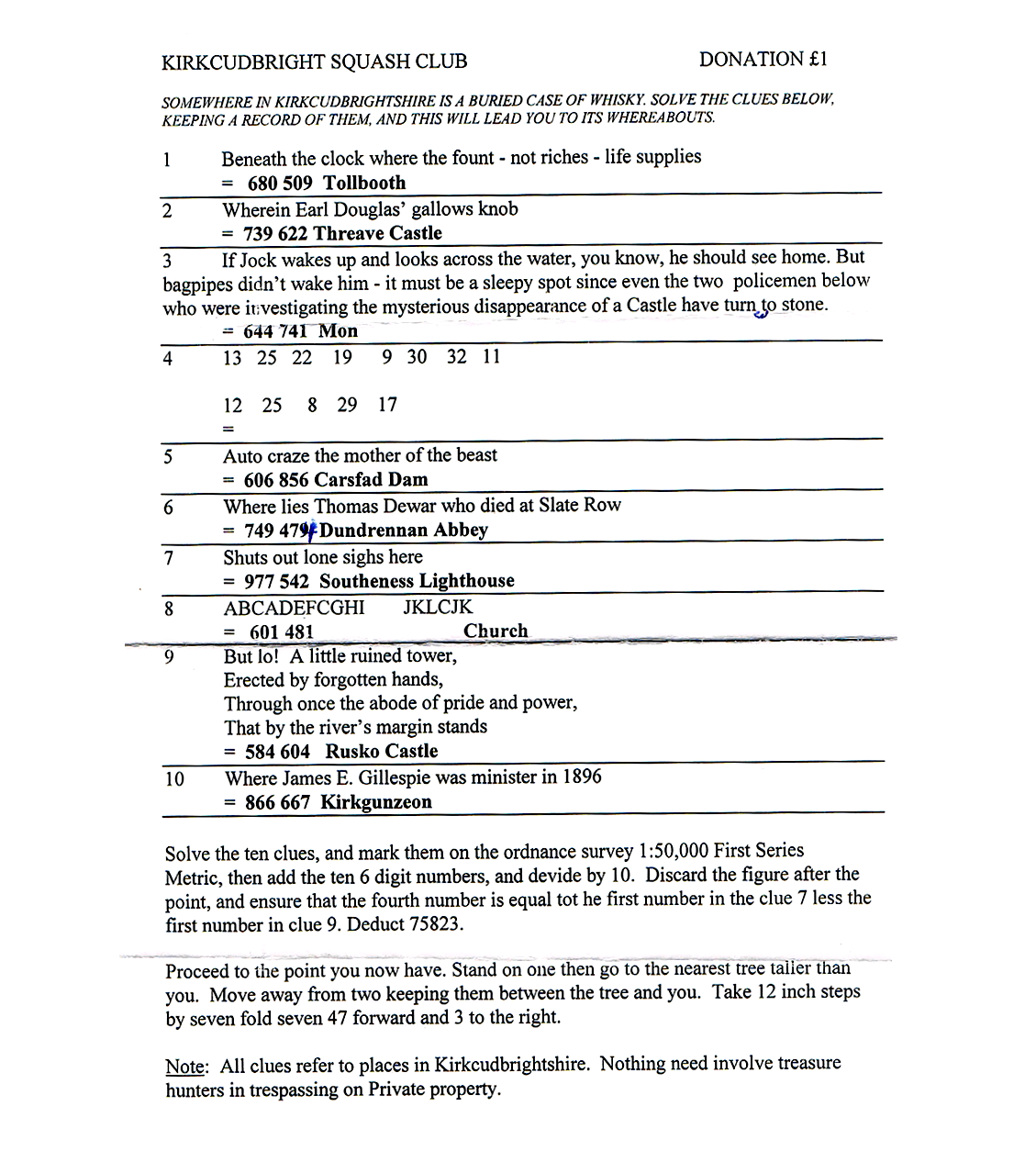 EDIT - Apparently the answer is "dead easy" which suggests that some local knowledge is required. So here are a few additional comments in italics and I give up.

The 6 digit coordinates are from the Ordnance Survey National Grid reference system. The first 3 digits are eastings and the last 3 digits are northings. In about 1980 when this treasure hunt was created, coordinates would have been read from a paper map with some uncertainty in the 3rd digits. For most of Kirkcudbrightshire, coordinates are entered into the "Grid Reference" box like this answer to Q1 - NX680509.

Here is some info about the other 9 questions. With a few minor exceptions noted below, all answers and coordinates appear to be correct:
Q1 - describes the inscription at the entry to Kirkcudbright Tolhouse (refer to "Rambles in Galloway")
Q2 - is explained in "Rambles in Galloway"
Q3 - describes a memorial with inscriptions near Lowran Burn - see photos on this page. The disappearing castle would be Lochivar which does not seem to be associated with the Q3 answer. Policeman could describe black and white markings similar to the band on hats worn by Scottish policemen.
Q5 - is word play with Carsfad
Q6 - describes the headstone inscription for Thomas Dewar. Coordinates are closer to 749 474
Q7 - is an anagram for the answer which is Southerness Lighthouse
Q8 - is a substitution cipher for Kirkandrews Church
Q9 - is a poem described in "Rambles in Galloway"
Q10 - is reference to minister at Kirkgunzeon - not clearly stated as 1896 but answer is most likely correct

Q4 does not seem to be a substitution cipher. There are no word pairs in the list of named places that match the pattern of any of the 4 cipher pairs. The pattern of "14 26 10 17 24 28 25 28 16 34 27 27" is distinctive but no word in English matches this pattern. Even progressively removing characters from the cipher words does not help to match the named places.

Q4 could be a book cipher but no answer was obtained from monument inscriptions, numerous poems, or the book "Rambles in Galloway".

Using the final calculation and a grid of points across the county, the location of the whisky has to be just east of Rusko Castle, within the 3 red blobs on the following map. (The two discontinuities are caused by the grid reference system.) Coordinates for a rectangle around the lower blobs are eastings from 604-665 and northings from 577-631. The upper blob is eastings from 629-654 and northings from 671-676.

It seems that there are only 2 place names of interest within these blobs. They are a) the Watch House in Twynholm and b) Cairntosh in Girthon. Using these coordinates to back-calculate the location of the Q4 answer provides a) no points of interest near Glenarm, Urr and b) a location which is near Cally Park, Cally House, and Cally Palace in Girthon.

Assuming everything is correct to this point, the answer to Q4 should be something around Cally Park (NX607553). I would be very happy if somebody figured out the Q4 cipher.

I assume this is a substition cipher. I know that some newspapers pose such problems. I checked to make sure it is not a rotation cipher, which it is not.

For this cipher we have the following conditions:

There are several possible obvious choices for the second word: Beach, Point, Sound and Tower; and numerous other more obscure possibilities: Cairn, Carse, Cauld, Clint, Corse, Court, Cowld, Craig, Firth, Grain, Haven, Hirst, Hurst, Lough and Slack. However, none of the well-known places having these words in Kirkcudbrightshire have a matching first word that I could find. There are several common places that could be the first word: Boreland, Dalgoner, Dumfries, Duncraig, Dunragit, Dunscore, Muncraig, and Twynholm, however I could find no second word to go with these.

Having gone through all the major cities and towns of the shire and found no matching places, I am inclined to believe there is a typo of some kind in the original puzzle, a common problem with old newspaper typesetting.

Credits to A E for figuring out that they were National Grid references. I tried MGRS and UTM readings, but they all went into the sea instead.

There doesn't appear to be any obvious "cross" on the map, but someone with better understanding may be able to figure out something from this.

The image was generated using the following Mathematica code, where nx was the image. 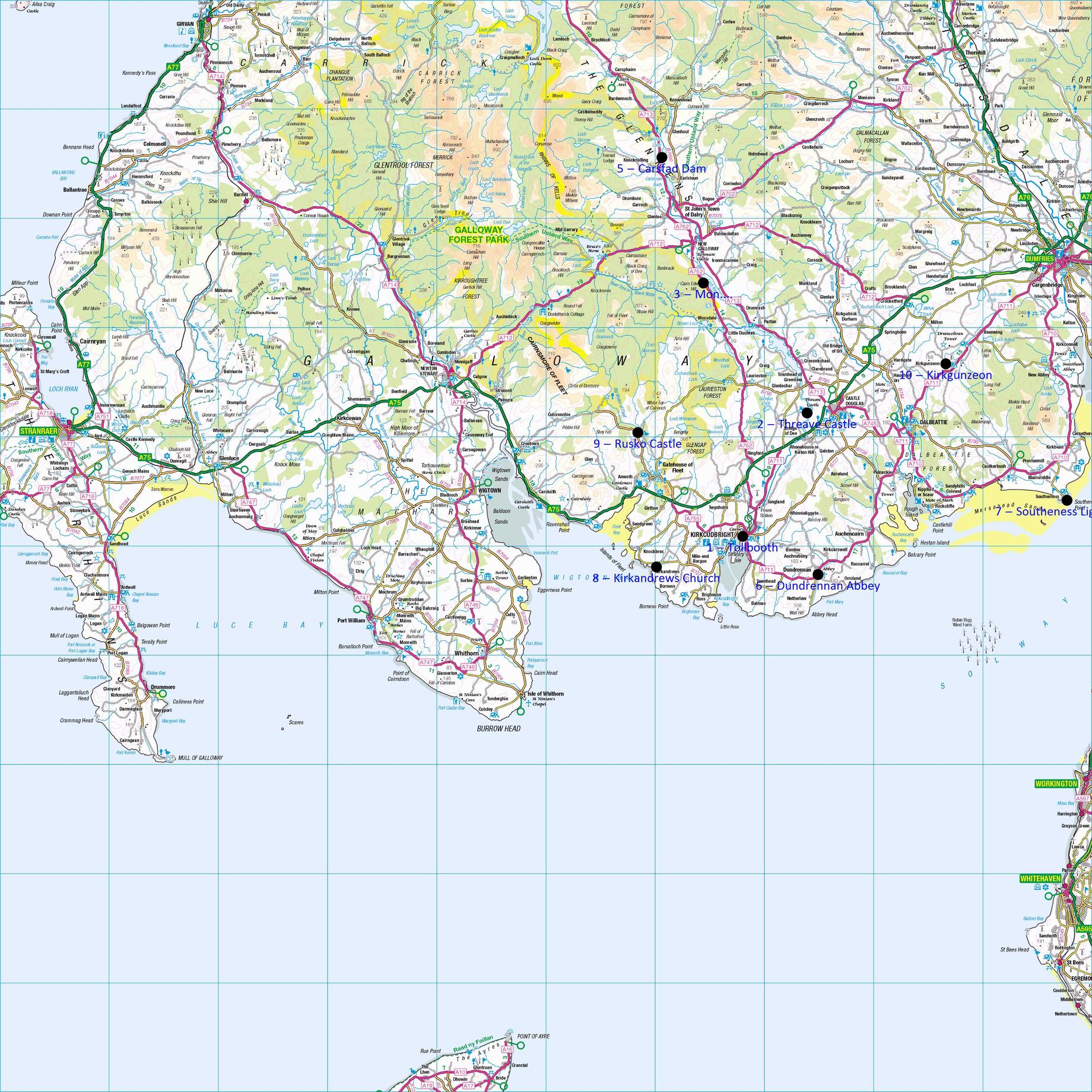 Due to stupid image size restrictions in the SE uploader, the image was heavily compressed to JPG, and was also shrunk by SE's default image host.

Rewrite on parity solution (Credit to Len for the inspiration that the boundaries can also be used to reduce the size of the solution) This rewrite aims to include additional information on Kirkcudbrightshire's boundaries, since both Clue 4 and the final whisky location are in Kirkcudbrightshire:

The 4 least significant digits of the coordinates of 4 must range from 2503 to 3502 in order for the 4th digit in the floor of the mean to be 4.

Therefore, the loci of possible positions of clue 4 have been reduced by parity to 10% of the original solution space, assuming all other positions are correct. 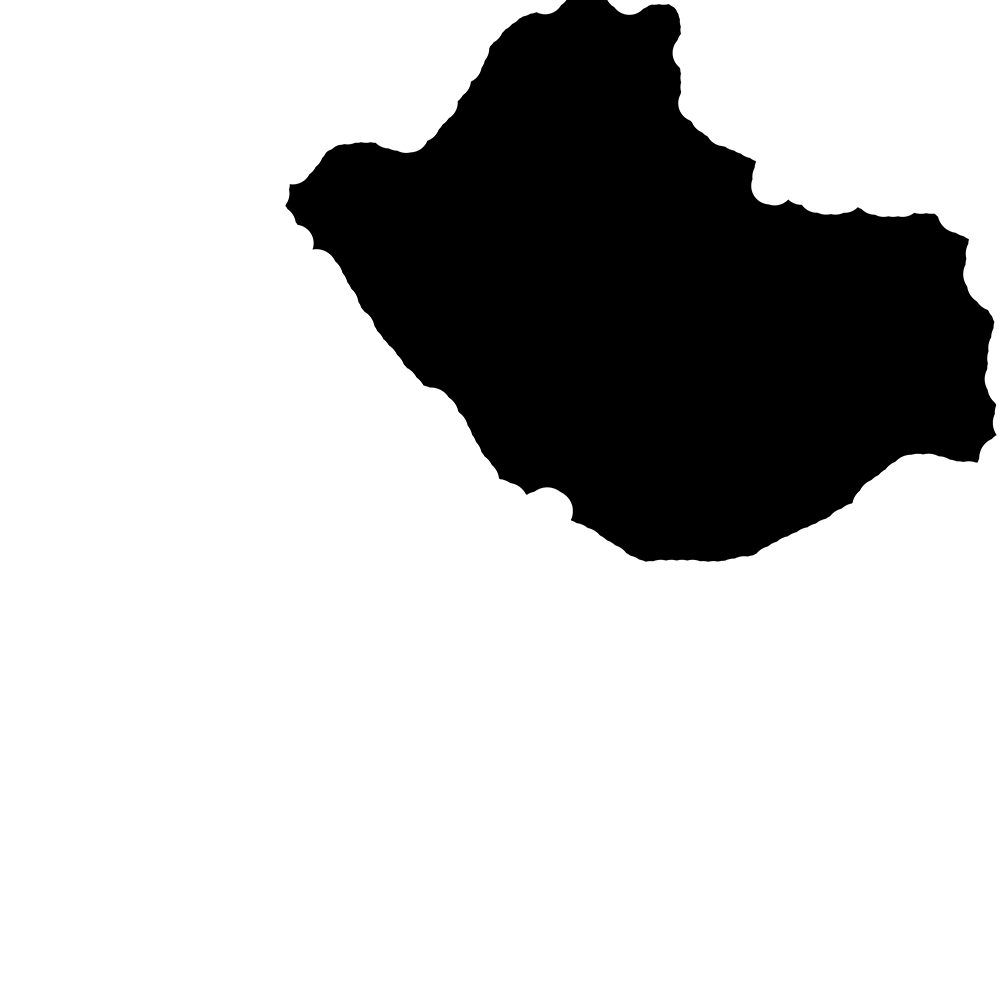 Performing the transform on the mask with this code

results in the following images for the loci of A4 and Whiskey Point (white: valid NX, black: invalid NX). Their overlays onto the map are shown: 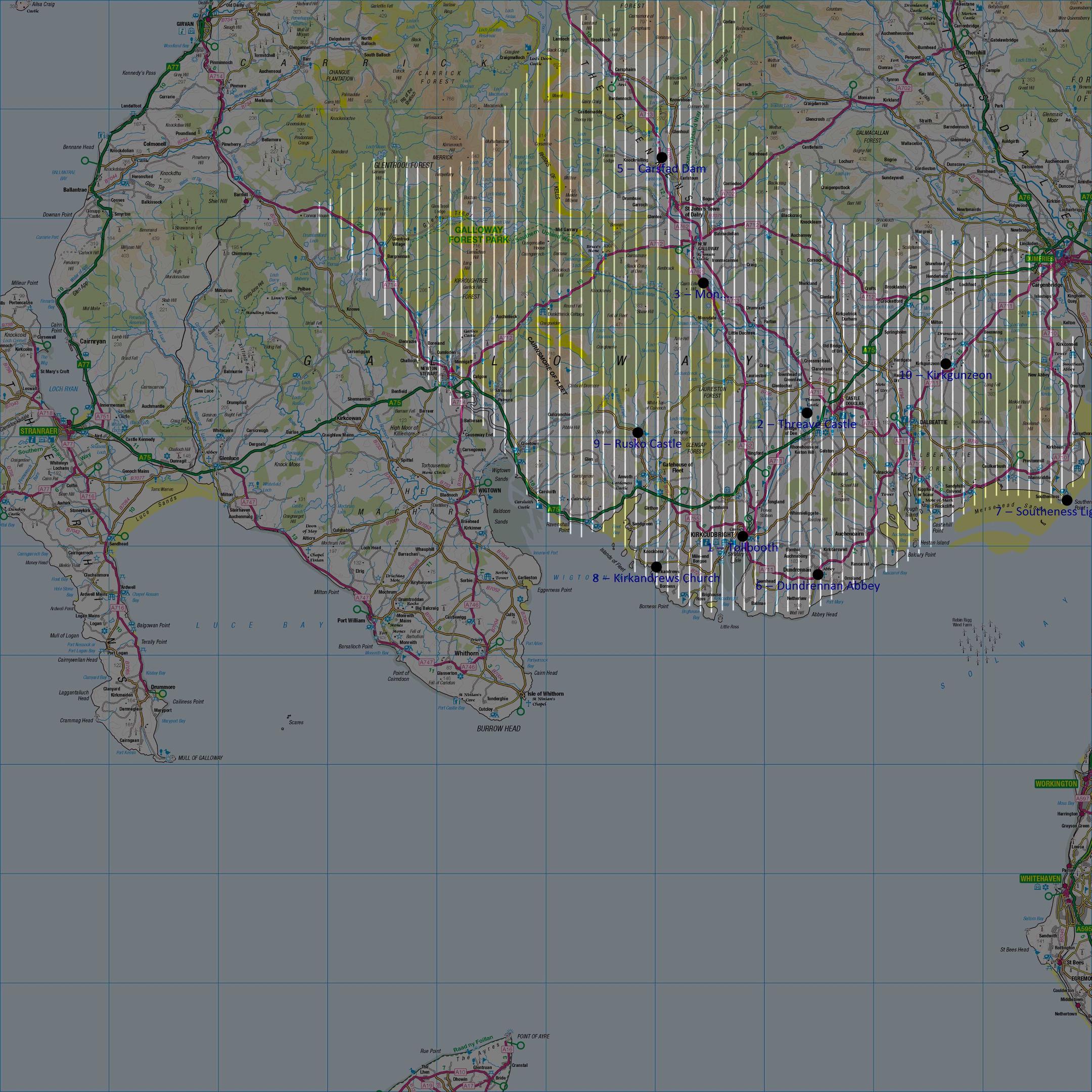 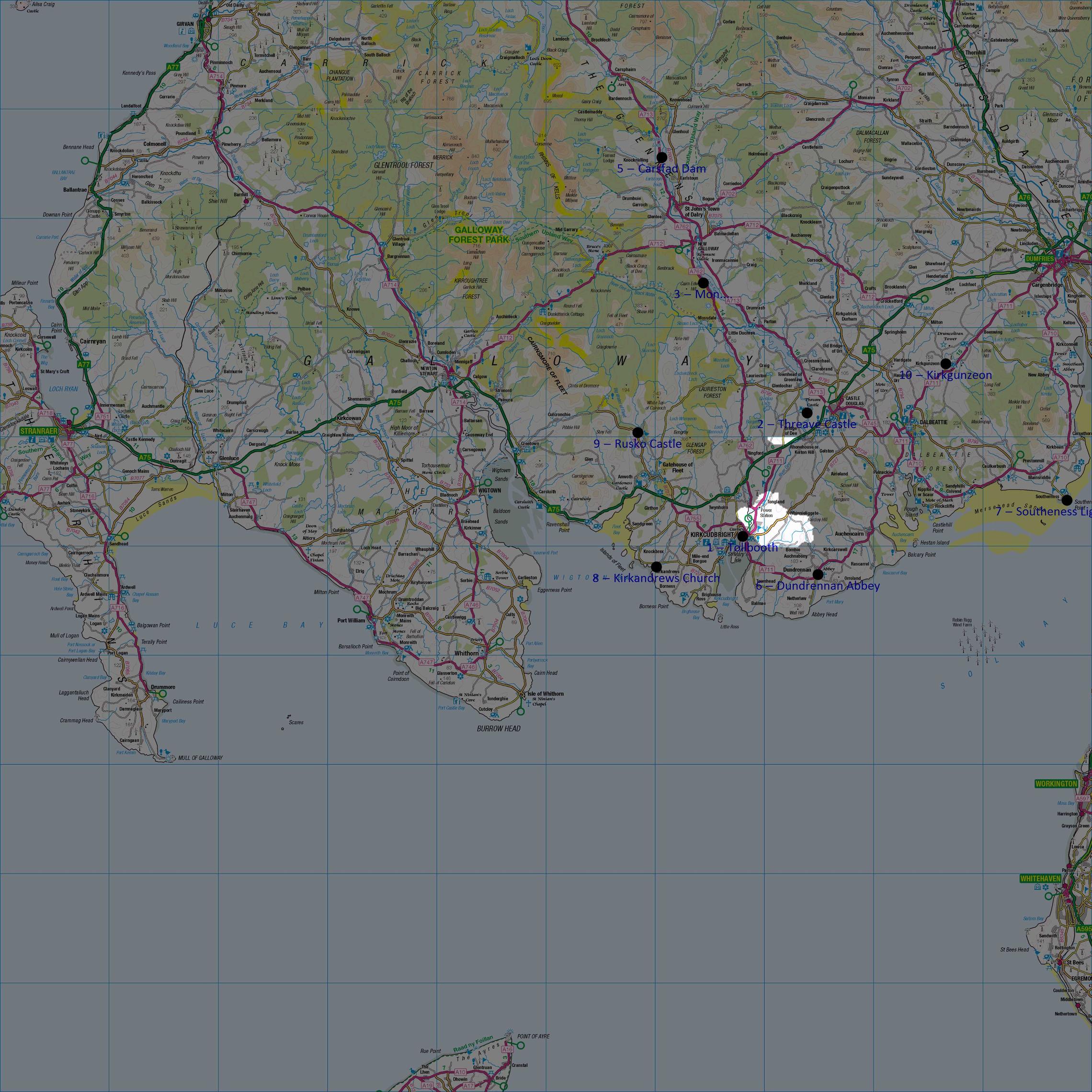 Some small progress, I think: the second of the three additional ciphers, namely

may well encrypt the words

Douglas McDavid, one of the owners of the Selkirk Arms in Kirkcudbright, is known for his prizewinning puzzles and has been since he was manager of the Cally Palace Hotel in Gatehouse of Fleet, another town in Kirkcudbrightshire. (He is referred to once in the article at that link as "Duncan", presumably a typo.) The Selkirk Arms also hosts an annual "brain game", the winner of which is awarded the "egg head" prize. The said establishments, it would be safe to say, also sell whisky. I'm hazarding the guess that he is the author of the puzzle and that the second cipher encrypts the name of the establishment he currently part-owns.

cryptanalysis is nothing without humint :-)

Some bits on reverse engineering the answer:

If we can assume the 9 other clues to be solved correctly, then we can use the "sum all divide by ten" and the "check first number..." clue ( 9-5=4 ) to get at the first digit of our hint 4 solution. We should also be able to determine what the last digit of it is not if we assume that "ignore the after comma digit" hints that it is likely not zero! Ok, that's only 2 out of 6 coordinate grid digits, but it limits further searches. (That's why I would like to have the 9 found numbers be fully confirmed. The image is a bit dubious about 749 479 vs 749 472, and Elisabeth also brought in some doubt on the last "rounded" digit of Q3.)

There are 2 more points in the general instructions which make me wonder:

Finally, "look for a tree taller than you". This might be really bad news for a 35year old puzzle! I am just glad that we all are only interested in the solution to the puzzle, and not in the whiskey :-). It might be hard to impossible to find it even with the right solution!

I have some serious doubts about this answer, but it's too long for a comment so here goes:

Reason why it could be the answer after all:

Reason why I've posted it even though it's probably wrong:

Yet another (so far failed) attempt.

We are therefore looking for cipher which maps numbers onto letters but in a non-unique way. (Or it would be a substitution cipher.) This could be a code-table where different numbers map onto identical letters, but it is hard to envision one which would be 'obvious and dead-simple' without any additional clue.

As a result, I continue working on the assumption Q4 is some sort of book-cipher, with the numbers representing a 'picking pattern' from some sort of source. Typically, such ciphers (if meant to represent letters) either specify Paragraph / Word / Letter in a numeric way. However, we only have double-digit numbers up to 34 which seems to indicate a more direct cipher. It could be

The second option seems more straight forward to me, but it would also suggest that the 'source' would be something the puzzle-solver would rather easily guess as there are no other hints to a source.

I've therefore written a little script which takes the code-indices and a source string and outputs the according 'pick n-th letter' solution. It does this in 2 variants: with and without counting spaces as letters.

The task now is to try out as many 'potential' source-strings as possible. I've so far only used

Both did not yield something useful. It would be great, if we could together compile a list of "source strings" we might want to investigate. In particular Elisabeth, as she might think of "obvious" source-strings due to local or historical or personal knowledge. Are their some mottos or inscriptions etc, which would be useful? They can't be too short, tough.

Not the answer you're looking for? Browse other questions tagged cipher treasure-hunt or ask your own question.