Pucks in the arena

Two identical pucks of radius 10 cm are placed in a round arena of radius 1 m. They are positioned 50 cm away from the center of the arena on opposing sides. Assuming no energy losses during sliding and collisions, can you hit one of the pucks such that the two pucks touch exactly once and then never again? If so, how can you do it?

I presume that there is probably a simple geometrical conjecture involving rational angles that could confirm the above. Proof that irrational angles don't produce a solution is as follows:

If both the balls bounces off the wall at an irrational angle (as a fraction of $360°$ or $2\pi$ radians), then the balls must collide eventually. Just consider stretching their future collision times along a single time axis. A ball $a$ or $b$ that does not collide with any other will hit the wall at constant time interval $T_a$ or $T_b$ and each collision with the wall will precess some angle $\alpha_a$ or $\alpha_b$, where $–\pi \le \alpha_a \le \pi$, around arena. So at the $n$th collision the ball a will collide with the wall at position $n\alpha_a \, \text{mod} \, 2\pi$ at time $n T_a$. As angle $\alpha_a$ is an irrational fraction of $2\pi$, an $n$ can be chosen such that the ball is arbitrarily close to the zenith ($0°$) position of the arena, and similarly an $m$ can be chosen such that the ball will arbitrarily closely revisit that position after a further $p$ (or $2p$, or $3p…kp$) collisions – where $m$ and $k$ are functions of what you define as arbitrarily close. If both balls are bouncing irrationally then they each get arbitrarily close to the zenith after $p$ and $q$ collisions respectively at time intervals $p T_a$ and $q T_b$. Now identify a fraction $h/k$ which is arbitrarily close to $p T_a / q T_b$ , and after $kp$ and $hq$ collisions each, the two balls will both be arbitrarily close to the zenith within an arbitrarily short time period and will collide. The same argument still holds if one ball is cycling a rational angle.

So the only remaining possibility is that both balls bounce at rational angle increments after the collision and manage to miss each other, which I still think is unlikely, although it is obviously possible to set two balls bouncing so they never collide...

If such a rational solution exists after one initial collision then:

Both the balls bounce rational angles so each repeats its path exactly after some $p$ and $q$ collisions. In this case the repeat period for each ball will be $p T_a$, and $q T_b$ respectively. There is no guarantee that the repeat times are rational or rational ratios of each other, but regardless of that, you can choose some large number of repeat periods $u$ and $v$ for each ball such that $u p T_a$ is arbitrarily equal to $v q T_b$. At the next collision after that time, the two balls will strike the walls at positions and relative times arbitrarily close to those that occurred at the time of their first collision with the wall (after they initially struck each other). At that precise moment (when the pattern repeats), trace the ball's positions backwards and you will observe that their time-reversed paths are arbitrarily close to their initial paths after they struck each other. So tracing it backwards they would strike again (or to put it another way – they couldn't get to the arbitrarily identical positions without colliding with each other immediately beforehand).

I think that is sufficient to confirm the hypothesis in all possible cases other than zero initial velocity. I'm sure things could be formalized but I will stick with the hand-wavy "proof".

I'm on the same boat with @Penguino, but there's the edge case still to consider:

Can the pucks come to touching distance of each other without actually colliding?

If that were the case, then it could theoretically be possible for the pucks to complete arbitrarily many synchronised loops of some kind without actually colliding, and it would be possible to have a collision in the mix as well.

This corner case seems equivalent to this problem: 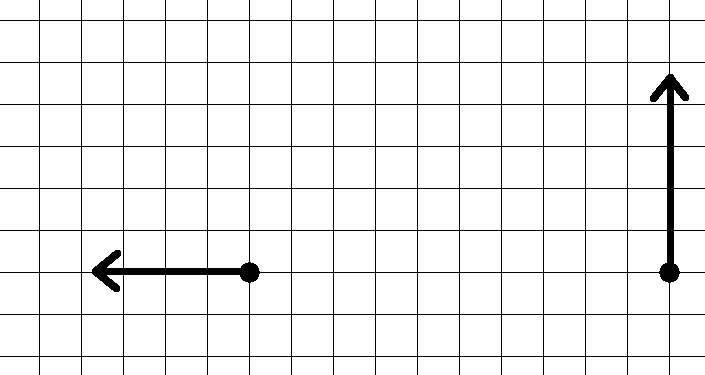 What are the constant non-zero speeds (directions given) of these two points, given that they never came closer than ten units of each other?

If there's a solution to this problem, then there could be a solution to the whole, even given @Penguino's excellent argument: after the first collision the pucks must be moving at right angles because of the conservation laws, and they must repeat the position later, (because infinity is quite big), but given an answer, this could be a way to get around @Penguino's argument.

I think the answer must be "nuh-uh, can't do that, $\text{cos}(\theta)\approx1$ for small $\theta$, and infinite speed ain't cool", but I'm not exactly sober, and I'm way past my bedtime even without that, so I'm afraid I'll have to leave it to you guys.

Not the answer you're looking for? Browse other questions tagged mathematics logical-deduction geometry physics or ask your own question.

4
Find the magnet among the two rods
14
Bars in the river
6
Color of the bear
4
Game of Billiards: Kill the Planets Too
5
The Random Rube Goldberg Messup
0
The driver and the chickens
3
Figure out the ? in the figure below
11
In which direction does the water flow?