You are back on Tatooine with R4-D2 (a descendant of R2-D2). During the journey to Herogga's pavilion, you encounter a fierce sandstorm. Unfortunately, some of the fine particles have infiltrated R4-D2's drive units. Serious damage will occur unless the droid is disassembled and cleaned. You know this will not be easy so you look for some guidance and find three equations, a small crossword puzzle, and some encoding.

As your mission is urgent, you proceed to understand the clues and successfully disassemble R4-D2.

The best solution to this puzzle will be the first to show a correct diagram of the droid's components. Partial answers are OK.

(The clue to all of the words in the crossword is four. The equations and crossword will tell you the number of components and their relative shapes. The encoding provides a little more description of the shapes but is not necessary to solve the disassembly.)

HINT - The encoding sequence was English letters to Base 4 numbers to CMYK colors. 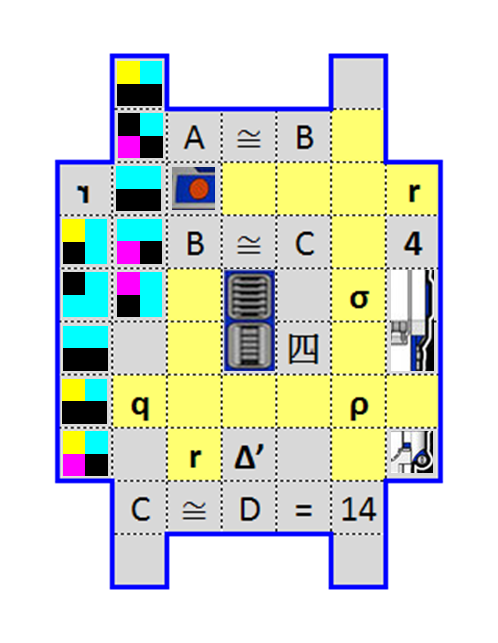 Finding the dissection was fiendishly difficult, but here it is: 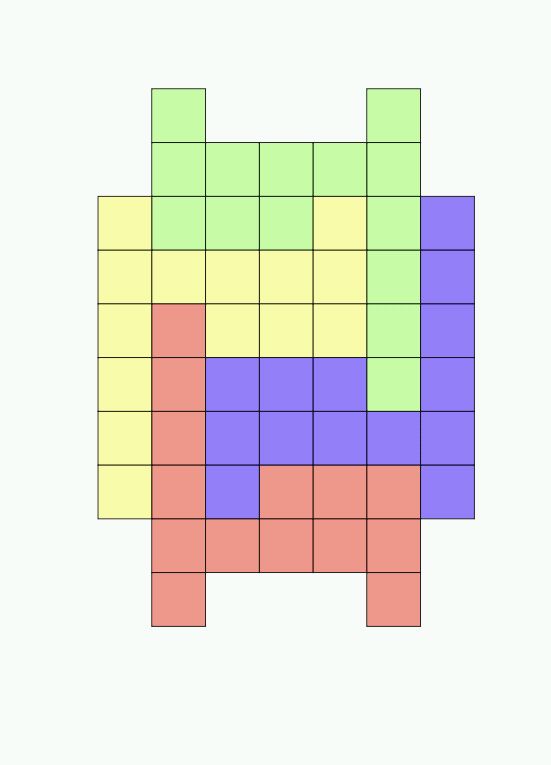 Now as for the other clues or puzzles:

The equations were rather straight forward:

One can easily see that they build a chain, in the end being written in one line as A≅B≅C≅D=14 which means that we seek 4 congruent tiles a 14 squares. This matches, as the whole puzzle has 4x4=56 squares. Also "4" is the solution of the crossword puzzle and also appears as single number. So now we know how we have to dissect.

The crossword was first solved by shoover:

The 4 words are all literally "4" being written in 4 different languages: vier, quatre, four and tessera. (German, French, English and Greek, respectively). The Greek tessera was written with Greek letters ( τέσσερα )
The purpose of the crossword puzzle is somewhat illusive, as 'four' was given as hint and is the only information gained by the puzzle. But it is a very nice sub-puzzle enforcing the fact that the dissection should happen into 4 parts.

The colour code was first solved by Volatility:

From here, it is trial-and error to find one has to go 'clockwise' for D,C,B,A and the colours are 0,1,2,3 for Black, Cyan, Magenta and Yellow respectively.
The fields then spell out CHAIR and STACK which nicely describes the graphical dissection.

This is a work-in-progress list of observations and possible leads in this puzzle.

I'm posting, because the OP invites to do so. I also think that if one purpose of the site is to teach puzzle-smiths how to improve, this is an important step, because it gives the puzzle-smith feedback on what reactions his puzzle creates, even if they are not the intended ones. (So they can be recognized as wanted red herrings, or may be removed by better specification.)

There are 56 tiles and 4 variables as well as the numbers 14 & 4. The equations indicated proportionality or equality and 14*4 is indeed 56, leading to the assumption we have to dissect in 4 equally sized but not equally shaped tiles.

**has already been solved (I think) by shoover above, with being vier, quatre, four and tessara all meaning 4. A nice twist is that Greek letters are used (sigma & rho) for the Greek tessara.

The puzzle as a whole:

1. There are indications of mirror operations like the mirrored "r" in the top left.

2. There are also some (6) tiles which are graphics which seem to be puzzle-tiles of an image representing a R2D2 (or R4D2 ?) They are not complete. These might be filler without meaning or they may come in later?

3. There are 7 empty tiles. Maybe they are needed to counterbalance the bitmap tiles of point 2. ?

4. Colours in the colour-tiles are the prime colours of subtractive colour mixing (printing colours). which at the same time make them result-colours of additional colour mixing (screen colours). It might therefore be, that they represent an overlay of colours.

Having spent a little more time on it, I

From the equation A=B=C=D=14 it seems that there should be 4 congruent shapes of 14 tiles which dissect the R4-D2.
If this is indeed the case, the other (colour) hints would not be needed, and one could simply attempt a regular 2D dissection puzzle into 4 congruent shapes.

I simply can not find it, and having tested similar shapes "growing" I'm getting more and more suspicious that there is no such solution...

Which makes me wonder:

Am I making the wrong assumption tempted by the regular square grid? Do the shapes have to by polyominos? I'm no longer sure about that at all...

Is this for sure only a 2D puzzle? Or are we dealing with a clever 2D projection of a 3D puzzle?

Each section would have 14 squares - which fits to the surface area of any 3-cube part. (3x6 minus 3x2 border walls ) This would also nicely fit to the colour-bitmaps if they depict in a certain way such 3-cube L arrangements. Not sure how though.
Would this work in 3D in principle? 3x4=12cubes would have a maximum surface area of 12x6 - 11x2 = 50 if they are touching one space each. Hmm...

Only a partial answer here, based on the crossword clue.

The crosswords are "four" in different languages: vier (German) and quatre (French) across, and four (English) and tessara (Greek) down.

The symbols 4, 四, and Δ' all have a relation to the number 4: the first symbol is obvious, 四 is the Chinese character for 4, and Δ' in quadratic equations is Δ/4 (where Δ is the discriminant). These symbols (I believe) serve as a clue to the crossword puzzle. The backwards 'r' does seem to suggest some sort of mirroring, as @BmyGuest has stated.

As the answers above say, the answers are 'vier', 'tessera', 'quatre', and 'four', the words for the number 4 in German, Greek, French and English respectively.

Put together, the equations say A≅B≅C≅D=14. The '≅' symbol is the standard symbol for congruency in geometry, hinting that A, B, C and D are congruent shapes. 14*4=56, which is the number of tiles, supporting the idea of congruency.

Since @Len was gracious enough to give us a hint, all I had to do was figure out which numbers the colours stood for, and what order they were in. Because the ordinal numbers for 'A' to 'Z' were 65 to 90, I figured that the first number would always be 1. The corner with the same colour in each symbol was the top right, with cyan. Using that, I guessed that C=1, M=2, Y=3, and K=0. Then it was a case of trial and error figuring out what order they were in. This worked out to be a clockwise "circle" starting from the top right, yielding the message "CHAIR STACK".

The graphics and empty tiles:

Haven't figured those out yet.

Not the answer you're looking for? Browse other questions tagged dissection or ask your own question.