You have 3 white queens, 3 black queens, 3 red queens, and 3 green queens. Place all these pieces onto a normal 8x8 chessboard in such a way that no queen threatens a queen of a different color.

Okay, that was easier than the previous variations, right? You can probably use the pattern you found to solve these problems as well:

Which leads to the real puzzle:

At what point does it become possible to place more than $N-5$ queens of each of four different colors peacefully onto an $N\times N$ checkerboard?

While I feel it could be, this may not be optimal. However it is, at least, an upper bound...

I first note that it must be possible with:

Like so (the green shading shows the locations under attack by army A):

...and the layout has $4$-fold rotational symmetry,
so rotating a quarter or half-turn, other armies are just like A. 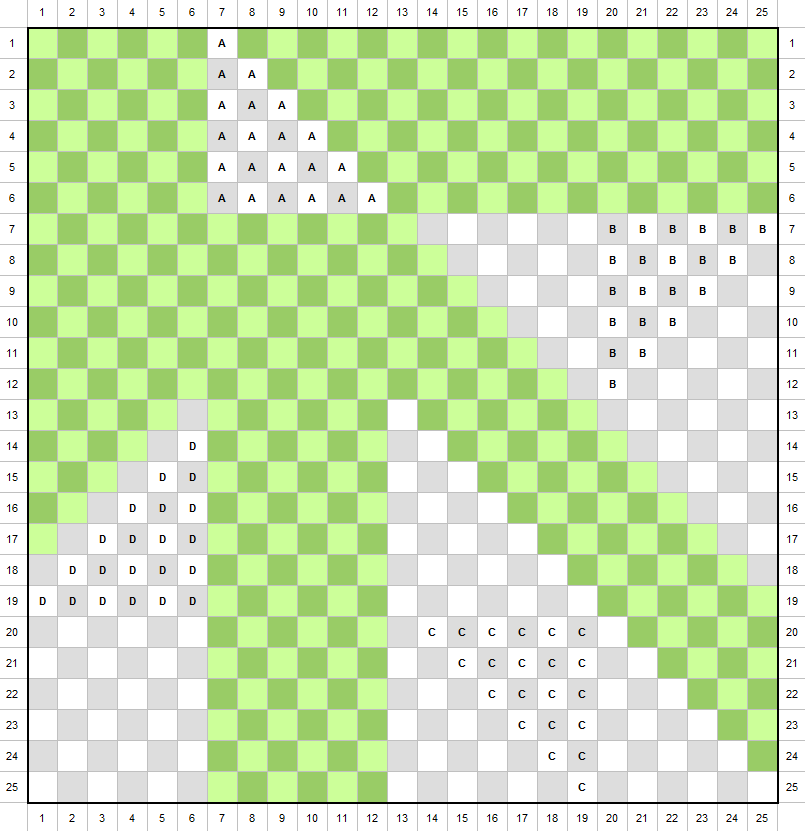 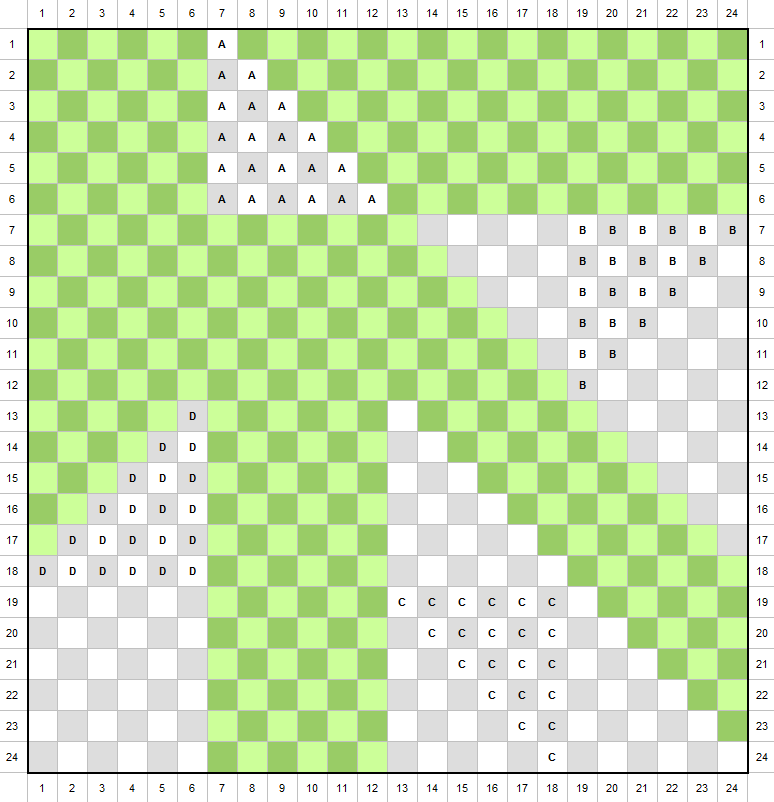 and that we can 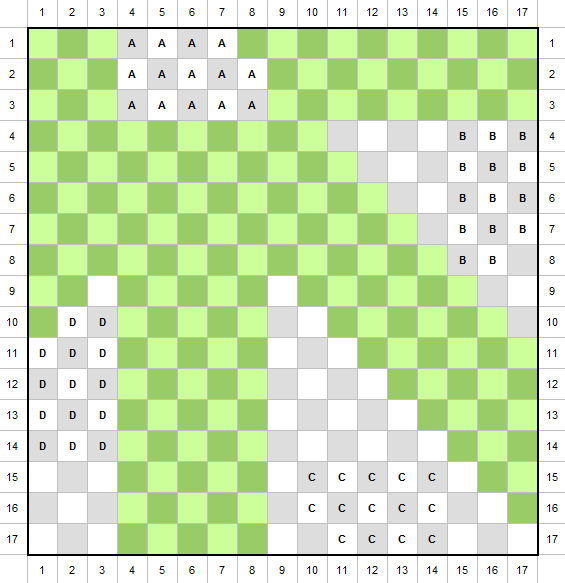 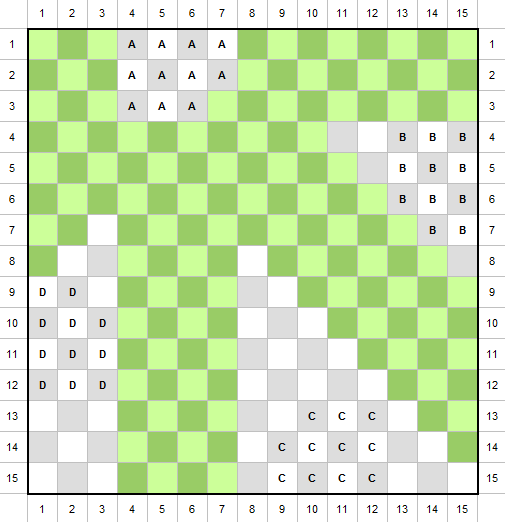 ...and (thanks to Daniel Mathias!) 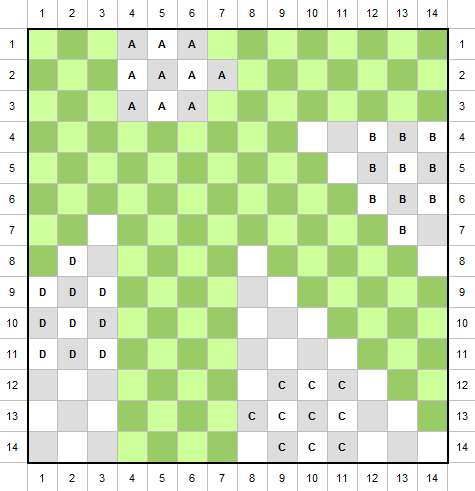 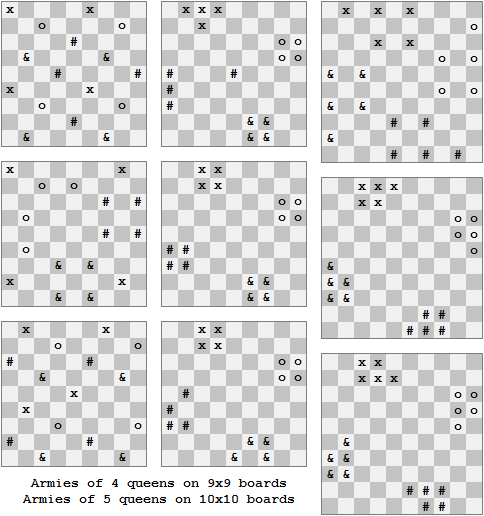 These are the only solutions for armies of $6$ queens on an $11\times11$ board. For the $12\times12$ and larger boards, the search was modified to find only rotationally symmetrical solutions. 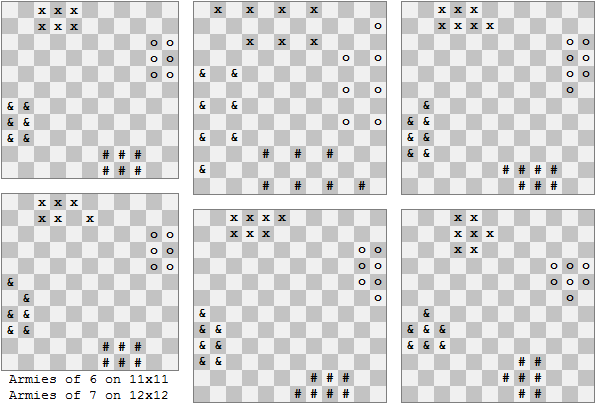 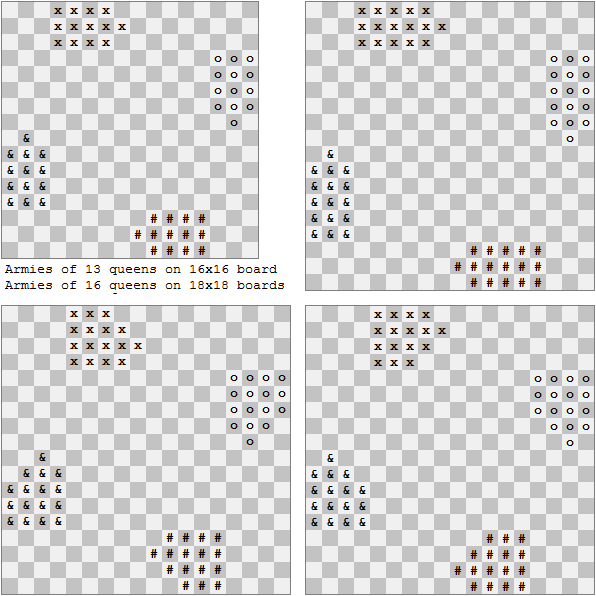 I haven’t completed my proof yet, but I believe from preliminary results:

Not the answer you're looking for? Browse other questions tagged mathematics geometry chess checkerboard or ask your own question.

5
Place 16 queens in a $16\times 16$ board peacefully, also in subboards!
7
8-queen puzzle on its head
17
Discrete Peaceful Encampments: 9 queens on a chessboard
7
Discrete Peaceful Encampments: Player 3 has entered the game!
4
Enumerate the ways of putting six armies of queens on a humongous chessboard
7
Peaceable Bishops on an 8x8 grid
3
Peaceable Bishops on a 10x10 grid version 2
7
Chess pieces attacking exactly N chess pieces
7
3 Colors of Chess Pieces Attacking Each Other Once Each
4
4-coloured queens attacking every opponent queen once