Creating a puzzle with rotating parts and logical approach

I am a game developer working on a project and I had an idea to create the following puzzle. 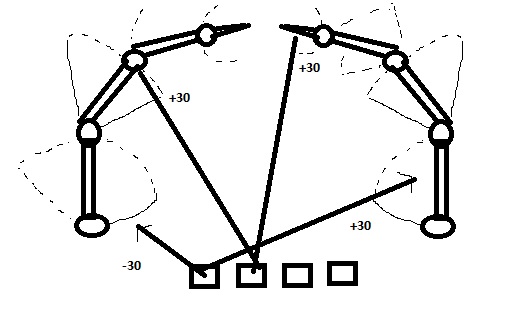 In the diagram, the actions are not precisely what I have implemented but it should give an idea. Basically, while each button limits the joint to be moved to 4 positions, it can be in more positions if another button also rotates that joint (by interconnection), or a lower one is used which then rotates all the elements above it.

For example, rotating the closest joint on the left arm will cause the whole left arm to turn (obviously), but in addition to this, the top joint of the right arm will rotate because the two joints are interconnected.

The goal would be for both tentacles to reach particular position.

The problem is that I cannot see how to make it solvable logically instead of randomly rotate individual parts. Is there something I could follow to make it like that?

I think in order to force the player to use logic, rather than random moves, you need to make using logic a more attractive route than random guessing. Therefore, I'd suggest you do three things:

Between complex interconnections and the shear number of valid positions, the difficulty will rapidly increase, making it hard to even know where to start with logic. I'd suggest giving each joint only 2 possible positions, which will still allow for interaction complexity, whilst allowing the player to actually hold the puzzle state in their mind and start calculating ahead.

Again, in order to use logic, you need to be able to visualise and calculate how the various interactions are going to play out. If the solution requires more than 4 or 5 steps to complete, then it's going to be unwieldy without just playing around and guessing.

The above points should make your puzzle solvable by logic, but it will also make it even easier to just randomly mash buttons and eventually arrive at the solution. To prevent this you could have some sort of "penalty" for guessing. This could be implemented many ways such as, limiting the number of moves (device resets after N button presses), having a "cost" per move (injuring the player, reducing the reward for solving, etc), having them "sent back" (thus suffering a time/delay penalty), or some mixture thereof.

Not the answer you're looking for? Browse other questions tagged puzzle-creation puzzle-theory or ask your own question.