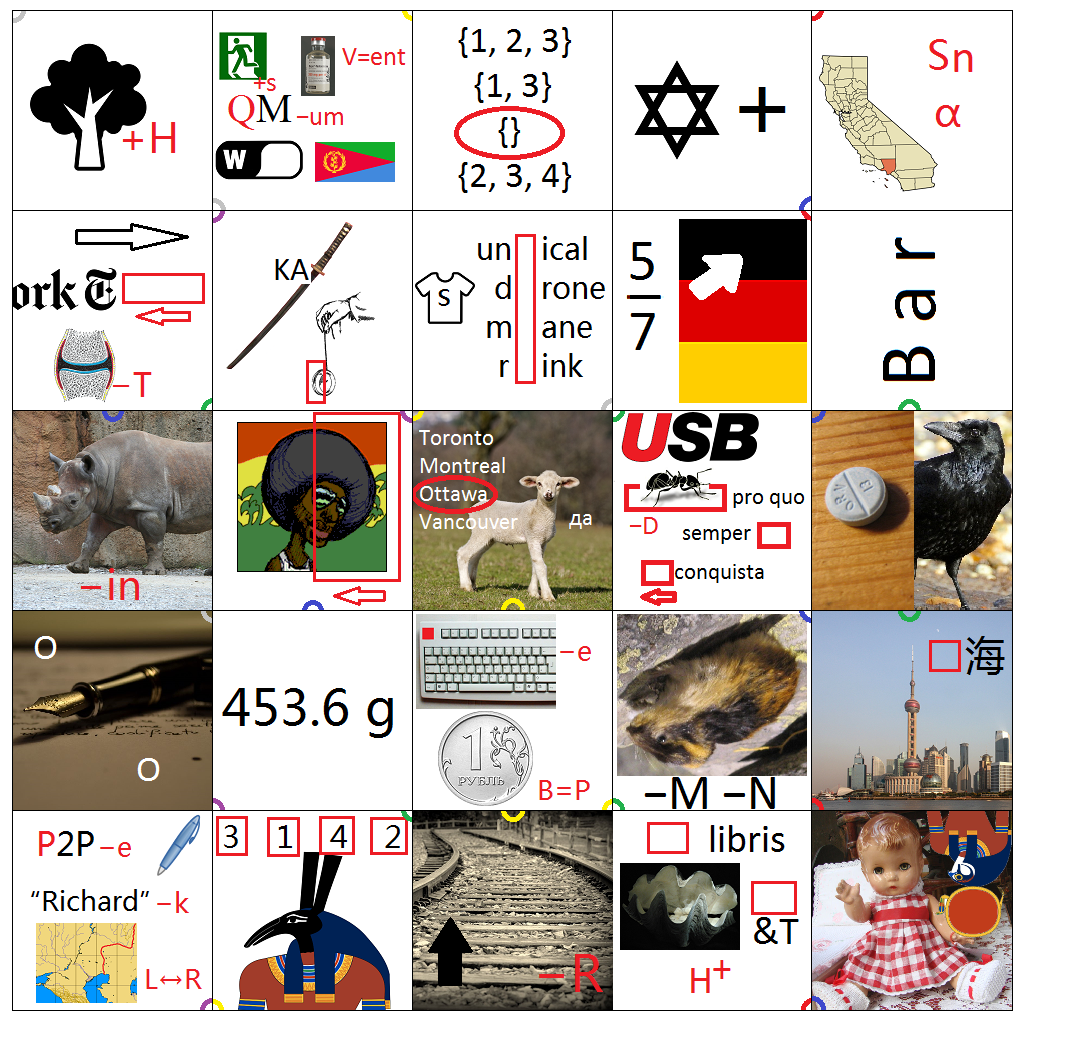 The final answer is the name of a fictional character.

I'd wager we are looking at

Start by unscrambling the image:

Assuming that all the circle segments in the corners and on the sides of the images combine to make single-coloured full circles, there's only one way to assemble the jigsaw puzzle into a 5x5 grid as required by the title: 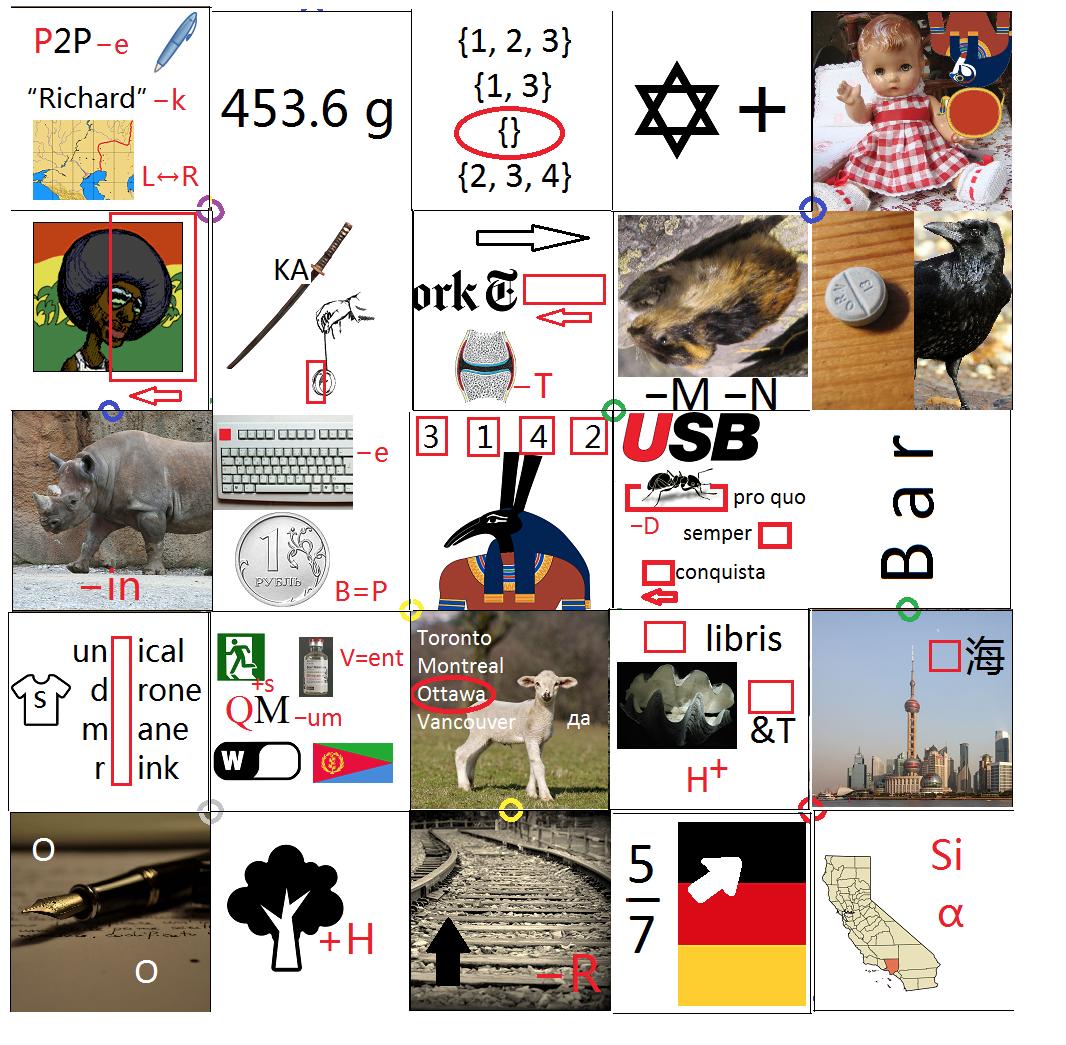 Then, solve it row by row

This is very interesting:

These all are unicode characters of some kind. Particularly of the kind that look like upside-down letters. Write them down, stand on your head, and read.

Like so: (All polished up with a little help from OP's comments below)

With a little squinting, it reads

"Detective played by Ken Stott", which finally brings us to the answer.

Appendix: Full reasoning for the individual images, in the unscrambled order:

Peer to peer, pen, dick, Ural, swap r and l to get ular

A set with no elements is called an empty set

Star of David hints at Hebrew; it is the symbol for Judaism. The Hebrew language has an alternative symbol for plus.

Katana + "ka" in the middle = katakana, one of the Japanese writing systems. Half of Yo-yo is yo, a Japanese syllable.

Arrow pointing to the right, followed by New York Times, reversed, for semi, and joint.

An upside-down (reversed) lemming, with the letters N and M removed: gnimmel

"ESC" minus E plus ruble with a letter exchanged: "ruple"

The Egyptian god Seth, with letters scrambled in the order given, to get "Tshe". (Surprisingly, didn't have anything to do with the numbers being an approximation for $1000 \times \pi$)

S means small when written on a tee shirt, eth fits all the empty spaces, creating an English word each time.

Picture of Shanghai, with the first character of the city's Chinese name hidden

Flag of Germany hints at language, the colour pointed at is black, which is Schwarz in German, picking the first 5 of the 7 letters gives Schwa.

(Original puzzle had an error, which is still visible in the unshuffled image; instead of "Si", it was supposed to read "Sn".) Map has Los Angeles highlighted for LA, Sn is the symbol for the element tin, and the letter is of course an alpha.

The 25 pieces can be rearranged into 4 groups using the coloured circles as cues, as this crude edit shows. 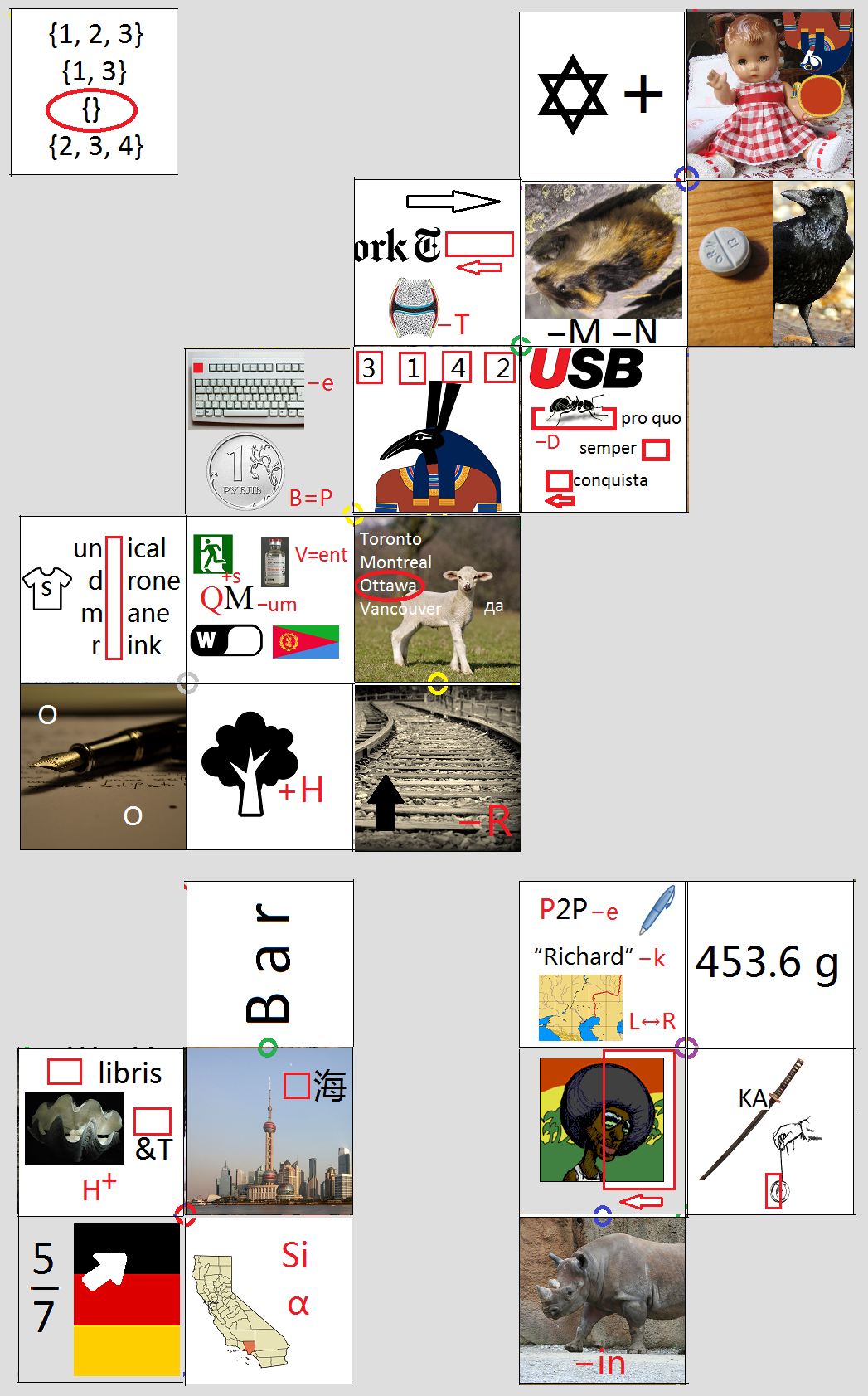 Where to go from here?

Some partials. Combine with @Weather Vane's answer to put them in the correct order for reading.

NULL or NULL SET or EMPTY?

SETH, STETH, ? = the letters that fill in the blanks are ETH, and there's an S in a T-shirt

that the squares can be rearranged into four groups if we require that the quarter-circles at some of their corners match up,

those four groups fit in a unique way into the original 5x5 square shape. Some of the rebuses are easier to make sense of than others; so far I have the following:
perpendicular pound empty-set ??star+?? ??doll??
or katakana-yo right-semijoin ??? ??pilcrow??
rho scruple ??combination-set?? quantifier vertical-bar
seth existential-qualifier capital-lambda exclamation shang
??open-o?? three ??ail?? schwa ??Si-alpha-los-angeles??
(Credit to Bass for noticing that it's specifically a right semijoin, which I hadn't spotted.)

I haven't given detailed explanations of how the rebuses work because I think they're mostly easy to see once you have the answer, but here are a couple of the subtler ones:

"schwa" is because we have the German flag, we're pointing to its black stripe, hence schwarz (German for black), and we want 5/7 of this, making schwa. "katakana yo" is because "ka" has been inserted into the middle of a katana (plus half a yo-yo). "or" is half an Afro, reversed. I don't actually believe "seth" since it doesn't seem to be the name of a symbol, but the point is that you can insert "eth" into all those gaps. "Shang" is because we have a picture of some towers in Shanghai, plus a gap followed by the "hai" character.

which makes me think that

shoover's answer has some plausible explanations for a few of my gaps, yielding

It isn't entirely clear to me what to do next;

it looks a little as if something good might happen if we read the whole thing upside down, though. (It looks a little like a word-ladder with only one letter changing at each step, but so far I can't make that work and I think it's probably wrong.) At any rate it's striking how many upside-down-E-like things there are in the second column. Perhaps the "or" symbol is actually meant to be a vertical bar and we're meant to read the pilcrow, even upside down, as a P, in which case that row yields "pixel". I suspect the open-o may be meant to be read as a D, even though to my mind that only works if we don't invert it. It's possible that the fourth row might say "fiver", in which case maybe I can pretend that the second row says "hazel" and there's a Watership Down reference going on. But so far this is all just speculation.

I bet it says DETECTIVE - LIVED BAKER STREET, in which case the answer is SHERLOCK HOLMES. (Credit where due: this did not occur to me until I saw Bass's inspired guess that in the mysterious Los Angeles box "Si" is a typo for "Sn", so that that square contains an "a".) If this is right, then clearly I have entirely the wrong symbol in the middle of the first line (an empty set) since it looks nothing like "re" or "ee".

7
A classic image rebus
19
What word does this image represent?
14
Solution Is Clearly An Image
9
What number am I looking for?
9
Ideological rebus
15
She has a unique personality
13
Contours of a clandestine nature
16
Charlie's geography presentation
20
Stella and the president's secret notes
3
An Elementary Magnum Opus