How many triangles are in the picture?

In the below figure, how many triangles are there? 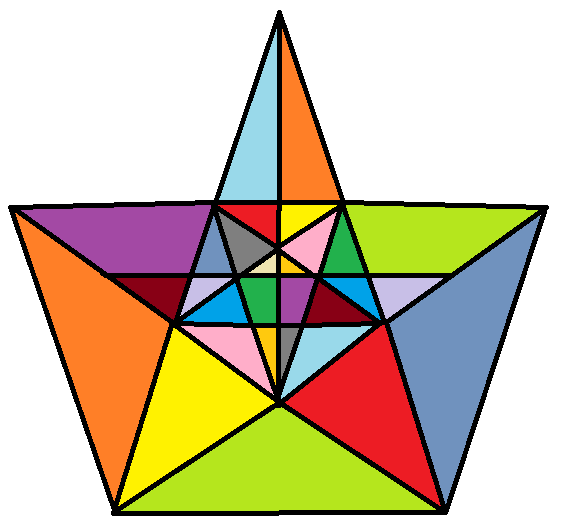 If you try solving this by counting them individually, you'll probably make a mistake and it will take longer than necessary. If you want to though, don't let me stop you :)

Optional: Time yourself and post how long it took you. Others may be interested to know how fast something like this can be done. (I'm thinking there will be a spread between 5 minutes and ~ 1 hour)

The interaction of inner and outer pentagrams makes another 10 triangles. Revised total: 105.

The interior 5 pointed star is inside a pentagon. There is a known result that says there are 35 triangles in this configuration. There are basically 7 groups with 5 triangles each.

The spaces between the points of the outer pentagram do not contribute to any additional stars.

#Vertical Line# Now lets add the vertical line. This splits the top point into two triangles, and the top space in the interior pentagram as well as bottom point of the interior pentagram. This adds 6 triangles directly, but now introduces more groupings. It also splits both the inner and outer pentagons inscribed inside each star in half. These shapes aren't triangles, but can contribute as we see later.

It directly creates 9 more triangles since it

##New Triangle in Outer Points## If we look at the newly created triangle within one of the outer star's points, it contributes to 5 new triangles. To see this, start with just this new triangle and then move the top right point to the right one vertex so that now it includes the newly created triangle made from the bottom of 2 above (1). Now move the bottom point out the middle (2). Then move the top point to the middle (3) and then again to just past the middle (4). Lastly, move the bottom point all the way to the tip of the outer point, and the top point out one more vertex (5). Since this happens on both sides, this is 10 new triangles.

Lastly, there is one more triangle that includes both of the these newly created triangles which extends to the bottom point of the inner triangle.

##Spaces between points of inner pentagram##

Of the space that was divided in two, the lower half actually doesn't not contribute to any new triangles that we haven't already counted. The upper half, however, contributes to 2 more (one with the half of the top point of the outer star, and one that uses the newly created triangles in the inner pentagon). This happens on both sides, so there is 4 more triangles.

Again, another triangle is created using both of these upper spaces and the upper point of the other star.

##New triangles inside the inner pentagon##

Of the three new triangles in the middle, the smaller ones don't contribute to any new triangles on their own, but the big one contributes to 2 more by pairing with the point on either side.

How long did I take on this? About an hour writing it all up, but not as long to find them all. 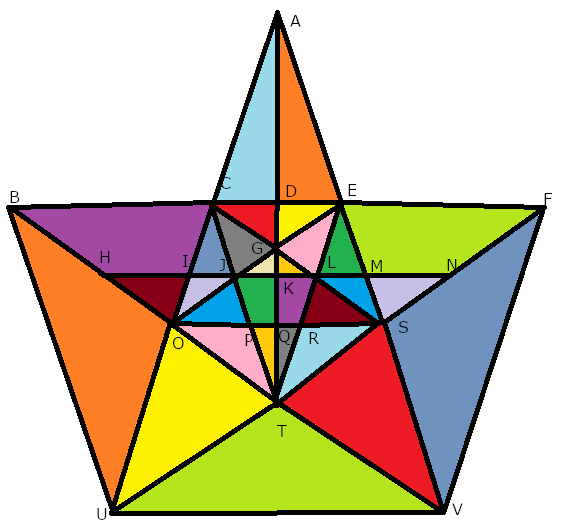 Then we have the following triangles:

7
Network connection: Create a network that guides the signal from start to goal
17
The Collapse of Memory
6
Picture List - How are they connected
8
For me, the fun begins at 9:35 UTC
21
We solved the invisible maze
6
How to get the least number of flips to a plastic chips to get a certain figure?