I'm here to ask you if it is possible to find a way to solve this problem. I'm designing the puzzle-enigma section of a video game and try to find possible solutions and mechanic for it.

Imagine each circle in the pic below is a platform and the rest of empty squares is void. Only the first platform is active and "usable"(say you can step on it). You have six characters that have to go from one side to the other stepping only on the platforms and each platform admits one to six characters a time. Stepping on a platform instantaneously make appear the following one; however getting off it instantaneously deactivate and make disappear the following one (making eventually die a character that would be on it at the moment of the deactivation).

Is it possible for the six characters to get to the other side all alive?

The only solution I found for the moment was to change the rules of the puzzle, making each platform activate the following AND the previous one; like this, you would have the six characters one on each of the first six platforms and the bottom one going time by time to the top one.

Thanks for your time guys, cheers! 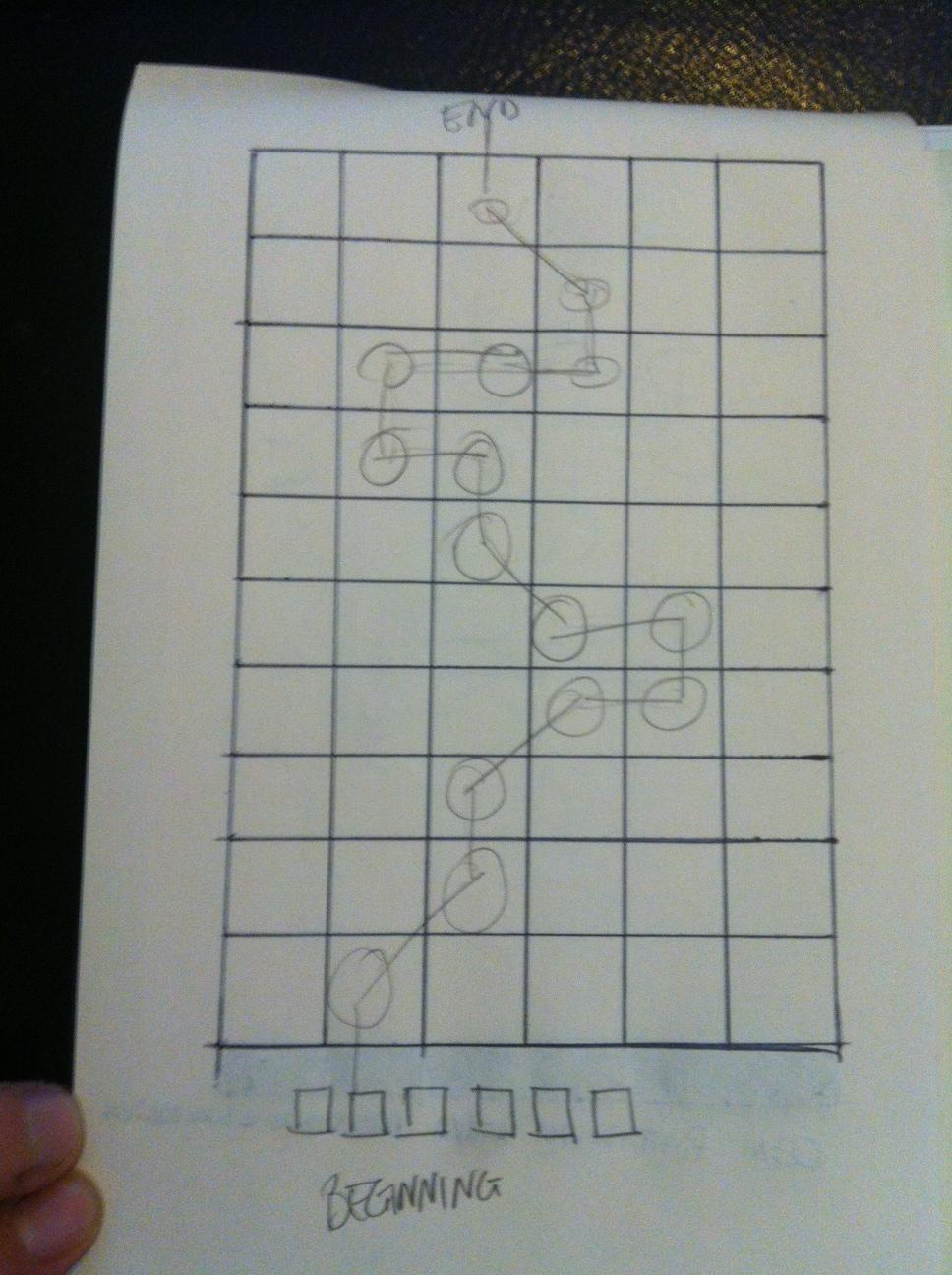 All that matters is the chain, and so far your rules are quite local. If you can get a couple steps in you can get all the way. Maybe different characters can step different numbers of platforms? For example, one might be able to go forward $1$ or $3$ spaces or back $2$. Maybe each platform can only be used some number of times? It becomes a maze in a bit of a disguise.

What about using 6 * X platforms and let different characters see different platforms(either from the beginning or during walking)?

For example, all characters step on the first platform because the orange character can see it. After this they can see the second platform (also orange). Next one is the green character that can see the platform ahead and so on... So the player has to collect information from all characters before (s)he can follow the path. 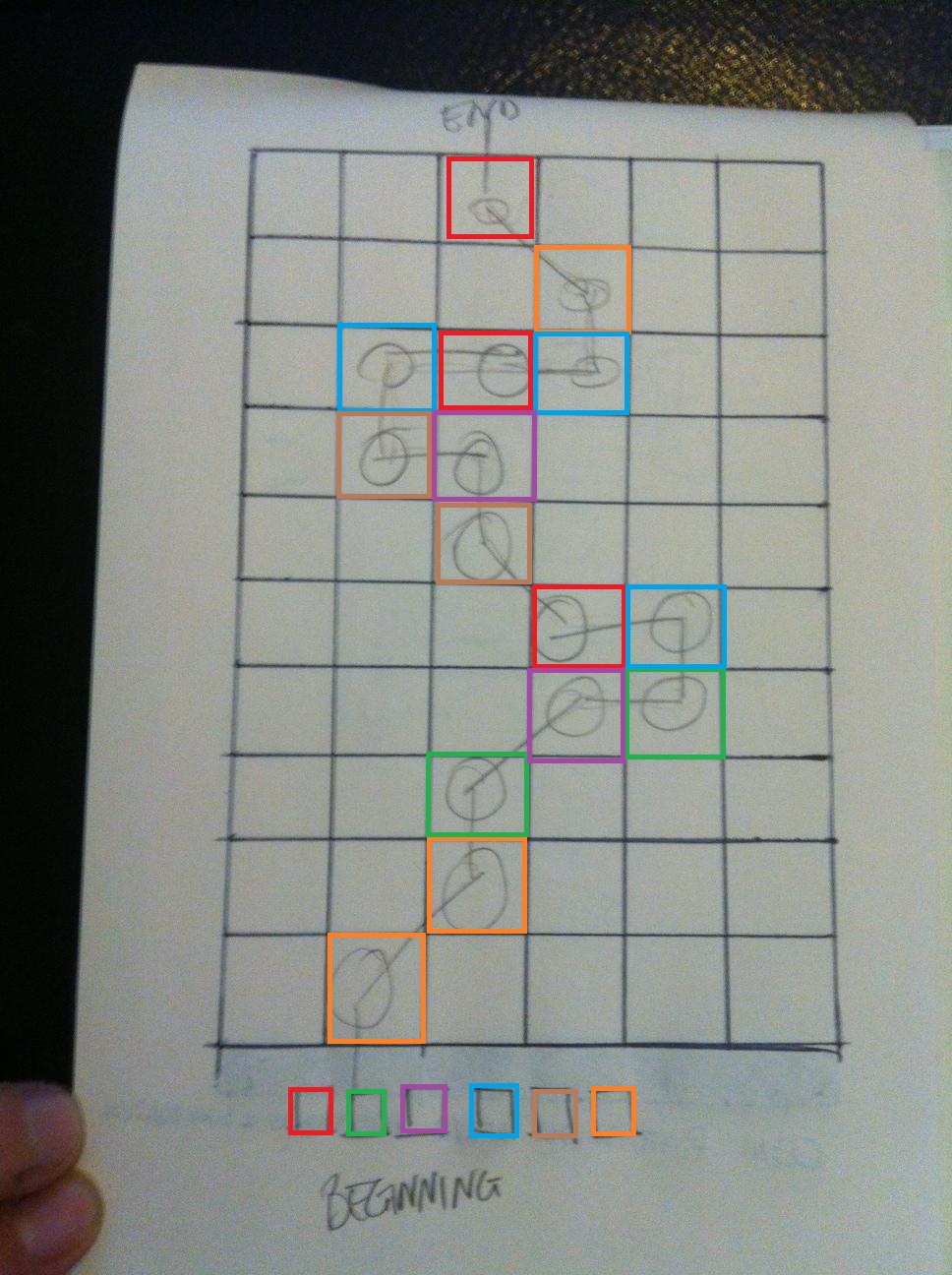 I suspect this is for a pathfinder/d&d game or something similar. I've been thinking of a similar puzzle but I haven't had to worry about putting it into practice yet.

My suggestion would be to give each tile three "stages" -- cursed/trapped, normal, and hollow. The first stage, "cursed", would have some kind of negative effect if stepped on (say, it turns the person to stone). The normal tile is a normal tile. The hollow tile stage just simply means it has disappeared (causing any petrification victims to fall to their doom and shatter).

If you make it so that stepping on a tile changes the stage of the four adjacent tiles (cursed > normal > hollow), and once a tile goes hollow, its gone forever (or until the puzzle is reset). That might make for a better puzzle.

I haven't tested it yet, but when I get home from work, I can certainly build a program in Flash that we can use to play around with it and see if it works.

Can it be a puzzle to get one character across only?

(Who can then pull a lever or such a thing to make a safe path for everybody else.)

I think I have found an interesting puzzle inspired by your question, but I'm not sure it is solvable. However, we are on PuzzlingSE, so lets find out...

I've posted it as this puzzle here.

If it works out, I think it's actually a really good puzzle ;c)

10
Pathfinding with disappearing platforms - is it solvable?

13
How do you create a general locked-box problem?
18
How to create a pure mathematical-logical based puzzle equivalent to resistance based physical puzzle?
2
The cage - a logic puzzle
10
Pathfinding with disappearing platforms - is it solvable?
7
Can you help the robot cross the platforms?
7
Logic problem about five thieves
8
Logic gate puzzle
2
Solution or Origin of logic puzzle
7
Rubik's Scramble Search