A dad wants to play a game with his 3 children this Christmas. He has a bag with 5 hats; 1 white, 1 yellow, 1 red, 1 blue and 1 black in it. The hats are all equal except their colour. He will place one on each of their heads and if they can all guess correctly the colour on their head they all get presents this year, if they get a single one wrong they get nothing.

To make things harder the dad lines the children up so they all face the same direction. Child #1 can see #2 and #3. Child #2 can only see #3 and Child #3 cannot see anyone.

With total randomness and equal probability the dad places 1 hat on each of their heads. Child #1 has to guess first then #2 and finally #3.

Before playing the game the children come up with a strategy to optimise their chances of getting Christmas presents this year.

What is their strategy? What is the probability they get presents?

I think they can get all the way to

probability of getting all three guesses right.

There's probably a possible explanation that utilises Galois fields, modular exponents and discrete logarithms, (well, more likely just modular subtraction and averages are enough) but let's instead give each kid one of these: 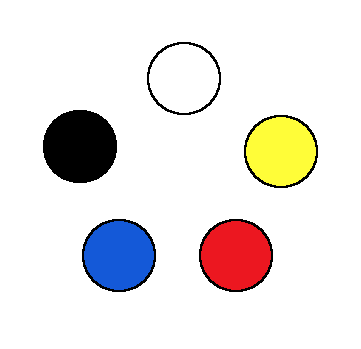 Kid 1 then observes the other hat colours, and guesses a colour

For example, if kid 3 has black and kid 2 has yellow, then kid 1 guesses blue.

Then, kid 2 guesses the only colour that is

exactly halfway between 1's guess and 3's colour that can be seen.

In this example, kid 2 sees black, and hears the guess "blue", so 2 (correctly) guesses "yellow".

In this example, 1 guessed "blue", and 2 guessed "yellow", so kid 3 (correctly) picks black, which is

This approach must be optimal, because

1. The first kid's guess can never be better than one in three, no matter what
2. The guess kid 1 makes with this system is always "possible" and never a duplicate of one of the other two colours, so its probability is one in three
3. After the first guess, the other kids always exactly know their colours.

So, yeah, that should just about do it.

I'm pretty sure there's no way to get all 3 hats correct, but

Child #2 knows the sum mod 5 of their hat and Child #3's hat, so they can subtract Child #3's color from the sum, and get their own color.

(This is assuming there isn't a lateral-thinking solution like the children being able to look at their own hats.)

Not the answer you're looking for? Browse other questions tagged logical-deduction hat-guessing or ask your own question.