In Time or out of Time, that is the question

Brushing away the tree roots hanging from the ceiling I realised that the unicorn had stopped.

The unicorn’s silver horn, glittering faintly in the now near-vanished light, pointed to the other end of the hall, blanketed in thick darkness. I glanced around quickly. I could see very little in the near-dark, but I could see the wall close by was of blank, black stone. I shivered. It was getting cold. I walked forward resolutely.

“I wish you good fortune.” came the unicorn’s voice. I looked back. I could no longer see his glimmering white coat. My nerves were now on edge. I could not know what to expect. Grasping the hilt of my still-sheathed sword, I wondered what my doom would be. Would I fail, and die, like others before me? What if I was the one who lived to make it through? Could I return a failure? I did not come with the hope of living, but to rescue my people from the One who tormented them.

Time will come, for oppressor to fall,
Time to stand forth, the hero undaunted,
Time will reveal his name on the wall,
Time will be his, till doom accomplished.

Do not be fooled, believing the lie,
Stars in the water, instead of the sky.

Once foot is set in the Path of Knowledge there is no turning back. One alone shall survive, one alone shall destroy the evil for ever.

I mulled over the prophecy in my mind. The scholars who had trained me seemed to think that it would be revealed to anyone who walked in the Path of Wisdom whether he was the hero. I would soon find out.

Soon I felt the far end of the hall looming up black above me. I could not see anything, until a thread of blue light caught my eye. I looked, and saw a rectangle made of lines as fine as hair, the size of the door-way at the other end of the hall. I put my hand out, and it only met with more darkness. Yes, it was a doorway. I strode through. As I did so, I felt it close behind me. There was no going back. I drew my sword and walked slowly forward, touching the walls of the narrow passage from time to time to make sure they were still there.

Suddenly the walls ended, and I was in an open space. I stood still, wondering where I was, and what would happen next. Then in the dark I saw lines start to appear. I walked closer. The lines were moving and broadening, creating something. After a few seconds I could see writing and what seemed to be clocks. I watched for some time; the clocks moved at the same pace, but much faster than they ought! The times were also different. Then they suddenly stopped. This is what I saw: 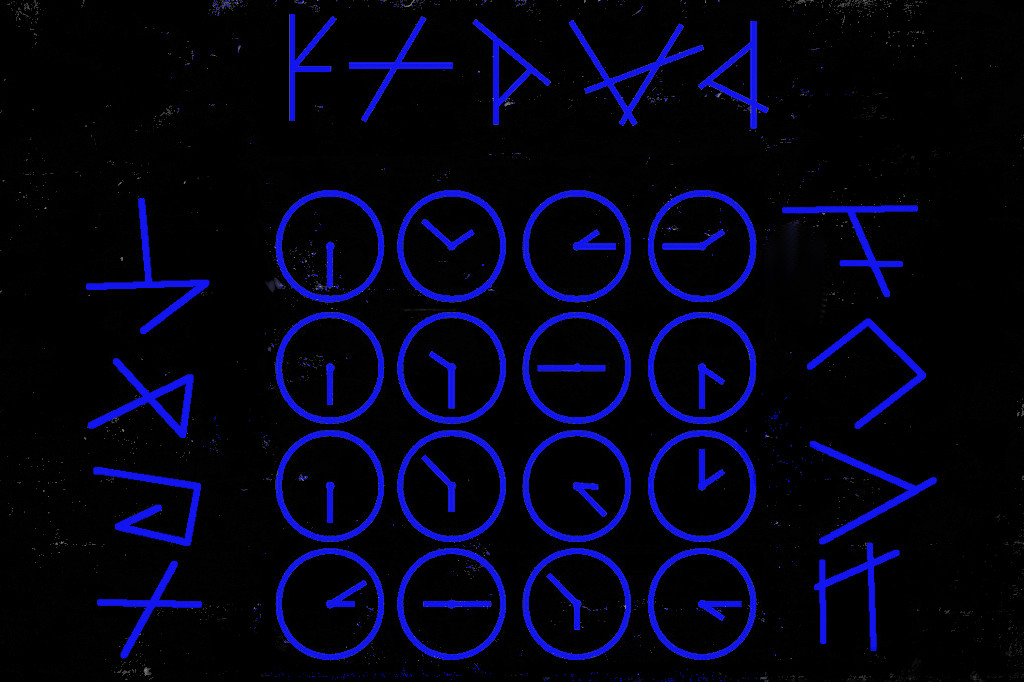 The inscription was plain, and in my mother tongue. It read: “Your time is running out. Can you read it?”

Time will reveal his name on the wall.

Written by me, first posted here

YOU
ARE
THE
HERO

I used the Flag semaphore

to decipher it. To know more about it see here

The hint was really helpful. It signifies that you have to

take the mirror image of the given image and then apply the Flag semaphore to decipher it.

6
The man, the weapons, the time
10
Tipsy Time Travel
5
The evil Doctor Doozit with time
4
The Unknown Drink
8
A Letter: Moriarty is dead
23
The last question to the guards
7
It's time for a real difficult question
10
The highly public trial of Capo di Tutti-Capone
8
A manager's dilemma
14
The Case of the Poisoned Poet