You cannot have 120 degrees of separation, but how close can you get?

If you take a look at a standard three-hand gear-driven analog clock, there is never(see footnote) a time of day where the hands of the clock divide the face equally into 120 degree segments, but you can get close.

What's the nearest set of angles you can get, and what time does it occur at?

Bear in mind that on an analog clock, gears are used to provide the motion of the hands. For every 360 degree rotation of the seconds hand, the minute hand proportionally moves through 6 degrees. For every passing minute, the hour hand moves half a degree (30 degrees per hour). Hands do not "stick" to a division and then instantly jump; all hands (even the seconds hand on a clock that ticks) describe an arc and thus move through fractions of a degree. A clock showing 8:20pm will have a seconds hand at 0 degrees, a minute hand at 120 degrees and an hour hand at 250 degrees thanks to the extra 10 degrees the 20 minutes added on.

Note: a similar question has been asked before here, but it was phrased as "is there ever a time of day?" and the answer is "no". This question asks how close you can get and what time does it occur at.

Fair warning: the related question on this site does include an unsubstantiated (no working) but spoiler obscured answer to the "what time?" aspect though the other question didn't ask for it

The answer that @jarnbjo found is demonstrably the best possible.

"Because of the continuous motion, and the way [OP has] defined 'best', I'm pretty sure the exact (infinite decimal places) best will be when the hour and second hand meet at exactly 120°. Any slight deviation from this will move the second hand away more than the minute hand moves closer..."

and I stand by this, to elaborate:

OP defines "best" by averaging the absolute values of the differences of the three angles from 120°. If we put the hour and second hand at exactly 120° and the minute hand at 120° plus x, then the differences are (0, +x, -x) which averages to 2x/3. If we try to move it a tiny bit to bring the minute hand deviation closer to zero, the second hand will move away from zero 60 times as fast.
Now OP's "continuity" thing was a bit confusing, but I interpret it as follows: either they are moving at a constant speed; or there are one-second ticks, but even so, for a mechanical clock, the motion from one tick to the next takes a finite time and is continuous, and the three hands are moving in a 1:12:720 ratio. So you do still get a 120° conjunctions of hour and second hands somewhere, and the three hands will be in the same positions as they would be in the constant speed case. (As for time, it would be within one second of when it would be in the constant speed case, though exactly what fraction of a second, that will depend on the nature of the ticking.)

So now I am going to

which sounds like a pretty random thing to do, but

Therefore we know that the solution involves

Now OP told us that the perfect 120° conjunction doesn't exist. But what does OP know! Let's try to find it

Well, I guess OP was right. Ok, next best thing.

And the mirror image solution

Converting this into hours, minutes, and seconds

Which is what @jarnbjo found. Yay!

After a little bit of coding, I found this solution which I believe is correct: 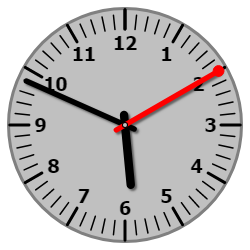 There is not a particular solution . If there is one solution then there are such many solutions . In other words if angle between hands is a , b and c then it can occur at 12 times ( for proof see below) . Just fix the hands and carefully rotate the clock you get the visual.

I came up with the same puzzle myself and wrote up my solution before finding your web site. Even though my metric for a best answer was different, I got the exact same answers:

My derivation is quite difference. Is there a way to send a pdf attachment?