What is the largest number of cubes that can be cut?

Consider a cube made up of 27 unit cubes. If you consider a plane going through the middle of the larger cube it cuts through a number of the unit cubes. The number of cubes that are cut depends on the orientation of the plane.

How can you arrange the plane through the middle of the larger cube so that it cuts through as many unit cubes as possible? What is that number of unit cubes?

This is best possible for the following reason.

Pair cubes up with their "opposites" (with all coordinates negated). Suppose our plane has equation $ax+by+cz=0$ (the RHS must be 0 because of the stipulation that the plane passes through the centre of the cube). Since the problem is symmetrical under reflection in any coordinate plane, we may without loss of generality assume $a,b,c\ge0$. Since the problem is symmetrical under permutation of the coordinates, we may in fact assume $a\ge b\ge c\ge0$. Now consider the "all-$+$" and "all-$-$" corners of the cube; I claim we can find four cubes near each corner that are not cut by the plane.

in either case we have found four cubes on each side of the plane that aren't cut by it and therefore there are eight uncut cubes. So the 19 cut cubes we get from $x+y+z=0$ can't be beaten.

This one is pretty hard to visualise in 3D (at least it was for me), so my first approach was to analyse a 2d square, made up of 9 unit squares.

No matter how you align a straight line moving through the square, the most unit squares you can touch is 5 (assuming that a perfect diagonal line does not slice a square by touching its corner.

Extending this representation by adding another dimension we can vary our line by, and we can hit slice some extra unit cubes.

If the line is shifted up and down towards the ends of the cube, we can nab 2 extra unit cubes on the sides of the larger cube, one on each side.

Using this proof, my answer to the number of unit cubes you can slice through is:

An image representation of Gareth's answer 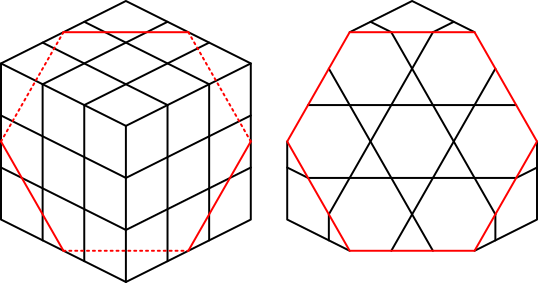 Counting the number of surfaces in the right image shows 19 cubes cut.
Interestingly, the cross section consists of 7 perfect hexagons and 12 equilateral triangles.

7
Maximum number of pieces of equal area you can obtain by cutting a pizza a certain number of times
1
Cutting the Cheese
7
A big cube and 99 smaller cubes
26
How many cubes can we fit in?
9
How many cubes are crossed by a diagonal?
13
Sharing a Cake with 7, 8, or 9
5
How can I cut a cube so that all its vertices except for two mutually opposite vertices are equally distanced from the plane of the cut?
9
Hollow Cube Cuts
1
Least cuts to get 44 rods from a metal grid