When did I make this puzzle?

I was flipping through some of my old puzzling notebooks, and I found an old puzzle of mine I don't quite remember.

I tried to find when I made it (I put the date I made all of my puzzles on them), but I couldn't.

After looking at the puzzle a bit more, I figured out... that's what I had to find. 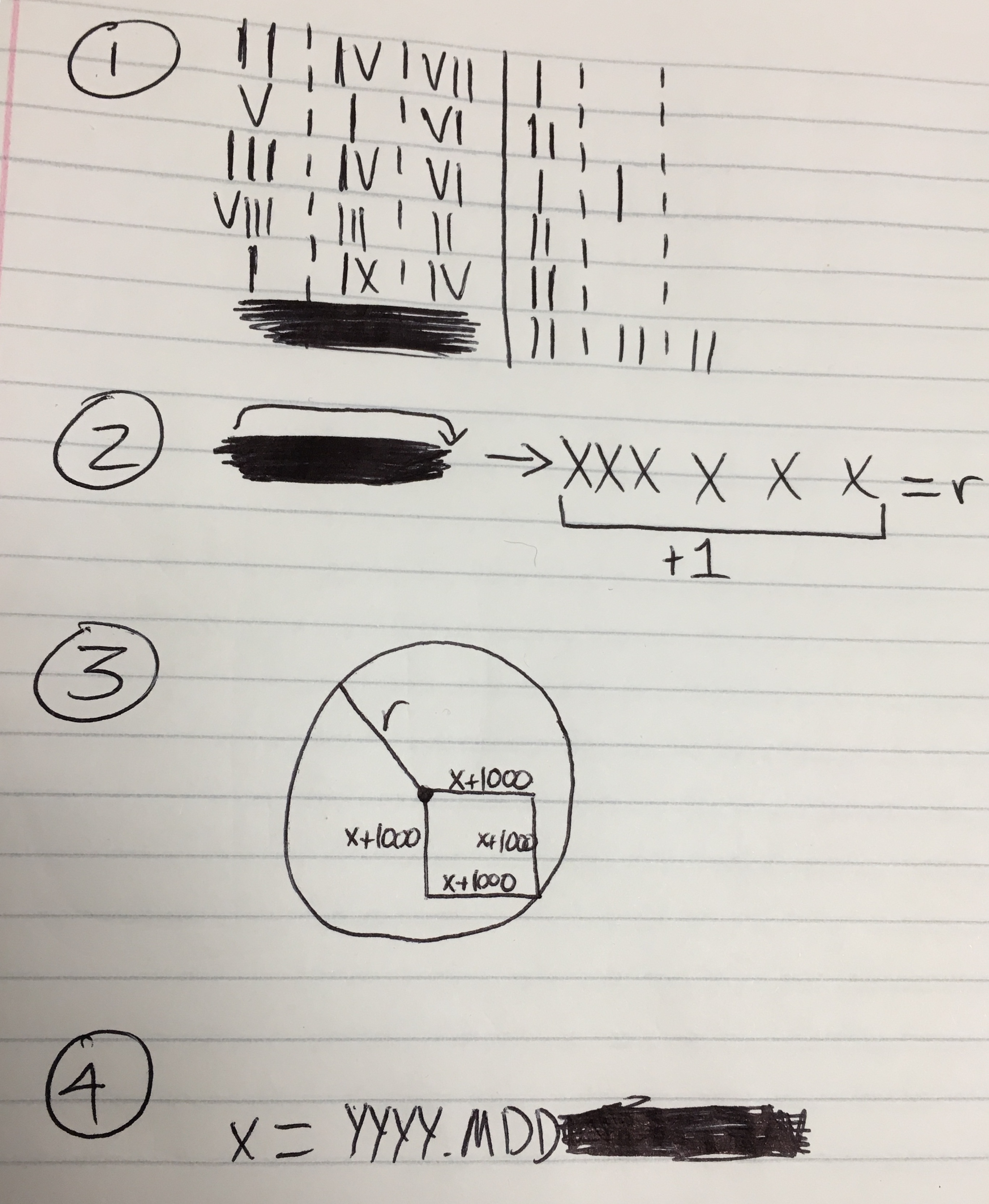 I eventually figured out when I made the puzzle... but... can you?

Note: I believe my younger self might have missed something on the geometry part. The shape with all sides equal is a square.

You need to be a mastermind to solve part one.

Building on the answer from Mohirl, they got parts 1, 3, and 4 correct, but their mistake was in part 2.

I believe the answer to part 1 is

I suspect the hint is talking about

the Mastermind board game

which means that the numbers on the right for each line

indicate how many of the number on the left of the row are 1) correct but in the wrong position or 2) correct and in the correct position. Analysing these should give the correct values for the last row

So, starting with row 5:

We have a 2 on the right hand side, so one number is in the correct position, and the other two are wrong. Either the first digit of the hidden code is 1, the second is 9, or the third is 4. Lets assume 4 is the correct one (since that's the one we have most other information about). That means neither 1 or 9 are in the code.

Then based on row 1:

4 is correct, but in the wrong position, and neither 2 or 7 are in the code.

we already know 4 is in the wrong position, but so is either 3 or 6. 6 is in the last position in both rows 2 and 3, but it can't be right in one but wrong in the other. So 6 is out, and 3 must be the other correct but misplaced digit.

That means that row 4:

is telling us that 3 is in the second position. Which we already knew, since it's not the third (that's 4) and not the first (it was in the wrong place on row 3). So 2 and 8 are out.

And since we now know what the last two digits are, row 2

must be telling us that 5 is correct in the first position. So we have 534 as the answer for the missing row 6.

Take the answer from part 1, and

If that's a square, then

The result from part 3 should

I assume that step 3 will return a decimal number for x, and that the date of the puzzle creation can be determined by taking the first 4 digits as the year, the 1st decimal place as the month, and the 2nd and 3rd decimal places as the day of the month.

If step 1 is a matrix, it is unsolvable on its own because of the unknown third variable on the right side. If you attempt to solve the first five lines, there is only the trivial solution. Assuming, of course, that the symbols are literal roman numerals. I suspect that this is not the case.
Step 2 seems to suggest that shifting the first character of the answer to step 1 to the end of the string becomes XXXXXX when one is added, or XXXXXX is a set of replacement characters for the string (suggesting it is 6 characters) that becomes the radius of the circle when 1 is added.
Steps 3 and 4 appear to be self-explanatory

Not the answer you're looking for? Browse other questions tagged mathematics enigmatic-puzzle geometry or ask your own question.

3
Entertaining the Clumsy Coin Flipper
11
Missed A Connection
22
The Temple of Puzzling
19
Why didn't this kid get any presents from Santa?
9
Undeviginti - An Enigmatic Puzzle in the theme of the Ancient Times
12
What did they kill Bob to hide?
5
What did Louis do to measure the cardboard box?
6
How many possible different shapes are there on a 4x4 dot grid?
13
An Interesting Puzzle Box
7
Board of Important Numbers