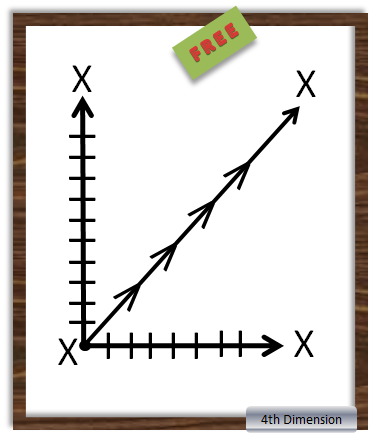 The artist in the market is giving this painting for free (the last one on his rack). I asked him if I can take it but he replied "Why should I give it to you?" The frame could be useful but I dont want to tell him that so I ask him why should he give it for free. He answered "because I miss to paint something into it". It looks like straight edge drawing to me but I'm curious so I asked him what is missing in his painting. He told me that I can take it if I figured it out. I offer to buy it if he would tell me but he just refused while people are now gathering around the painting. What is missing?

I think the painting is meant to portray:

Four dimensions - because that appears to be the name of the painting.

But it is missing:

One of the dimensions. Possibly depth, or the 'fourth' dimension'.

The commonly recognised three dimensions are height, width and depth. The fourth dimension is considered to be either the concept of time in physics; but in geometry it can be the direction of movement of the 3-dimensional object. The painting appears to have axes for height and width with marks to denote some kind of scale. The diagonal line in the middle of the painting has arrows instead of scale markings. Perhaps this denotes time (because time only travels in one direction), in which case the painting lacks depth. Or perhaps it is meant to denote depth, in which case it is time that is missing.

It also occurs to me that:

The action of taking the painting away would technically add the fourth dimension of movement to the existing three, so maybe that is why the artist is inviting people to take it away?

I'm no art critic, but I'd still say

The painter missed to paint something into it, because

he wants to depict a nice projection of the 4-dimensional coordinate axes, but that takes 3 dimensions, so his paintbrush literally misses when he tries to paint outside the plane of the canvas.

The painting is missing:

the artist's signature, so it is obviously a forgery, hence the price tag.

The painting is missing

It has 4 Xs but only three axes.
Read both aloud, enjoy the verbal pununciation, realize "4 Xs" does not equal "3 axes" and tell the painter he needs one axis more (not only for this reason but because, obviously, the titular 4th Dimension needs a 4th axis to be represented on a graph). The missing axis must be the 4th dimension one for Time.

Take your painting home and enjoy the new frame.

the arrows on the diagonal axis (not the last one) should be replaced with strokes to represent intervals.

thanks to @Bass, the picture lacks depth, and therefore the intervals on the diagonal axis should be of increasing distance from the origin.

I've got a feeling that the image should have been drawn like this: 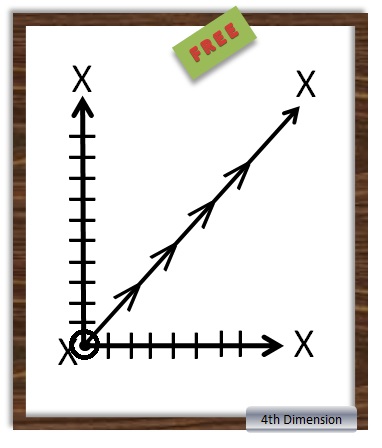 Another possible solution is: 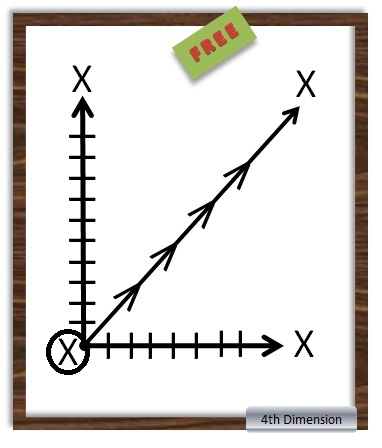 Not the answer you're looking for? Browse other questions tagged pattern visual letter-sequence time or ask your own question.