After this puzzle has been solved, it is time to offer our clever solvers another Loser Chess game to reconstruct...

Do you remember that I often pay a visit to my friends Fabi and Mag on evenings ? Most often I find them bending over a chessboard. They love to play chess, but once in a while, they experiment with Loser Chess instead of the more mundane game. It was the case last night, and when I arrived Mag, sitting in front of the white pieces, was thinking in this position: 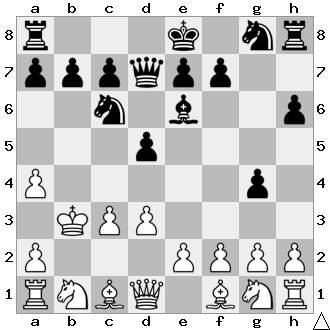 Usually Loser Chess involves lots of early captures, but here only one bishop was missing, so I was surprised when Fabi told me that he had already played his 18th move !

Can you help me understand how they reached that position ?

In Loser chess, the rules are the same as in classical chess but for the following points:

This problem was created by Michel Caillaud in 2006.

The first (easy) step is to find out on which square the single capture has happened.

When this problem was first published, it came with the header "Le refuge secret", which translates to "the secret hiding place".

My solution (found shortly after instantsoup)

The game in an animated gif:

I think this is it: https://lichess.org/ftOCzIHy

First step, finding out the capture:

bxa3, which means Ba3 had to happen.

Time to clean out the black squares for the bishop!

EDIT: I can't cut that down any more and it's at 19. I think the king moves too much. There also isn't a secret hiding place.

The white bishop hides in h8!

I think white has to clear the d2 square for the black bishop somehow. We can get there in 19 moves...

13
Reconstruct a game of Loser Chess

17
Fairy Chess #1- The Mastermind
4
An Antichess Puzzle
24
A Warped Chess Maze
28
How did four chessmen disappear?
10
Fabi and Mag played chess again
13
Reconstruct a game of Loser Chess
11
One-sided chess: Can you stalemate yourself?
7
An Atomic Proof Game
5
Conway's Game of Life... Chess Edition
8
Three-player chess on a 7x7 board