One-sided chess: Can you stalemate yourself?

You sit down to play a game of chess. Your side has the white pieces, arranged in their regular starting positions. One problem: your opponent has left, and has taken all the black pieces!

Can you, by making regular chess moves with only the white pieces, maneuver your pieces in such a way that you eliminate all possible moves for yourself?

1) No black pieces are on the board.

2) You are allowed to remove some, or none, of the white pieces from the board originally, before play begins. Once play begins, however, white is only allowed to make a sequence of regular chess moves.

3) There is one exception to rule #2: you must retain a King. You are not allowed to remove the white King before play begins.

4) The pieces that you originally choose to keep must begin in their normal beginning locations. So, for example, whatever pawns you choose to start with must begin on your second rank.

5) As a consequence of rule #4, you are not allowed to start with more than the usual amount of white pieces.

6) The pieces move normally. In particular, you will not be able to capture any pieces (since white pieces cannot capture each other, and there are no black pieces). In particular, capturing en passant is clearly impossible. However, you will be allowed to castle (assuming the King and Rook involved have not yet moved), and pawn promotion works as usual.

(In particular, assume that there are plenty of white pieces lying around. So, if you want to promote all 8 of your pawns to Queens, you can find enough white Queens to continue playing. It's just the black pieces that are gone!)

7) The point is to achieve a stalemate, not a draw. Thus, draws by threefold repetition of a position, or by the fifty-move rule, etc., do not count.

8) In case it matters, those other draw rules will not be enforced at all. So, if you need to make fifty-one consecutive moves without moving a pawn, that's fine. (I don't think there's any advantage in repeating a position three times, though...)

In short: in order to succeed, you need to achieve a board position where no "regular" moves remain for white.

According to rules 2 and 3, you are allowed to begin play with only a King. However, this choice will not succeed, since a King on an otherwise empty board will always have moves available.

This puzzle was inspired by @Ian McDonald's comments at: Mate in one with NO PIECES?

Already posted this as an answer to another puzzle, but here we go :)

Remove both knights and the queen. Then promote three pawns into a bishop and two rooks. 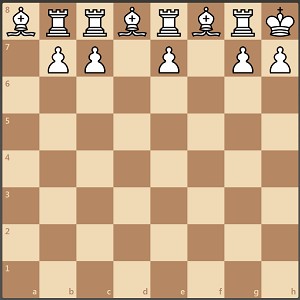 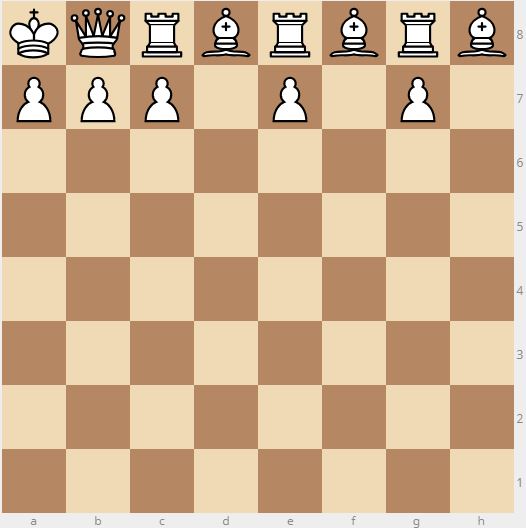 There are plenty of variants of this idea. For example: 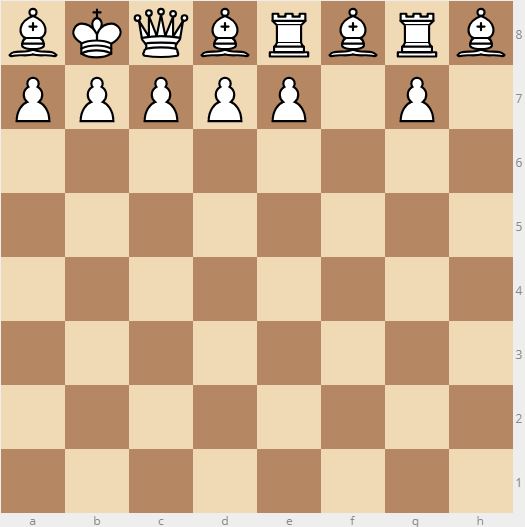 14 pieces; we start by removing both Knights.

I am not sure if

13, as shown in Jafe's answer, is the minimum number of pieces needed for a solution. (A trivial lower bound on the number of pieces required is 4, and it doesn't take too much work to improve that to 5.)

Similarly, I am not sure if

Finally, I am not sure if there is any solution which

uses one or more Knights. Note that any solution which uses more than 14 pieces must use at least one Knight, so if 14 is not the maximum then there is a solution with a Knight. Equivalently, if it's impossible to use Knights, then 14 is the maximum.

Anyway, to achieve the latter solution,

immediately advance your f- and h-file pawns and promote them to Bishops. Next, play g4 followed by Bg2 and Ba1. Place your other original Bishop similarly, with d4, Bg5, Bd8. Now maneuver your King, Queen, and both Rooks into position. Finally, advance all remaining pawns.

I believe this works, in response to two conjectures by @mathmandan: 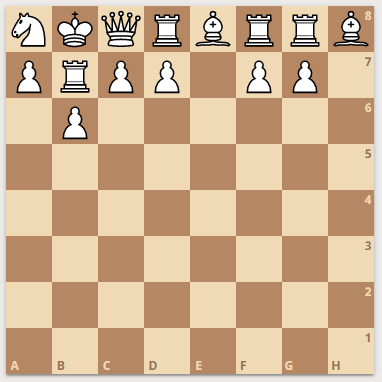 33
Mate in one with NO PIECES?
14
No moves at all, not even to put yourself in check