My five years old pupil Magnus is really on fire !

After three wins in the first, second and third games, he is playing White today in round 4 against one of the tournament's favorites (a child who already has a Elo rating, 1070 I think).

I could not witness directly Magnus' first three games, but today I swallowed my coffee in less than thirty seconds (it was too hot, it burned my throat), hurried from the bar to the playing hall, and... alas, I was stuck in a waiting line before entering the hall because an over-zealous guard was insisting on performing full security checks on every one coming in.

I did my best to keep quiet until I could finally walk in, reached a spot from where I could see Magnus' board, and had a second of bitter disappointment: are the players already putting back the pieces on their starting squares because the game is finished ? Did I miss all the action once again ?

Hum, no, the clock is still ticking, both players seem fully concentrated, so the game is still going on ! I will finally be able to watch the end of a game of Magnus' with my own eyes ! Here is the position: 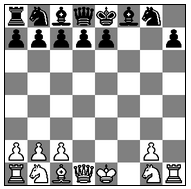 Black's hand hovers over the knight on b8, hesitates, finally grabs it, brings in to a6 - but doesn't let it go; Black startles, changes his mind, the knight is released on c6, and my heart skips a beat. Magnus can mate in one move !

The thirty seconds that Magnus spends to think on his next move feel like an endless torture to me. But when I am almost collapsing, he suddently jumps on his chair, flashes a bright smile, grabs his queen, jams it on h5, and proudly announces "Checkmate!" with such a loud voice that all the other players in the hall turn their head toward him. I gasp quite loudly myself, and I realize that I had been holding my breath for all that time.

As usual, Magnus couldn't write the moves on his scroresheet but only marked them with a bar. There are ten bars in the column for White (the last one is very large, as if a checkmate deserved a bigger bar!) and nine for Black.

Can you help me figure out what happened before ? How did they reach that weird position after White's 9th move ?

Find the chess game that reached the position on the board above after White's 9th move.

I think I have a solution