I am at loss. Of the memory!

I remember that I was running with an errand from the King, that I had to take a certain item from the treasury and deliver it to a certain person in the kingdom! Yet silly me - I bumped my head on the ground and forgot the details completely.

The only hint I have left is this weird parchment from inside my pocket: 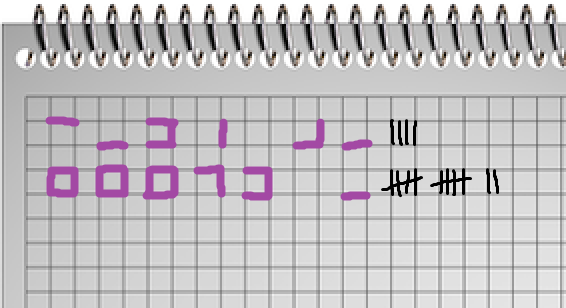 Please tell me - what could it mean? What was my mission here?

The purple symbols can be interpreted by:

Imagine overlaying each shape with a four sided square; wherever there is an overlap, remove the line completely. What is left are two words UNICORN and LION.

Could be a unicorn horn, with the four tally marks suggesting 'horn' as a four letter word.

Lion ... Could suggest the king (king of the jungle)? But can't see how the twelve tally marks could fit here.

Unicorn is Scotland's official animal, and the lion is England's, and together they're part of the UK coat of arms. They're also part of a nursery rhyme, in which they fight for a crown, with the lion winning (hence the tally marks).

So, my guess is that you need to get

And give it to

Not the answer you're looking for? Browse other questions tagged cipher enigmatic-puzzle or ask your own question.

162
Merlin and Hermes: Mysterious Lines
17
My friend is lost in time!
13
Jack Sparrow and The quest for the missing Compass . Part 2
4
Room 40 - the Great War "Mystery"
10
Mystic Markings on my Washroom Wall!
2
King Arthur's Sandwich Secret
24
We have an important mission for you
12
A Musical Mystery: Part 1
9
Where are they being held?
20
Twelve Labours - #03 Golden Hind