lolcatz can haz ur infinit cheeseboard

This is a problem on an infinite chessboard with pieces called lolcatz. They can move like queens or knightriders, but have a strange disadvantage...

... you've never heard of knightriders? Well, they're long-range knights. They make an odd number of regular knight moves in the same direction at once. Knightriders can jump over pieces, except those on the intervening squares that it could have landed on. (So, b1-e7 only requires c3 to be vacant, d5 can be occupied.) Like regular knights, knightriders land on a square of opposite colour to their starting square.

There are no knightriders in this puzzle -- just lolcatz, which have rook, bishop, or knightrider moves available. The squares that can be reached by a lolcat in one move are illustrated here. 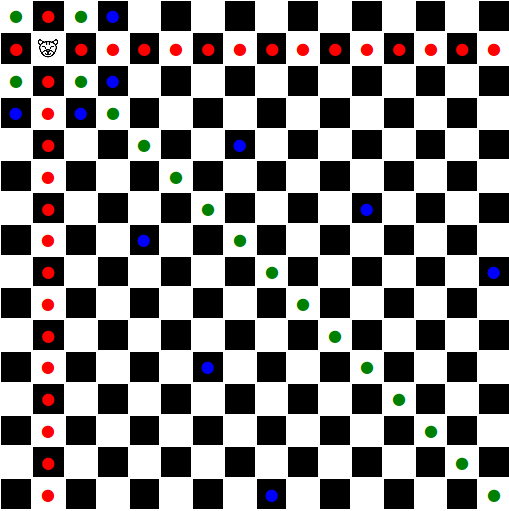 Other than that, the puzzle involves standard chess pieces with their usual moves: pawns, knights, bishops, rooks, and queens (no kings).

Anyway, as I was saying... lolcatz have a strange disadvantage: if a piece captures a lolcat, or lands where it could be captured by an enemy lolcat in one move, then, the piece gets to make an extra move. Though it has to transmogrify first, naturally...

...how does transmogrification work, you ask? Well, if you've ever seen a transdimensional kitten playing with a hypersphere of cosmic yarn immersed in de Sitter space, then it happens pretty much they way you think it does:

If multiple cases apply (due to multiple enemy lolcatz), then the moving player chooses which case applies.

The puzzle is this: There is an initially empty chessboard that is infinite in all directions. First white chooses any square to place a white bishop, then black chooses any (empty) squares to place any (finite) number of black lolcatz. Then white moves first. Win by capturing all enemy pieces. Does white have a winning strategy? Or can black place lolcatz so as to evade white indefinitely, or force a win?

No that's not a mistake: white, with a single bishop, versus as many lolcatz as black wants, in any position black wants.

Still have questions? Here's some fine print which tries to anticipate them:

The fine print covers all the relevant questions that I could think of, but if anything is still unclear please ask!

Unless I'm mistaken, the result is

Reading through the wall of text, the rules seemed a bit too complicated for it to be "just some random game", so figuring out the magic seemed interesting.

To figure out if the bishop can capture all the lolcats on his first move, we need a "hitbox" for the lolcat; that is, the set of all those squares from which there is an extra move path to capturing the lolcat.

Since a bishop, rook, queen or a lolcat can always reach the same rank as any lolcat, we can start on that rank without loss of generality. We'll also assume that the lolcat is on a white square as in the example picture.

If we end up on a white square, our distance from the lolcat is even, and since we are now a bishop, we can halve the distance by moving to the diagonal, turning into a rook, and moving back to the lolcat's rank. Notice that if (and only if) we ended up at an even distance, there won't be a knightrider square away from lolcat we could reach with a rook move. This will turn out to be important. 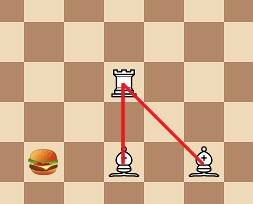 (Sample moves for getting from distance 4 to distance 2) 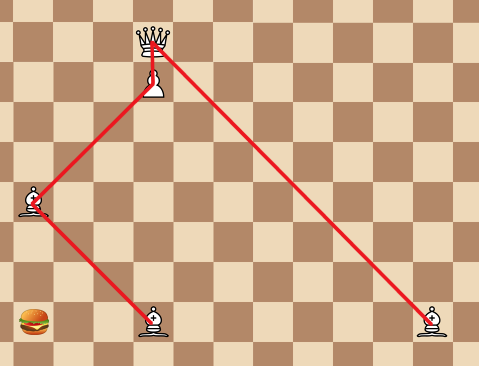 (Sample moves for getting from distance 3 to distance 10.)

All this changes in the near vicinity of the lolcat: if we can get the distance to 1, then we can capture the lolcat: 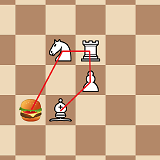 So to recap: Our horizontal distance is N. If N is even, we can halve it, and if N is odd we go to 3N+1. If we get N to 1, we capture the lolcat, and get to hunt the next one with the same strategy.

So if we could always get from any N to 1, then the bishop would always win on the first turn: every lolcat would then have an infinitely long continuous hitbox. So all we have to know is: can we always get to 1 using this process?

This method of generating the next number is known as the Collatz Sequence. Lothar Collatz of University of Hamburg conjectured in 1937 that the answer is "yes, you'll always reach 1", but to this day, there is no definite answer; the problem is often said to be completely out of reach by the current mathematical methods.

In addition to that, a very strong reason I believe this has to be the intended solution is that

"Lolcatz" happens to be an anagram of "Collatz".

As for the strategy of the lolcatz player:

If the Collatz conjecture surprises us, and there indeed is some number M, from which the process never reaches one, then the lolcatz player can forever evade capture, because there is a hole (by necessity, several actually, but that's not important here) in the hitbox: after the bishop is placed, put a single lolcat exactly M squares left of the bishop. (Count the squares very carefully. If M exists, it will be larger than several quintillion, all numbers smaller than that have already been checked by computer.) The bishop cannot obviously get to any winning square, so after going around in useless circles, the (now multiply transmuted) bishop will probably want to stop at some point.

* If the bishop stopped at a transmutation point, the lolcat can, of course, just capture the piece and win. (It's probably worth mentioning, that the stopped piece can only be a queen if it is stopped on such a transmutation point; the queen's only allowed move is to go to such a spot.)

* If the bishop stopped after making any other move, the lolcat can become a copycat, and make the same move (eg. 42069 squares northwest) that the bishop last made. This is always possible because of the versatility of the lolcat: every regular chess piece's every possible move is available to it. Since this resets their relative position to a "known non-winning" position, the bishop can never catch the lolcat.

* The only exception would be "skipping the extra move after transmuting into a queen", but luckily the rules say that if you pass the extra move, you also have to skip the transmutation, so copying the pawn's move is quite enough to save the lolcat. EDIT: to address Leo's concern about "what happens if the pawn move is blocked by another lolcat" (also answered by Destructive Lemon in the comments): If the pawn move would be blocked, then the previous move must have ended at distance 1 from the blocking lolcat. Bon appétit.

(Note: I'll be using regular chessboard diagrams to illustrate this.)

the only way a lolcat can be captured is if a piece transmogrifies into a knight, exactly one knight move away from it. 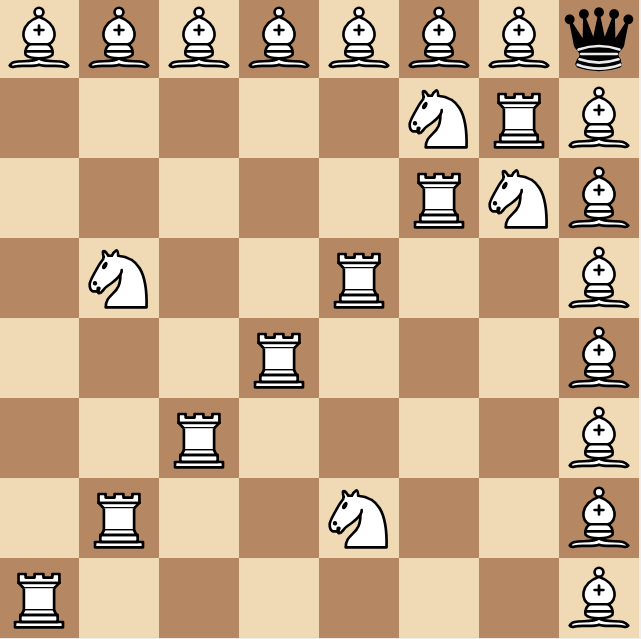 This diagram shows what a piece landing on each square transmogrifies into (assuming it is moving towards the lolcat). Note the board is infinite so this goes in all directions.

Alright, now we can attack the puzzle.

An optimum setup for Black would be to place two lolcats so that whenever one is captured, the other one can capture back (considering the capturing piece is now a lolcat.) The second lolcat can't directly defend the first, because the captured piece would transmogrify into a lolcat, then immediately get another move and capture the other lolcat. Placing lolcats on d1 and f9 seems to do the trick...

BUT there's a problem! Once capturing and transmogrifying into a lolcat, the new lolcat immediately gets another move. In this case, the new lolcat can move to d8, transmogrify into a knight, and capture the second lolcat. SO, we need to find a setup where Black has a connected network of lolcats where, if one lolcat is captured, another one can recapture AFTER the new lolcat makes a move.

Basically, we need to use a lolcat as bait.

I'm not selling this well, am I?

Not the answer you're looking for? Browse other questions tagged mathematics logical-deduction strategy chess or ask your own question.