Out of character comment: For effect, don't open up the next spoiler until you've finished the statement before. If answering, please explain each remark. 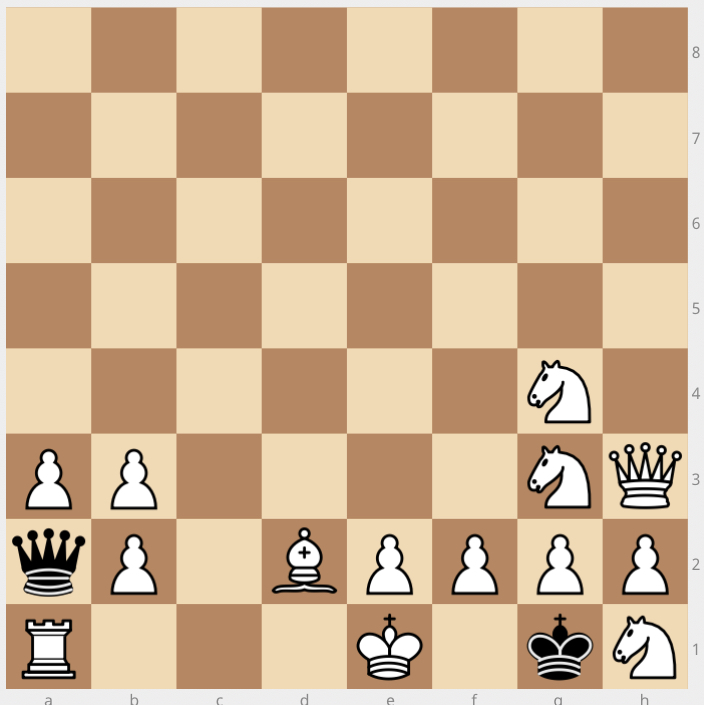 Solve the mate in 1.

Hold on, that doesn't work. Surely we can find a longer path to victory then?

Wait a moment, that doesn't work too. Let’s switch things around with a mate in 2.

Hey... is this position even possible? Oh, it’s really easy to see that can’t happen… or is it?

Castling is impossible, surely the white king must have moved to allow the black king there, so there can be no solution. (Also, there must have been a lot more traffic there as well: the black king might have captured the f-bishop on its way, but getting rid of the h-rook takes a much more elaborate manoeuvre.)

Couldn't find a very interesting non-working mate in 2, only many silly ones. Will keep looking.

An assured path to victory:

1. Rd1 - Q-anything 2. Ne4 avoids getting mated by the black queen while forestalling the stalemate that would have been black's next idea. Surely white's material advantage is enough to win after that.

As to the final question:

There's an unmoved pawn guarding every square on the 3rd rank except b3. The pawn on b3 must be the c-pawn, so also b3 has been guarded or occupied by the c-pawn the entire game. There's no way the black king could have gotten past the 3rd rank from its starting square, so the whole position is impossible.

EDITED after the sudden appearance of the corner knight:

In the original problem without the knight in the corner, the immediately preceding moves were uniquely defined:

The white knight in the corner removes this possibility, so it cannot be white's turn to move. Since it's black's turn, there is a mate in 2:

In the comment given to all answerers at the time of the edit, OP says he placed the knight at a8, suggesting that the board is the wrong way around. This seems impossible, because then there would be two white pawns giving check at the same time, and that cannot ever happen.

The stuff in the spoiler tags got shuffled around too, so let's recap:

is this position even possible?

The rest have already been answered. This one has, but I disagree with the conclusion. It is possible, if we are operating under the 1862 Rules of the British Chess Association. Those rules allowed for Pawn promotion... to Pawns. Thus, while the positioning of the pawns under modern rules means that the Black King could not have reached its current location, under 1862 Rules this restriction does not apply, and since nothing in this map specifies that this position did not occur in, say, 1863... The position is possible.

Solve the mate in 1.

Hold on, that doesn't work.

The white king must have moved in order to let the black king to g1, so castling can't be allowed in this position.

Let's switch things up: solve the mate in 2.

Wait a moment, that doesn't work too.

I have a hunch the answer is "it can't be black's turn in this position" but haven't figured out why yet...

Since I am not sure for which colour you are requesting this...

Checkmate in 1 for white, possibly: Castle the King on e1 with the Rook on a1
This could be possible since the Queen is not attacking the path of the King.

Checkmate in 2 for black: Queen takes on A1, then after Bischop to c1 then Queen takes Bischop for checkmate.

Not the answer you're looking for? Browse other questions tagged no-computers chess retrograde-analysis or ask your own question.