The Wheel of Judas

I was studying up on some pretty archaic methods for testing intelligence and I came across one called The Wheel of Judas. It is said that if you were able to fully solve the wheel that you were a danger to the kingdom and were sentenced to a lifetime of servitude outside of the capital (pretty brutal punishment for being smart). It was pretty confusing at first, but over time I managed to solve it; I am wondering if the community can do the same?

The wheel can seem a bit overwhelming at first; I heavily recommend you take your time when studying it. 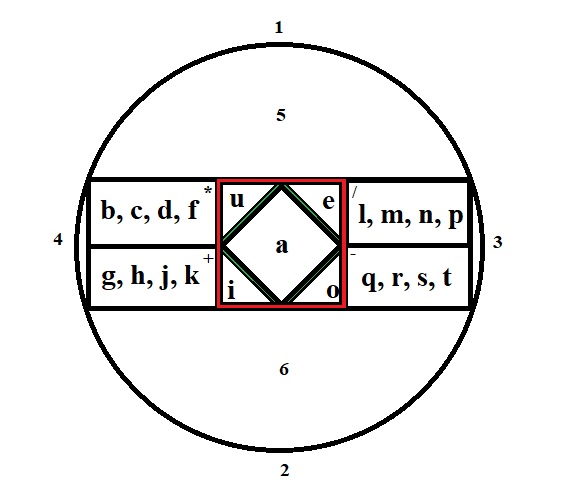 The way it works is quite complicated so I will break it down.

The wheel will rotate a total of $4$ times from it's starting position above. Each rotation is $90^\circ$ to the right at a time; however, you may think that everything will rotate but the inventor was quite a genius! The wheel is broken down into five categories, which function in different ways:

The Outer and Inner Numbers

As stated above, this portion of the wheel is pretty simple. With each rotation, the outer-numbers rotate $90^\circ$ to the right; the inner numbers simply swap back and forth. For example:

This is where it gets tricky, especially once the rules are laid out. The mathematical containers house the consonants of the alphabet and rotate through the order of operations (PEMDAS) with each rotation of the wheel. For example:

The Vowels and Word Plates

These sections are stationary and do not move with rotation. The cool thing about the vowel chamber is the rules that apply to it:

The word plates are where your chosen words go. They are located under each number. Once a word is placed within a plate, it cannot be moved to a different location. This means that a word placed at number $1$ at startup, will be at number $4$ on the first rotation, $2$ on the second, and so on. To clarify:

Note: The words given in this example will not count in a correct answer, no matter their placement.

Assuming the wheel is in its current state, a correct word pairing that meets the basic criteria would be chant and guac. The reason behind this is:

Since there are many possibly combinations due to there being thousands of words available to choose from, the first technically correct answer will win. If the answer happens to be the answer I also arrived at, then I will award a $+50$ reputation bounty when I am able.

What are six words that meet all given criteria for all four rotations?

If you have anything you need clarification on, please let me know so that I can clear it up prior to your attempts at an answer. I tried to be as thorough as possible, but this can seem confusing and quite a daunting puzzle in my opinion.

This is a rather difficult puzzle, and I had a really difficult time creating it. Here's an idea that may help you:

A simple approach (but difficult to accomplish) is to find words that jump back and forth.

With that pairing if you have three sets of words that start and end with the same letters it will work after the rotations because the rotation change what two words are compared.

First word I chose before the word plates rotate is bait, placed in spot 1 (before numbers rotate), after first word rotation tab is made and placed in spot two, next rotation make tac in spot 3, then coat in spot 4, then dear in spot 5, then rad in spot 6.

Bit of a cop out with this pairing. Still looking for a more complex pairing solution.

Not the answer you're looking for? Browse other questions tagged riddle word knowledge story or ask your own question.

8
Magic Time-travelling Baktun Wheel
1
Find the word with numbers
13
Find the ascending words from the clues
7
Broad Strokes - missing letter riddle
13
Hit the Bulls Eye with T in the Center
5
As the Ferris wheel turns
4
What is the longest sentence using each vowel only once?
9
Words that link to other words puzzles
3
Anagrams, synonyms and antonym