I went for a coffee at the beginning of his first game ; he was White against a boy slightly older than him, maybe a 6yo, so he was a bit afraid of facing the "big guy". To my surprise, when I reached the playing hall a few minutes later to see how he was doing, the game was already over! I found him soon after in the analysis room where he welcomed with a bright smile: "I won! I took his pawn with my rook, and it was checkmate!".

I congratulated him, and took out my chessboard in order to review the game with him. Alas, that's where I faced a problem: I had seen none of the action myself. Magnus is 5 yo and cannot write down moves yet, but the arbiter asked him to mark each move with a bar: on his scoresheet there are five bars in the column for White's moves, and four bars in the column for Black's moves: it had been a very short game indeed!

My pupil's memory didn't help much: all he could tell me is that he started the game by moving a pawn.

Can you please help me recontruct this game ?

Find the chess game where White plays a pawn on move 1 and mates with 5.RxP#

The second round has just started, this time Magnus is playing Black, his opponent is even bigger, at least 7yo, but Magnus' morale is so boosted by his first win that he went to the playing hall full of self-confidence - and didn't listen much to my advices... Ok, time for me to go see how he is doing !

Why did I bother telling you that White's first move was a pawn move ?

Someone commented that freeing the rook so that it could take a pawn with check requires four white moves. This is not correct.

Magnus : "you know, at first I didn't even see that I was checkmating, I was just so happy to take his pawn because it was the first time I ate a black unit in the game."

"Meanwhile Black had already eaten one of my units for several moves, so I was a bit nervous, because I remembered what you taught me : having less material is generally not so good."

"thinking about it, maybe it was rather a pawn on the side that I played on first move, because I remembered only too late of your advice that we better start with center pawns and then I regretted my choice. But I won anyway! "

Challenging for how few moves are involved.

So the question to me become

which pawn does the rook take to mate? in 4 black moves, the black king can only be at a square within 3 squares of it's initial position (it can not move the first move)

So looking at each possibility:

Assume the King is on the b-file, either b6 or b5. it can not reach anywhere else on the b-file because that would take at least two non-king moves and 3 king moves. Then the pawn the rook takes must be the b7 pawn or the d pawn that moves to let the king out. The black bishop must still be on c8 so it would be able to take the rook after Rxc7+, and there is not enough time for white to set up a double check, so Rxc7 can not be mate. Therefore, the rook would have to take the d-pawn on d6 or d5, to check the king on b6 or b5 respectively. Both of these would be met with Qxd5. Again, white does not have time to set up a double check. So the king is not on the b-file.

Assume the King is on the c-file. he could be on c8,c7,c6,c5. Starting at c5: This can be achieved only by moving either the d or e pawns 1 or 2 spaces and using the remaining 3 moves to move the king to c5. So the Rook must take the pawn either at c7 or e5 or d5 (depending on firt move). c7 and d5 are protected by the queen. e5 is possible, and it takes 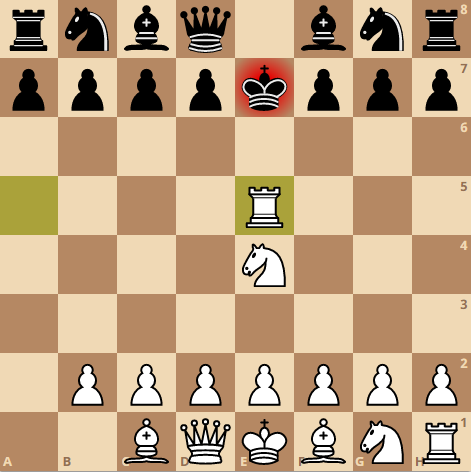