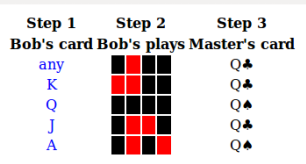 18
Guess my number! Pay for the answer!
38
The subtraction game
7
Alternate Face Up Poker with Alice and Bob (on the floor)
22
A game with 52 cards
7
Two players playing the SET game
14
Strategy to beat the Casino reversed
2
Master and Slave versus Bob: hard version
2
Master and Slave versus Bob: easy version
8
No point shuffling, just pick your cards
7
Alice and Bob play at cards