The Corridor of Eon Syras

An entry in Fortnightly Topic Challenge #39: Deep Down in the Dungeon 1. tl;dr at the bottom

You and your wacky group of adventurers barge through a hidden door and end up in what looks to be the start of a corridor. The door slams shut behind you, leaving you in darkness. Despite your group's best efforts, it won't budge! You're stuck. You take a step forward and suddenly torches that were mounted on the walls light up, one after another in a rapid spree until you can see everything! Well, at least everything in this section of the hall. Looking to your right, you see words carved into the walls -- it reads:

Hah! You think you’re so clever
Believing you’re done at last
Well I’m eager to tell you
the worst has yet to pass

A Corridor with panels and traps of killer gas
No tricking, avoiding or escaping its grasp
Keep in mind those before
And let their remains warn you
Because there’s no second chances here

As you finish reading it aloud, the group collectively outbursts in despair, "NOT AGAIN!".

What you thought might be a treasure room or an escape out of this unrelenting cave system is actually another trap. DARNIT.

Whelp, there's nothing to do but continue onward as it said. You walk down a bit and reach a pile of dead bodies...which really doesn't look promising. Looking to your left you see four square plates embedded in the wall. An Eye, a Pyramid, an Ouroboros and a Drop. 3 are pressed in, but one of them (which has a Pyramid embossed on it) is still protruding.

After some discussion, you have all decided that the 3 plates that are already pressed in must have released the killer gas and not reset. At least something is FINALLY working in your favor. You press the Pyramid plate down and something clicks....but nothing seems to be happening.

You take a hesitant step forward and aren't dead yet...so you all continue on. As you go down the corridor you find random bodies littered around in various states of decay, perhaps they tried to outrun the gas or who knows what, but they are definitely dead.

You come across another pile of bodies, with another 3 plates pressed in and another Pyramid remaining protruded. You press it in, hear another click, and continue on.

This cycle repeats a few times and you're feeling like your luck has finally changed! All these people died so you don't have to! You proceed to press in a Drop, an Eye, a Pyramid, as Ouroboros and a Drop, each with great success.

Everything is going swell...until you reach the 8th panel. Only two are pressed in. Uh oh. 50/50 chance. What are you going to choose? The Ouroboros or the Drop?

If you make it to the next section, you will find that only one will be pressed in, the Pyramid.

And if you make it past that, you'll see the end of the corridor, you'll be almost there! However...there is one more set of plates on the wall and NONE of them are pressed in. It seems you'll have been the only ones who have made it this far...so now what? Which one will you press? 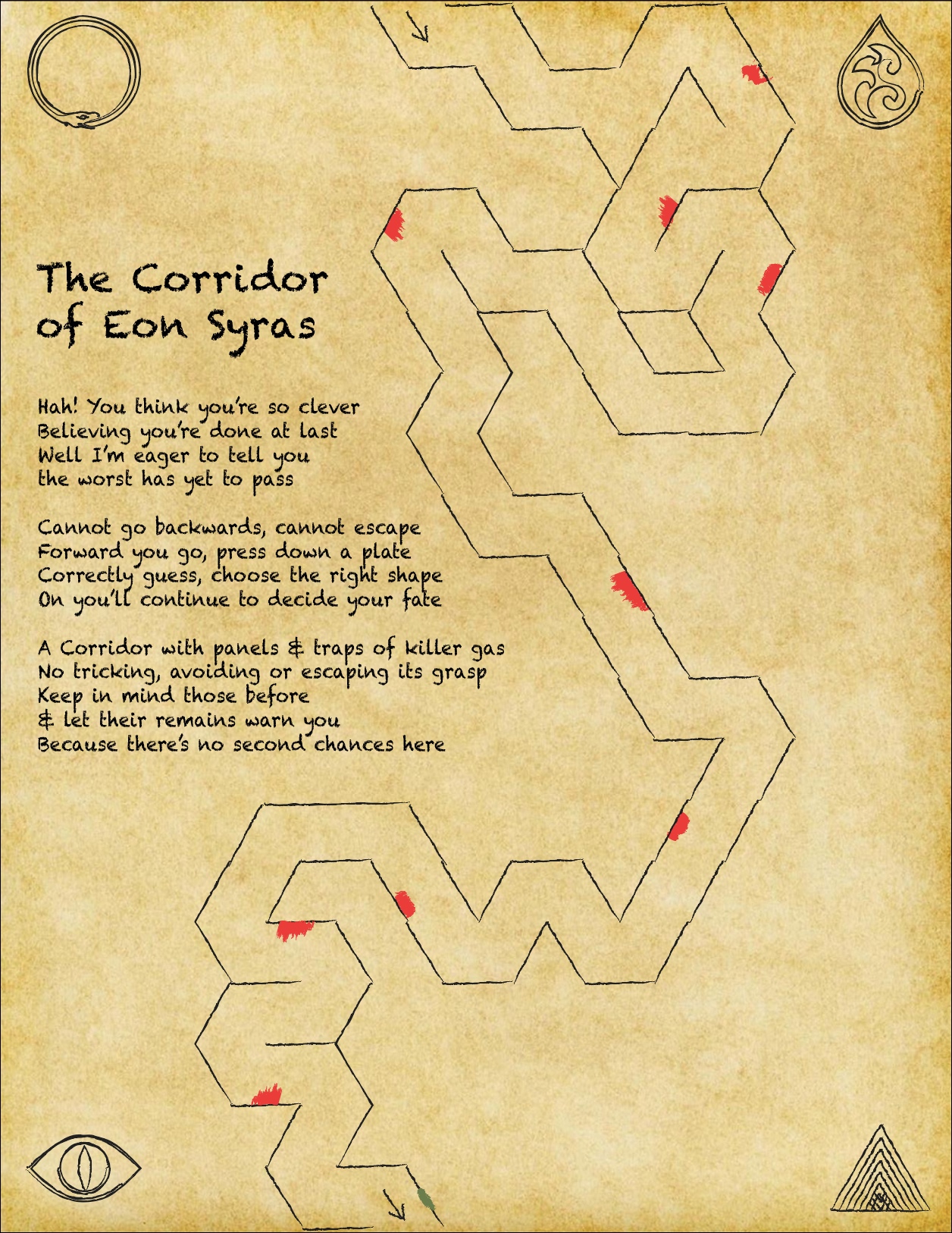 Map is a visualization of the corridor. Bloody marks are where the panels are and the final panel is marked in green at the bottom.

TL;DR: Which plates need to be pressed in to get past the last three sections and why?

Hmm well what exactly is a corridor?

Inspired by The Thirteen Doors of Aj Noc'la by Alconja

One thing I noticed about this puzzle is that:

As noted in Zenth's answer, the shapes of the different symbols, (and the order in which they are placed on the corners of the map,) suggest that the shapes can be assigned numbers based on the number of corners that they have. The values are:

Let's also mark up the map:

There is one other clue:

As noted in Braegh's answer, one verse in the inscription contains the lines "Keep in mind those before and let their remains warn you." The word "remains" suggests the modulus operation.

Putting it all together:

This gives correct symbol for the first seven panels, and shows that the last three symbols are Ouroboros, Eye, and Drop!

I have some ideas about the shapes:

The Shapes and Iconography lead me to believe there is a number correlation to the symbols. Since the icons each have a place where they come to a "point", and they are written in this order on the image from left to right.

This leads to some issues though in discerning the pattern, I'm working on trying to relate it to the map, and only prior information, but not making too much headway.

With regards to the map, I'm wondering if the red marks where the panels are are "accurate". Specifically The first bloodied area could be on a flat or a point of a "triangle" pattern that would fill the room. (I've done numerous space walking patterns that almost fit but usually break down later in the hall.

For the entirety of my answer, please refer to the legend below:

This is a great puzzle! I really enjoyed reading the story, and it has sort of an Indiana Jones feel to it! +1 From me!

@Zenth brought forward a brilliant idea that the plates are in a numerical order based on their positions on the map. This order is:

Considering the fact that most human beings use a $1$ based numerical system, I believe it will actually correlate to:

@Stigeon also brought forth a good idea to use mathematical operations to discover the remaining plates which would be a really cool solution to this.

Currently, the plate order is as follows:

I suspect there might be some hints hidden in the text:

"Keep in mind those before"

I suspect this is referring to the previously pressed PLATES and not the dead adventurers.

"and let their remains warn you"

If we're going along a number sequence track - could "remains" be referring to remainder-after-division aka modulus?

previous adventurers, when confronted with this corridor, would either (a) press one plate down at each panel or (b) attempt to move past the panel without pressing anything, possibly shifting from strategy (a) to (b) at some point which may or may not be survivable. Let’s also assume that reasonable adventurers would not try multiple plates or start to push plates after surviving without touching one. Unspoken assumptions such as there’s nothing apart from the adventurers that’s interacting with the panels also apply.

Under the assumption above, this is inconsistent with the possibility that

there are plates on panels 1 through 6 that cause death, because that would result in subsequent panels having less plates pressed in

and therefore, it would be reasonable to deduce that

the other panels aren’t dangerous either.

Which is all consistent with

there having been three groups of adventurers that would each hit a random plate up to a certain point where they, convinced that plates do nothing and corpses were brought from elsewhere for intimidation, would stop doing so; plus zero or more groups that would disregard the panels at all.

So the strategy is

to do whatever, but be ready for the next corridor being less forgiving. After all, there’s a corpse source nearby.

Not the answer you're looking for? Browse other questions tagged riddle enigmatic-puzzle visual or ask your own question.

76
The Thirteen Doors of Aj Noc'la

20
Can you solve this logic puzzle in disguise? The color code behind the tomb
9
The Younger Brother
7
The Case of the Missing Kitten (Part 1)
18
Jump to the 13th dimension
8
A seriously confuse recipe - or is it?
24
The Curse of the Ancients
26
Stargate escape
12
Missing, 'till the very end
8
A three-step puzzle