Your party has defeated the previous riddles in the dungeon. The next room you enter is pitch dark - neither the light from your torches nor the firefly quickly conjured by the wizard penetrates the wall of darkness that starts two steps from the door. You guess that the room is huge (you have yet to encounter a small room in this place) and empty (at least nothing attacks you right away). On the floor near the door (which of course has closed as soon as you entered) is a battered shield. Looks like somebody took their last stand here... 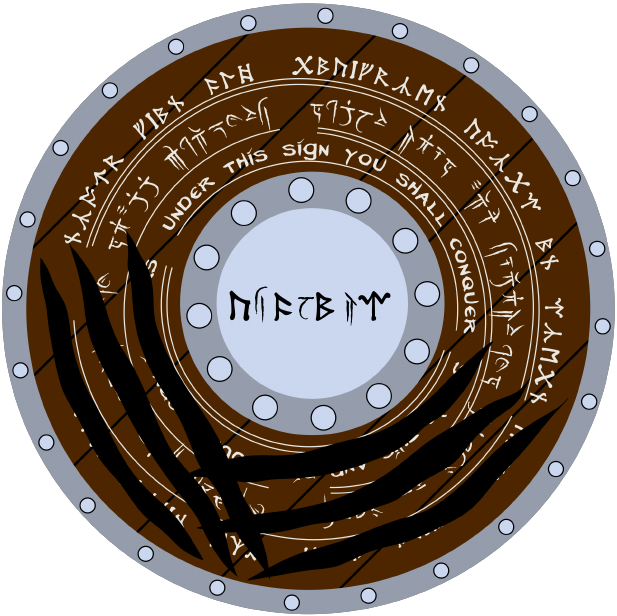 What kind of monster awaits you here?

The three texts in the shield

From here, let's gather up all letters we know about the double-underlined line in the middle script.

Fill in the now-known corresponding letters in the outermost script.

SOLVE THIS AND RIGHTEOUS GLOR? IS ?OURS -> "Solve this and righteous glory is yours"

Now we know all the letters and can figure out the text in the middle. The monster we're facing is...

Certainly a force to be reckoned with!

11
Lights in the Dungeon: Hooty and the Message
28
A-maze-ing Wordsearch
4
An enigmatic sudoku
3
Falcon Circus, Chapter 1: The Predator
7
Should Dr. (Indiana) Jones do it? Another Jones Adventure
76
The Thirteen Doors of Aj Noc'la
20
The Corridor of Eon Syras
9
Disciple of Gzemnid
23
Welcome to the Dungeon Zoo!
10
A device he have a great interest in