The Thirteen Doors of Aj Noc'la

Having finally defeated the tyrannical wizard Aj Noc'la, your party makes its way through the door at the rear of the throne room. Presumably the dimly lit archway leads to the treasure vault...

"I wonder what he meant by 'exiting through the gift shop'...", the party's rogue muses aloud, recalling the wizard's hysterical, dying words. By way of answer, the air is split by a thunderous crack, as the door slams shut behind you. Spinning, you scramble to reopen it, but instead find only solid stone. Then, staring in disbelief, you watch as a gently glowing inscription etches itself across the wall:

Gaze upon this thing of wonder,
'Neath a sky where stars align.
Then with heavens torn asunder,
From the shadows comes a sign.

In the runes, the truth is dawning.
Can you hear which door will save?
Make your choice, but heed this warning:
Twelve doors hide an early grave!

Turning again, your eyes are immediately drawn to an enormous structure, floating weightless in the centre of the cavernous room. It is made up of nineteen identical cubes, suspended high above your heads by some unseen force. Affixed to the ceiling are a pair of glowing orbs, lighting the configuration from above. 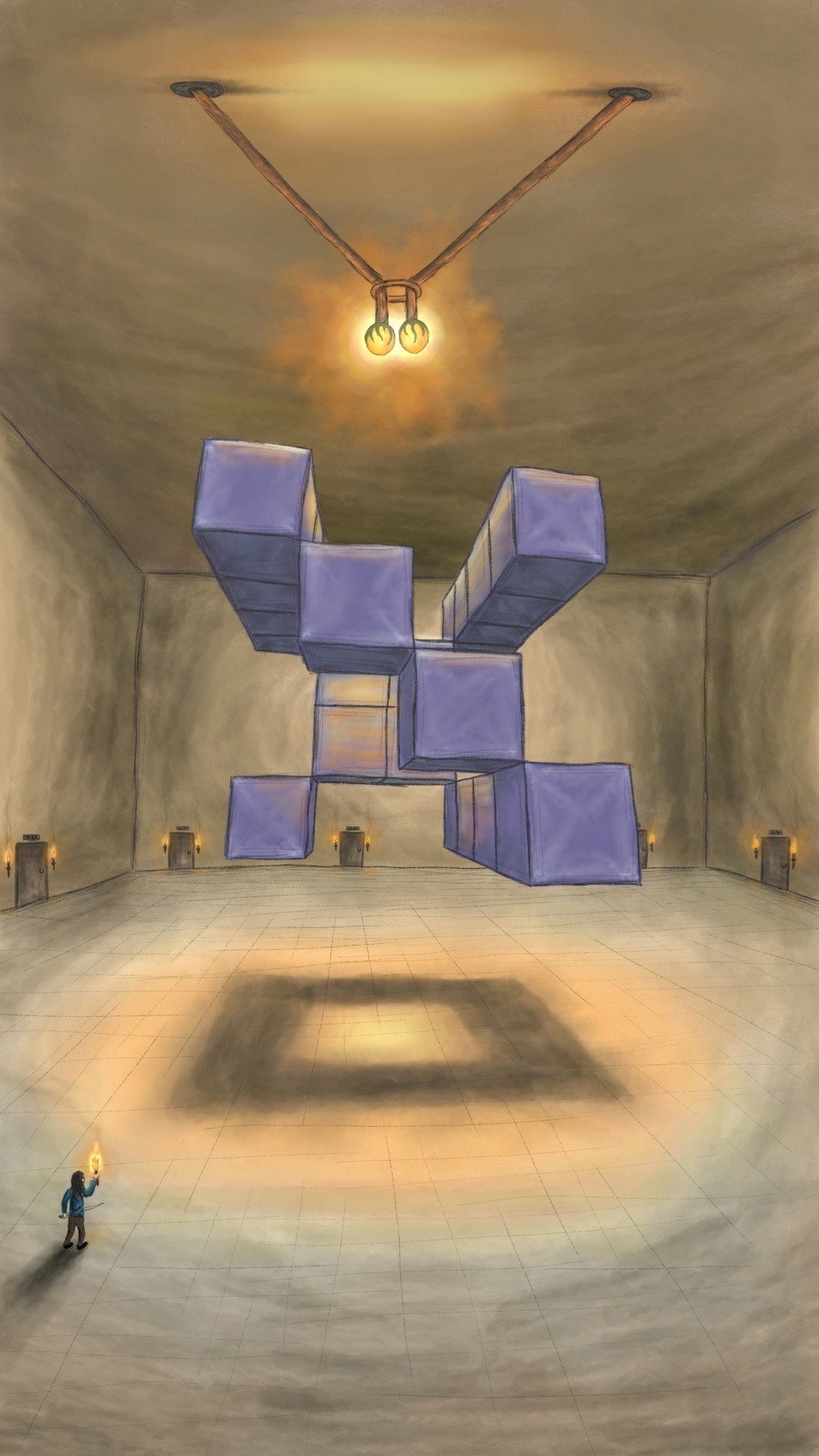 Around the perimeter of the room are thirteen closed doors. They appear to be identical but for the fact that each is labelled with a different word, carved into a small panel above the frame. Your party quickly notes them down:

Knowing that the wrong choice leads to certain death, through which door should your party attempt to exit?

Tearing the lights asunder causes them to swing to positions to the left and right upper sides. With light shining from those angles, the left light produces an image of F while the right light produces a boxy 8. Together, F + 8 = fate

Added info: To get the answer:

OP edit: here's a gif that might help visualise the above explanation:

you will 'hear' the answer - cuing to the sound of 'fate' rather than an exact spelling. nice touch.

Brilliant puzzle - used to love these kinds of tricks in D+D.

The correct door will be found by fitting the four letter words onto the cubes. There are 12 four-square-spaces visible in total - three on each of the three rods that extend towards you, two diagonals on the back wall facing away from you, and one diagonal facing you.

one word that doesn't fit and that will be the exit door.

I haven't had time to work out

which words / letters would fit or how you would know which ones fit where but maybe someone else can improve this answer with that information.

Gaze upon this thing of wonder,

It’s talking about the blocks

'Neath a sky where stars align.

This is talking about those two lights

Then with heavens torn asunder,

Maybe if you rip them off the ceiling

And shine them on the blocks at different angles, it’ll form letters.

The door to go through may be FORT, since it’s the only door with an F and an O; but I can’t really see how to generate the R and the T as of yet.

Assuming the shadows are the key, there are more than one possibility for a shadows If the lights are separated by removing the ring, they will position themselves at the diagonal of the upper left and upper right. This would create a shadow of B and F respectively. By this we have O, B and F. No word has all three of these letters, so what if we eliminate those that do. This leaves EYES, DARK, DICE, LIFE, WAND

Okay, so having taken standardized tests in school, the answer to this puzzle clearly involves being able to visualize something to do with the blocks.
This makes me not like "'hear' the answer", because I'm 100% sure the riddle depends on "seeing" the answer. Like, visuals.The artist in me asks about the shadow on the floor. Yes, it's correct, given the arrangement of that stupendous light fixture, all the rage in evil wizard decor, apparently.
Here's where I get stuck. I've never played D+D, so I don't know if I can move the blocks, the lights, the room, or the doors. Is this like on a need-to-know basis? I'm thinking if I move the blocks they'll point to one of the words somehow in visual form. I'd look at the rotations again but I'll miss my bus.

Not the answer you're looking for? Browse other questions tagged riddle enigmatic-puzzle visual or ask your own question.