Where is Alex P. Barker?

You are a special agent with the FBI and have been given the task of finding the number one most wanted criminal of all time. He's been hiding anywhere and everywhere to evade capture for over a decade. He does however, have an issue with leaving behind clues for his potential captors. You are heavily encouraged NOT to follow any of these leads. Most of the agents that have followed these leads have either wound up dead, or behind a desk because they got in too deep. 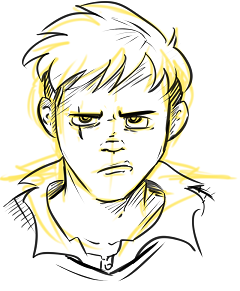 Your first instinct is to head to the place he was last seen. You begin interviewing a few of the locals and can't quite understand what they are saying. You quickly realize that you should have learned the local language prior to beginning your search. Every local you show Alex's picture to says the same thing:

After finding a translator you begin following up on this lead. You quickly arrive at the border and begin interviewing more locals. After a while you encounter a local who gives you a handwritten note:

Wait? Didn't your senior agent tell you not to follow these clues? You little rebel you! As you follow up on the clue, you discover an old shack on the outside of town. It appears as though no one has entered it in years. The locals say it is haunted. You're not scared of ghost though, so you go on in. As you enter the room, you notice that the room is completely empty aside from a pile of papers on the floor and a writing on the wall:

Welcome to the rabbit hole you dingy agent!

You pick up the papers and begin reviewing their content. One after the other, you begin to feel more and more lost. You can't end up stuck behind a desk for the rest of your career! Suddenly the door slams shut and a voice echoes throughout the room:

Solve the papers agent! If you don't you'll die in here! After two days the building will weld itself shut, and even if you solve the papers after this point, you won't be able to get out. But hey, on the bright side; if you do solve them, you'll find me!

Each language has a puzzle of it's own to help you track Alex down.

The Riley riddles will point to either major cities or attractions.

Each riddle when solved in succession will build a path to where Alex is headed.

@El-Guest has already translated everything. Now where is Alex?

This puzzle took a while to create and is quite involved. I hope you all enjoy it, and I wish the best of luck to all of you!

Big shoutout to my friend Google Translate for starting me off with some of these. I know the riddles aren’t perfectly translated, but here goes....

So the first clue says

in Portuguese: “This is the man who stole the bank in town! It should not be taken lightly. He usually has a bodyguard and is heavily armed. A friend of mine claimed that he carries a rocket launcher in the back! Lastly, I heard he was heading northeast.”

From Portugal to Spain; the second clue is a Riley in Spanish.

You drink in the prefix, where water is rare; Usually soft drinks or whiskey found there. The infix where you want me, just delete the last letter; Just give me a partner, make my time there be better. The suffix is one, without the e; just add one and you'll see. Together you will find me, in a rather grandiose place; do not run away from the bulls, just extend your hand.

Thanks to M Oehm for the solution to this part:

In Polish, this translates to I am the truth, yet a lie, erected, but left; known from my tower, made of metal to test.

In Chinese, this translates to You wear the prefix, take out s; as for placing, look at your legs. The infix is gender, which is what you need; figure out that you are really smart. The suffix is closed and built on the lie; be careful with the sweet agent or you will die. The prefix could be pant- or short-

In Italian: Head north, under the North Sea; a reborn country, after bad actions. This might refer to Germany....?

In French: Two, one, nine, eleven, one, twelve. Under the A1Z26 cipher, this keys to BAIKAL.

In German: See Four. (Maybe a repeat of some kind.)

In Korean: I really think how you made it away. You must be a linguist on a bar. This is simple, try not to fall. In this well known country, for an infinite wall. This could be China, because of its Great Wall.

In Russian: Look to the east, for the big tower; The name is in honor of a soul full of strength.

Not the answer you're looking for? Browse other questions tagged riddle lateral-thinking story language geography or ask your own question.

11
Lights in the Dungeon: Hooty and the Message
5
Lead the murderers out
10
A Game Of Cat And Mouse: Part 2
6
What do chess and wordoku have to do with each other? - Clue Thirty-One
4
Mysterious note at the United Nations
9
Where will this take me?
10
Where should you go? The Mysterious Disappearances (Part 1)
5
Murder on the Fairway
5
The Atom Riddles #1