Trapped In A Glass Cube [closed]

You wake up and find yourself trapped in a glass square shaped covering. Luckily, you see soil below, unlike all the other directions. You start digging but find that there is glass at the bottom too. You are trapped in a glass cube. You are given a source of water and food. How will you escape?

summon an apple, break it in half, put the halves together to make a whole, climb through the whole to escape, shout until your voice is hoarse, climb on the hoarse and ride home.

If you wanna add some extra steps, you could plant the apple, grow a tree, punch the tree until your hand is sore, use the sore(saw) to chop the tree in half and then put those halves together to make a whole.

As is, the glass is too strong to break, I need to weaken it.

Put the ice (or pour the cold water) a certain spot on the glass to chill it.

Summoning some boiling water, as hot as I can

I pour the boiling water on the specific location on the glass. Done in quick enough succession, this should cause the glass to break/crack, at least at the spot, making it weak enough to easily break.

Hmm, maybe you could

summon apple (or any other tree-fruit) and plant its seeds, water it with the water you can also summon and wait for it to actually grow until it can't fit in the glass cube anymore. You'd be surprised with the force of nature :)

my mother-in-law's fruitcake. It's hard enough to cut glass.

Unlimited time to live and a constant supply of food and water, I’d simply recommend waiting. Glass takes anywhere from 4000 to 1 million years to decompose; wait out that length of time and then you’ll be free!

Either that, or you could

More jokingly eat and eat and eat until your mass breaks the glass down; but if it’s a big enough cube this won’t work ;p

a cannibal, so I summon a feast of 100 men inside the cube. We use our collective strength to lift/break the cube. To celebrate, I eat them.

Summon a donut, eat the outside and use the hole to exit

Use your voice to match the glass's high-pitched natural resonance tone to produce vibrations strong enough to shatter the glass. Perhaps some high-pitched opera style singing?

wait a million years or so (since you have Unlimited Time to Live) and the glass should decay back into sand eventually.

If puns are allowed (and really, should puns ever be allowed?)

you could try harder and harder until you are going all out. And there you are!

summon a sledgehammer and a screwdriver (2 cocktails) and smash my way out.

Luckily, you see soil below

summon bamboo shoots, and plant them, and they will grow and break the box.

You can only summon food in the glass cube, and not outside

You can summon water outside the glass cube

and so I would summon

Well, one way to get out is

Summon a lot of food in the glass's thickness (I don't know whether this still counts as summoning food inside the glass cube). This will create a hole big enough after removing the food. You can then get out :)

develop Pica, and then gradually call small parts of the glass cube for me to eat. Eventually, a hole will develop in the wall which I can easily walk out of.

Summon a some salt and water, mix. Then summon some potatoes. I would then use the wire in a bra or belt buckle to create electrodes in the potatoes and begin to create NaOH.

Summon tree bark (yes it can be editable) to create a fire. Boil off the remaining water and voila, you have Sodium Hydroxide! Let the dissolving commence!

I really think the Capital Letters mean something, perhaps Give a clue to a cryptogram of sorts. Something to ponder over..

Since the question doesn't say that I am a normal human, I can use my Speedster skills (I am the Flash) to either
1. Vibrate so fast that I can pass through the glass walls in a process called quantum tunneling

2. Travel through time by running faster than light to when I wasn't in the glass box (you said I woke up in the box).

Also, this isn't any magic, it's science.
After I escape, I will summon lots of food and water since I get hungry after using my Speed Force.

make gunpowder with your urine

So the main issue I have with a lot of these ideas is the thought that you can summon a specific type of food and specific temperature of water to escape from the cube. I however believe the answer lies within the body, the only constant inside the cube. Urine and feces can always be produced by the body regardless of the nutrients that enter it. Using a bit of chemistry and ingenuity urine can be made into a rudimentary gunpowder and likely the rocks within the nitrogen rich soil can be used as an ignition source. Given infinite time I don't think this is an unreasonable solution.

Link to a video explaining the process -

define everything on the other side of the glass as being "enclosed by the largest cube in the universe" and thus free myself from being trapped INSIDE the cube.

You've got to wear away the glass somehow; fortunately, you can

summon various acids to weaken this (nice glass of lemon juice, anybody? Maybe some vinegar). You'll need a rubbing cloth to work this against a patch of glass - if you can't use your clothes, just painstakingly weave a cloth from your own hair. Give it a decade or two and you'll surely be out.

Inspiration: the 'unbreakable' prison in the Lightbringer books - wiki

Summon toothpaste and a lemon. Combine the lemon and toothpaste to create small amounts of HF, which should dissolve through the glass walls.

Escape? I challenge this notion. I'm not trapped at all.

I'm fine where I am. What you have given me is a giant hamster ball 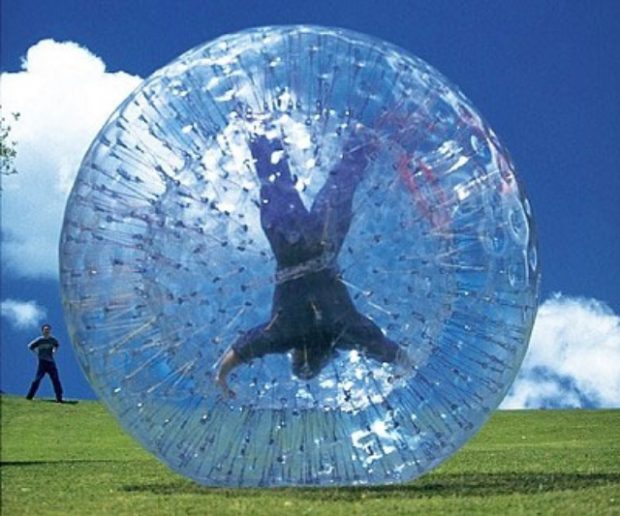 Indeed, people pay money for this! 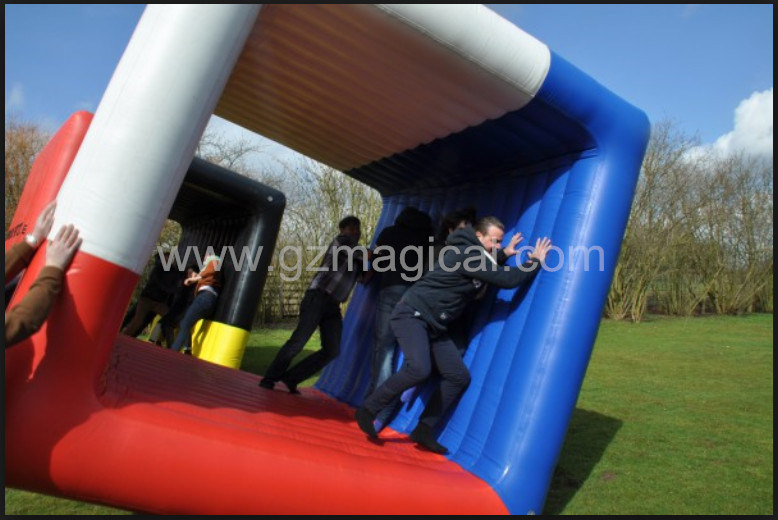 But at some point, I'm going to be asked to actually solve the puzzle.

It says I'm not strong enough to move the cube, but some movements don't call for strength. Mass is enough. And the puzzle never stated the cube's size nor orientation. If I find myself in a large cube that's on edge, rather than lying flat, I could summon a large amount of food in one of the raised edges... say lots of caramel so it sticks to the glass. That mass could rotate the cube until it lands. Large sheets of glass break. You can make them as thick as you like. If that's not good enough, you can always take advantage of momentum. Since I can't build up pressure in the room, there must be a way that unsummons the food when it gets to be too much. Unsummon the food in one corner once you're past 90 degrees, then summon it in the next corner. You can build up an arbitrary amount of speed that way.

That glass is going down, one way or another. But honestly... hamsterball.

I would make some edible which can cause corrosion of the glass and with a branch(from which the chemical is extracted) will break the glass and escape the cube.