Which set of arrows replace the question mark in the image below? 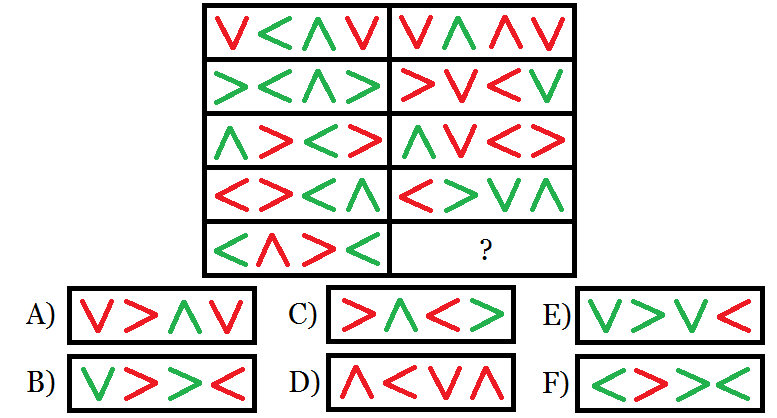 In the first column the inner two arrows change only every other line. The second column is similar except offset by one. This means that the fourth and fifth row should be the same and E is the only option where that is true.

I'd say the answer is

F) is the only pattern with an even number of vertical arrows, an odd number of green ones and that ends with a green one.

P.S. Not a solid reasoning, but the only one I could see at the moment.

Okay, I have an hypothesis

I noticed something thanks to the hint, is that the rule change if the line is odd or even. Let's say that the table is lined from 1 to 5, and columned from a to b. The tuples inside get indices i, j, k, l.
1ai doesn't change in 1bi.
1aj change of orientation in 1bj
1ak change of color in 1bk.
1al doesn't change.

15
Identify the next symbol in the pattern
2
Two IQ test patterns
8
Pattern #2: Xs and Os
4
What is the pattern in the question box?
4
Number sequence. What's next?
11
Picture puzzle… Replace the “?”
6
Picture puzzle.. numbers missing
3
Missing numbers
8
…Let it begin
1
Pattern puzzle 013