The tropical sun was still down, but the Ruritanian marketplace was already bustling with people. Charlotte hurried through the crowd. She was out of fish. Charlotte had been in town for weeks and already knew the place like the back of her hand. She just needed to buy fish and make it to her destination acoss town. The locals were already out selling their stuff. "Looking for a good fish? I'll show you a good fish!" Charlotte was not interested. These were small fish operators, and she had something bigger in mind.

Ever since she had heard of a sighting of the elusive Clupea ruber in the nearby Ruritan river, her mind had been set to seeing this magnificient beast in the wild once in her life. The problem was that they never stay in one place for very long. Fish is money in a market town like this, but she had no interest in selling or even catching it. She just wanted to see it for herself. Finding it was her life for the moment – it was about fish.

Making it to the docks, Charlotte had already broken a sweat. The sun was coming up. She only had so many hours of sunlight, and had to make the most of it. She had her water bottles and food with her. She had some spare fish still. The day's plan was the same as always. Move slowly up the river, inspect fish after fish, and try not to let anything pass her by unchecked. She was sure she'd know the one she was looking for when she saw it. Any fish now could be it. She would not give up until she had that fish stamp in her travel journal.

Problem was, she may have shown up too late. Scanning the river, from fish to fish, might no longer bring her any closer to her metre-long, scarlet-sided target. They may seem lethargic at first glance, basking in the warm surface water, but this fish can actually fly like an arrow when moving from place to place. If she had missed it, there was little chance an opportunity like this would present itself again.

Upon sunset she returned to the docks empty-handed. She stepped off the boat, sat down, buried her head in her hands and sighed deeply. Maybe she had lost her chance. Maybe it had all been for nothing. All the planning, the getting up early, all the long days in the boat, worrying about lost fish... Everything... And suddenly, it started dawning on her. All of this. The boat trips. This adventure. This furious race against fish. She could see it so clearly now.

She had had the fish of her life all along.

What was the fish?

The fish in this story seems to be referring to

I came to this conclusion because you can replace every use of the word fish in the story.

She was out of fish

She was out of time

In the end she realizes that, while she never found the fish, she was still having the "fish" of her life.

I don't think this is the solution, but probably is a good clue:

the fish is a scarlet (red)-sided Clupea (herring)

Is it a pun? Because it seems she lived a life

filled with porpoise
(I know it's not a fish, but does the OP?)

I may get burnt with this one, if her fish is not the:

Char which Charlotte had all the time.

I hope have haven't got caught by a blooming crimson Clupea

They may bask but if caught are a fast moving sport fish, often have pink/red spots over a darker body and may grow to a size over 1 metre. 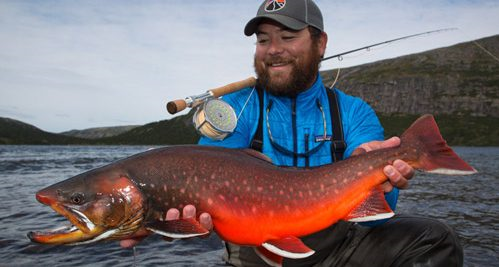 just a fish. Not everything has to be an enigma wrapped in a mystery.

The reflection of the sunrise/sunset on the water.

1. "The tropical sun was still down" implies it was before sunrise

2. "She just wanted to see it for herself." implies it's an experience

3. "Making it to the docks, Charlotte had already broken a sweat. The sun
was coming up ... Problem was, she may have shown up too late." - she
missed the sunrise.

4. A "fish stamp in her journal" could be a travel log type thing - i.e.,
to see the sunrise at the XYZ docks.
5. "They may seem lethargic at first glance, basking in the warm surface
water, but this fish can actually fly like an arrow when moving from
place to place." - The reflection may seem to appear slowly at first (on
top of the water) due to the changing color of the sky, but as the sun is
exposed, it would shoot across the water very quickly (in a sunrise).

6. "Upon sunset she returned to the docks ... And suddenly, it started
dawning on her ... She could see it so clearly now." - she caught the
sunset at the right time.