We call him Evil Blue

I have just started a new job at the M/M factory (with a slight modification to avoid copyright). As part of the assembly line, the job isn't difficult. Your eyes have time to wander as the motions become second nature. I noticed the continuous absence of a very striking coworker. Why striking, you say? Not only did his man appear one day, and disappear the next, but his hair was a vibrant shade of teal-blue and paired with quite an unsettling face. During lunch break, I asked the guy (named Henry) who works next to this mysterious worker about the disappearances.

Henry replied, "Oh, him? He's an interesting one, isn't he. They can't fire him since he's such a rarity. I know health-wise he's quite brittle and visits the clinic once every fortnight about his right ankle. He's told me about it before; we seem to get along well. He hates Koby though. Says he's different. Kind of harsh if you ask me... I'm pretty sure they're cousins or something. Anyway, us guys call him Evil Blue cause of his face... but in a good way, though!" Henry awkwardly goes back to eating, ignoring my puppy dog eyes for more information (guess he let that one slip). I gave up and finished my lunch as well.

At the end of the day, I realized that I never got the most important piece of information: the rarity's name! A nickname won't cut it- there's no way I could go up to him and say, "Hey! Evil Blue! What's up?"

This puzzle's been around a long time, but I've just sussed that the answer sought here is that Evil Blue's true identity is:

There are lots of pointers towards this placed throughout the text of the puzzle...

Not only did his man appear one day, and disappear the next...

This may be referring either to the mineral's rarity or in some more oblique way to its anisotropic nature, (i.e. it has different properties in different directions) or the fact that it is biaxial negative, containing two optic axes.

...but his hair was a vibrant shade of teal-blue and paired with quite an unsettling face

Devilline is coloured teal-blue, and its appearance in the image on its Wikipedia page (below) certainly bears a certain resemblance to hair: 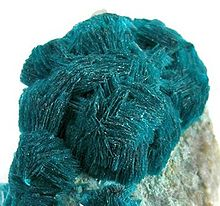 From other images found at mindat.org you can see that its appearance is certainly very striking:

During lunch break, I asked the guy (named Henry) who works next to this mysterious worker about the disappearances.

This person called 'Henry' who knows so much about devilline is a reference to the French chemist Henri Étienne Sainte-Claire Deville, after whom devilline takes its name.

Devilline is a rare and unusual secondary mineral found in the oxidised portions of copper sulphide ore deposits. (Source: Wikipedia)

I know health-wise he's quite brittle...

Devilline is brittle, scoring a lowly 2.5 on the Mohs hardness scale.

...we seem to get along well. He hates Koby though. Says he's different. Kind of harsh if you ask me... I'm pretty sure they're cousins or something.

The character Henry has an affinity with him for the reasons pointed out above concerning the etymology of devilline's name. 'Koby' here is a reference to Kobyashevite, a related (but different) member of the devilline group of minerals.

Anyway, us guys call him Evil Blue cause of his face...

The 'face' referred to here is the first part of its name: DEVILline, a word synonymous with 'evil'!

(It's also worth noting here that the setting for this puzzle is on a factory production line, in a nod to the last part of its name: devilLINE...)

This answer also satisfies two additional hints dropped by the OP in comments on @1848's answer:

1. You are totally correct to guess a mineral - devilline is a mineral.

I used to think it was Amazonite (gemstone) but another (maybe better?) answer for the name could be

it's compounds are used to make blue pigments, it's name comes from 'kobold' which is an evil creature, and it's apparently brittle and rare. Also, 'Koby' kind of sounds like 'Cobalt', so maybe it's Cobalt's hated cousin.

Not the answer you're looking for? Browse other questions tagged word wordplay knowledge or ask your own question.

11
Our puzzling friend
3
God never met him
4
What do you call exactly one kilogram of crows?
11
Birdies and Tigers and Bears, Oh My!
15
Word in a phone call
33
I shouldn't have asked him
9
You either love him or hate him
3
Eon Blue Apocolypse
25
Where will this killer strike next?
6
Call Me at This Number