What is the largest N by N square chessboard where it's possible to construct a position such that 2 knights and N pawns either occupy or threaten every square?

5x5 solution which seems to be optimal. 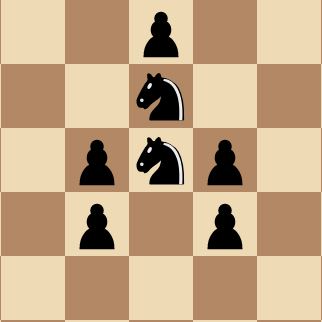 It is impossible to have

So with simple calculation we can conclude that

$18+7\times3=39$ squares is maximum number of thread + pieces and it is smaller than $49$. So even though theoretically 6x6 is possible, there is no such case exists.

6x6 is impossible too.

With the previous calculation, we can find that

with 2 knights and 6 pawns, the maximum occupation and thread will be $36$, which is the same as the available empty squares. So there should not be any conflict square whatsoever.

there are only a few squares where you can put two knights to thread and occupy 18 squares and only combination where they thread distinct squares is only possible when they are positioned in the middle and next to each other. Other combination would not cover 18 squares (except symmetries). 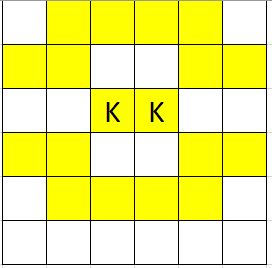 As you see in the image above,

You cannot put your pawns where they occupy and thread 3 squares wherever you put them. Actually u need much more than 6 pawns.

21
The separation of chess pieces
3
Can more than 24 knights of each color be placed on a chessboard without any pieces attacking opposite color?
22
Desegregate the Knights
27
Two Knights, two Bishops, two Rooks and two Kings on a 4x4 chessboard
6
Oddy Chessboard
5
Build Me A Pawn Wall!
5
Something Large From Something Small
3
All The King's Men-Selfmate In 14 Moves?
6
Freedom of many choices