20-Questions on a grid

Posted this on /r/puzzles too, none have given the right strategy as of now :)

There is a square grid of width and height $m$. Three facts about the grid:

You have to find some value v in the grid, (or see if it exists in the grid or not). What you can do: Ask an oracle for the value in a particular cell. But you can only ask a maximum of $4\times m$ questions to the oracle. What's your strategy?

For an easier version, try to solve it with around $m. \log(m)$ questions.

You may try to find the value independently for each row (or column). What you have to do is to use Binary Search Algorithm -- like to find a word in a dictionary -- on each row.

Edit: There's a flaw in the answer below as pointed out in the comments, I will leave this here because some ideas might help other people (then again, maybe I'm on the wrong way)

I think the following strategy works, might be slightly off with roundings, but would probably be ok for m a power of 2:

First, query all the elements on both diagonals. This takes $2m$ queries, and is the fastest way to determine all the ordering in each row/column.
This restricts the value you're looking for in at most one of the 4 triangular quadrants defined by the 2 diagonals: up/left/right/bottom.
You're left with $2m$ queries and have to search in a triangle of basis $m-2$, and height $(m-2)/2$.
Then, we finish by an easy induction / binary search. We can cut the triangle in half with $(m-2)/2$, and have a rectangle triangle that you can cut with only $(m-2)/4$ queries. Then you're left with a triangle that is identical, but $4$ times smaller than the previous one, and repeat.
The cost in query of this induction is thus $\sum_i (m-2)/2^i$, which is less than $2m$

I show a solution for

the restriction for the columns wasn't even utilised, and that the strategy wasn't really adaptive: which values to ask from the oracle wasn't depending on the previous answer for the first $2\times m$ cells at all. I have the intuition, that in a typical case the monotonity criteria coming from the columns gives another factor of $\frac12$ on the size of the groups, so $m\le10$ can be solved. 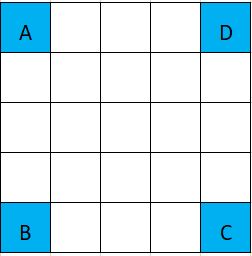 The first numbers you need to ask for, because you would know the biggest and the smallest value in the grid. Even cells are easier in my option.

other corner values in the inner square 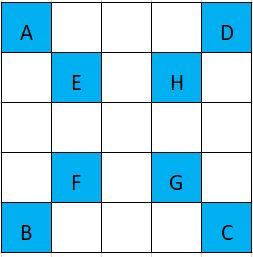 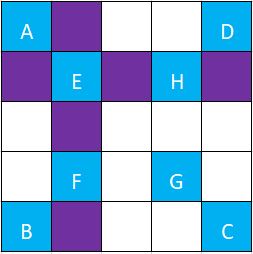 So for example, one of the worst case is 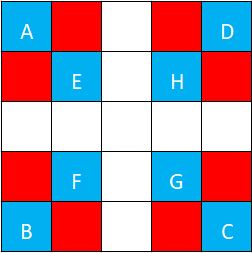 Note that the red cells are the cells where our number cannot be there.

So only asking 4 more cells shown below, will eliminate another 4 cells with

the same logic above, asking for I,K,L,J will guarantee that 2 white cells left: 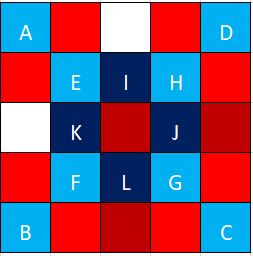 in total for 5x5, 15 cell asking guarantee to find or not your number exists. This is optimal solution for 5x5! Even if you asked for every white cells left, it would be sufficient for $4m$,

In general, you can eliminate

so you asked for

so we asked for 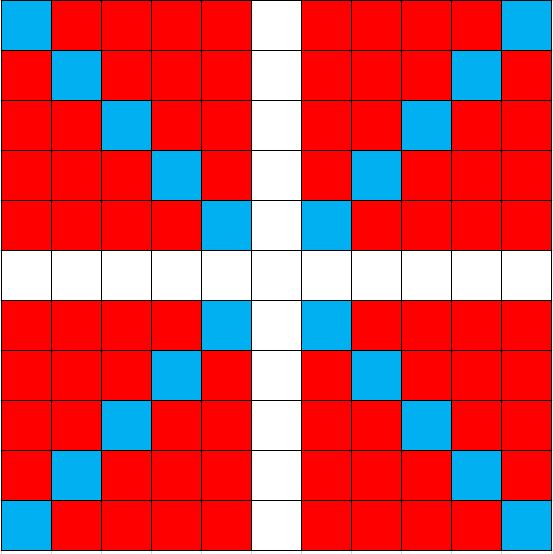 And for the rest of while cells,

Not the answer you're looking for? Browse other questions tagged mathematics algorithm or ask your own question.