Number of Students in the class?

Each student writes down his/her name, surname, age and birthplace on a card in a class. After that, these cards (each containing four entries) are collected and examined. The following observations are made:

What is the possible maximum number of students in the class?

Any two cards selected from this set will have an identical entry.

Proof that this is the maximum.

If we make 4 groups of 3 students (12 in total), with each group having one entry in common, we can choose one student/card from each group. So that is not working.

But luckily we can decide that in one group of students (e.g. the group with same names), each of the three students has another entry common with another group of students (e.g. one student in the 'same names' group has the same surname as people in the 'same surnames' group, and so on), we can't choose 4 students without two of them saving a common entry. Unfortunately now we have too much students in 3 of the groups, so we have to remove 3 students, leaving we with 9 students in the class.

Here is a diagram 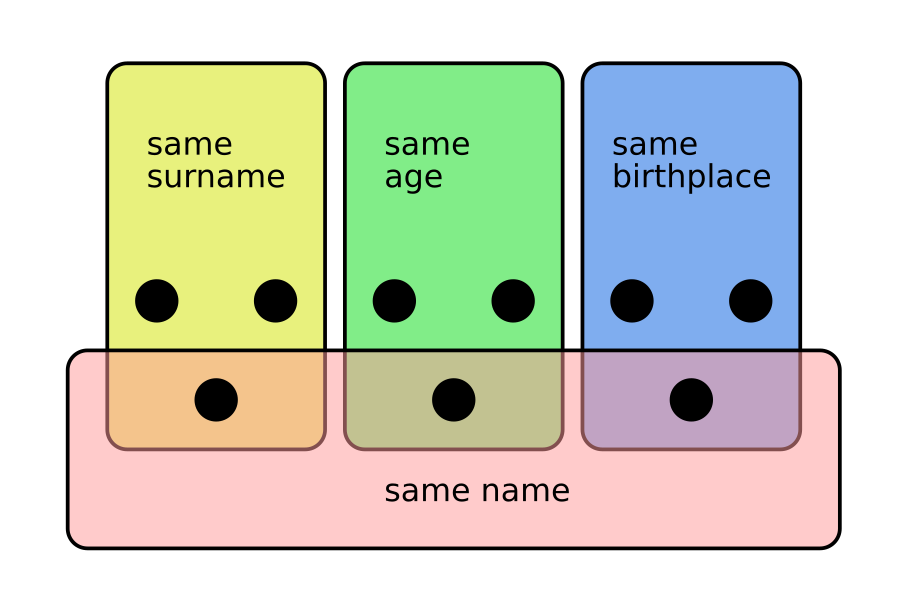 I think there must be a better way of explaining this and actually proving that this is the largest number of students, but this is how I can make it sound reasonable.

10
Students in a class with the same name
1
Choosing a leader from 3 groups of students
9
solving a logic grid puzzle
44
Haters gonna hate
14
How many questions in the exam?
12
What a weird final exam