Charlie was at school- middle school, to be exact. He had begun to chat with others his age, and was starting to make some friends. In particular, he had found a female friend, which made him very happy. She was Chinese and was learning English as her second language, but that didn't stop him from hanging out with her. They had finally gotten to the level of eating lunch together, and Charlie had made sure to get a good lunch that day. They sat down and started to eat.
At some point, the girl had taken a look at what Charlie brought for lunch, and asked him if she could have part of the main course. This was Charlie's favorite part of his meal, and he refused- besides, he'd already bitten all sides of it! There was nothing sanitary enough to give her. He was also still in middle school, the age group where sharing is not caring.
She pouted and said something to him that he couldn't understand, which bothered him. He asked her to repeat it, but she refused to say it again, instead scribbling some pictures on a napkin and handing it to him. She didn't ask to try anything else, and Charlie decided he'd make amends with her some other time.

Here are the scribbles that the girl made. Can you help Charlie figure out what she had told him? 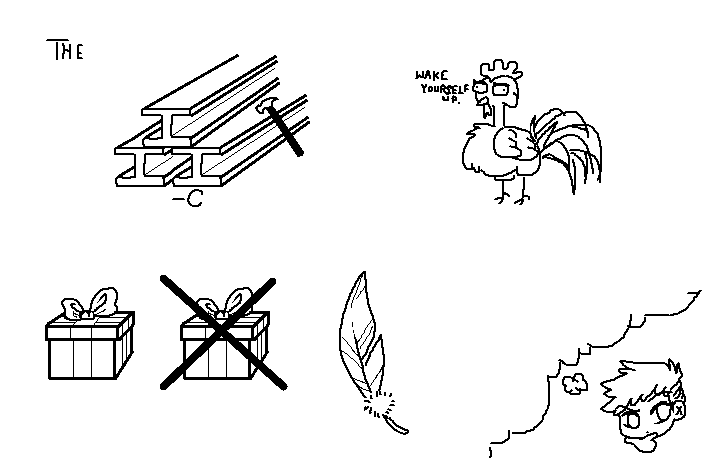 Author's Notes: No, what the animal is saying doesn't have much to do with the puzzle- it's just there to help you identify what the creature is. Similarly, Charlie and his thought bubble are for flavor.
Hopefully the story isn't too cringe... we all went through that phase in life, and I decided some story is better than no story. On that note: there is only one piece of information that is helpful from the text, and if you are not a part of it, the Knowledge tag is for you!

I think it is something around

The iron rooster won't gift you even a feather

It comes from a Chinese expression

In China the term iron rooster is used to refer to a very stingy person. Also found the origin story here.