What is the hidden phrase for this bottle cap?

I've recently come across some Lions Head Brewery beer, and under each of the bottle caps is a visual word puzzle. Using the pictures and characters on the cap, it creates some sort of phrase. For example, I had one that showed the letter "E", followed by a dog that had the words "Grr" next to it (indicating that the dog was growling), and then a picture of a bumble bee, followed by the letter "R". The phrase for that one was "Eager Beaver," which was quite easy to get. However, I'm stumped on this one: 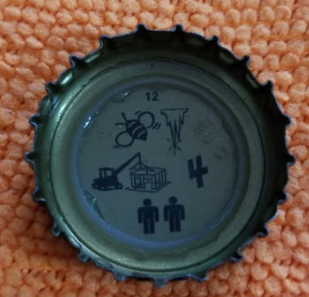 So far, I've come up with "Be _ _ for two" where the bumble bee indicates "be" again, the number 4 translates to "for", and the picture of the two people indicates "two." What I can't figure out is what the stalactite like image means, and what the construction vehicle that is building what looks like a house means. I am also not sure if my assumption about the two people is correct. One thing to notice is the stalactite like image has some lines come off the one point, which may mean "pointy" or "sharp" but I couldn't see how those words would fit into this puzzle. Also note that the number 12 at the top is not apart of the puzzle.

What is the hidden phrase for this bottle cap?

which is the final line of the song