The following is a "Laser Maze."

The goal is to place the tools into the maze so that when the power is turned up to maximum:

Contrary to popular belief, the beams may cross; they will pass each other without interference or direction change (the splitter will have moved them onto separate planes).

Here are the tools along with their allowed rotations and allotted quantities:

As (faintly) indicated, each tool occupies one square.
All (16) tools must be used.

The tools react to the Laser Beam as follows...

...and hitting the wooden blocks is bad. 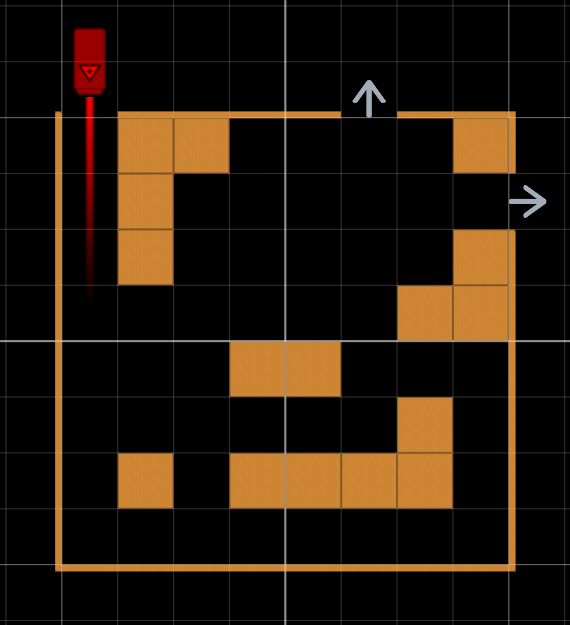 *The laser is currently set to low power, and only penetrates a few squares.

Here's my go at this "laze". To make the paths easier to distinguish, I used a beam splitter that changes the colour of one of the beams. 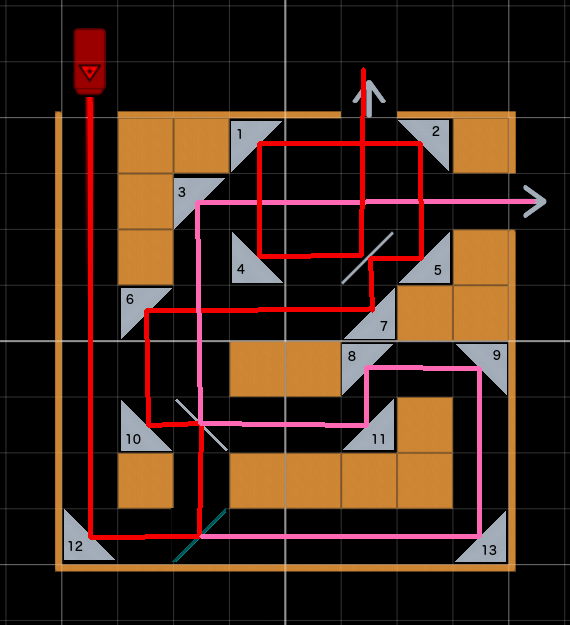 (Image was edited to remove the ugliness mentioned in the comments.)

My approach was to plonk down the unavoidable bits:

* each corner must have a corner mirror, so mirrors 1,2,3,5,9,11,12 and 13 are automatic.
* 8 needs a mirror, and it cannot be in any other orientation without creating a dead end. This also forces 7.
* The beam splitter's square has a three-way intersection, where any other piece would create a dead end, and if the square were empty, the square above it would be impossible to visit without hitting a wall

With all these in place, I just put everything else (mirrors 4,6 and 10, and the two-way mirrors) in where they seemed to be useful, and happened to hit a working solution with the correct number of pieces by chance.

On the (non-)uniqueness of the solution

Notice that the lower double-sided mirror is actually a no-op: without it, the beams would just switch roles, and everything would still work out exactly the same.

Since the mirror isn't needed there, it can be removed and placed anywhere where two different beams cross, as long as it is rotated so that the incoming beams hit opposite sides of the mirror. It won't have any effect in any of those places, either:

The upper two-sided mirror isn't fixed either, at least these positions work too:

Not the answer you're looking for? Browse other questions tagged visual geometry mazes mechanical-puzzles or ask your own question.

19
Cube made of 2x2x1 blocks which blocks all light
42
The Persistence Of Memory
11
Ernie and the Disco Unicorn
54
The Ludicrous Loop: over a thousand cells of circular logic!
5
Horror Episode #1: Shapely Shedding Light
10
Imma Reflectin Mah Lazer!
11
Three-dimensional light bulbs
15
Four-dimensional light bulbs
4
The revenge of 3D light bulbs
7
Four color a map - but go light on the fourth color!