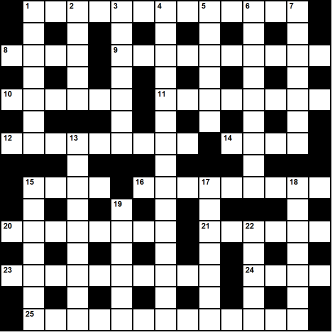 Across
1 Changing climate? Ban car transport (8,5)
8 As Aladdin rubs his lamp, the contents turn to fire (4)
9 CBBC hit is a calculated insult to woman of conventional tastes (5,5)
10 "Hello, sadness" with internal expression of resignation (2,4)
11 Moving, for old woman confined to bed, is a wrench (8)
12 Separatist beer-drinking rifle association lady ignoring odds (9)
14 Ultimate goal: a success at finals (4)
15 Not strong on amusement parks - throws up (4)
16 Pillowcases and sheets for men Spooner is executing (9)
20 Chase, and sow chaos into demonstration (8)
21 Prison riots make one mad (6)
23 Break-in is from raging infernos (10)
24 Suggestion from bride and groom (4)
25 Perhaps Egyptian I'd led astray with high teas will stop me joining navy (6,7)

Down
1 Makeup would be more vibrant without foundation from Boots (7)
2 Rigged ocean vessel (5)
3 Buller is ravaged by a disease (7)
4 Get-together with a measure of deviation surpassed by bachelors (9,6)
5 Regarding Chanel's first rust-proof coat (6)
6 German woman and German man described first type of crime (4,5)
7 Leave work, head off strike by management (7)
13 Point to Archers cast who are regularly barred (9)
15 Dawkins' profession upset his mate (7)
17 Reveals Canadian team recruiting wingers from Singapore (7)
18 Enthusiastic to the end, granny gets fabric (7)
19 Lady Gaga caught going in with fingers (6)
22 Is the centre of Raetihi coming up? You could ask here (1-4)

A good puzzle with a variety of devices. I found it tough and perhaps not as straightforward as the author claims. It took me two sessions to solve the puzzle.

There are several occasions where words have to be separated and where hyphenated words are treated as if the hyphen weren't there. There's also more repositioning, i.e. changing the order of wordplay parts, than usual. That's by no means unfair, though, and once you start looking for these devices, the puzzle yields steadily.

(Below, definitions are in hold. Not all positional indicators are explained, but should be clear.)

9 CBBC hit is a calculated insult to woman of conventional tastes (5,5)
BASIC BITCH — anagram ("calculated") of CBBC HIT IS A

7 Leave work, head off strike by management (7)
LOCKOUT — (c)LOCK OUT ("leave work" without its head)