This is an entry into the 36th Fortnightly Topic Challenge: "Twisted Classics".

Each clue/answer pair in this puzzle has been affected by one of these types of plot twist:

Once you've puzzled out all the clues' plot twists, use the extra pairs to locate specific cells in the grid, and shade those cells. The pattern of shaded cells will be another "plot twist" in a very different form; the location where it comes from is "piece 1".

Next, follow steps 1 through 4, and you will add another "twist" to this puzzle. Three words will be revealed: when the object they describe is written out fully, it is "piece 2". 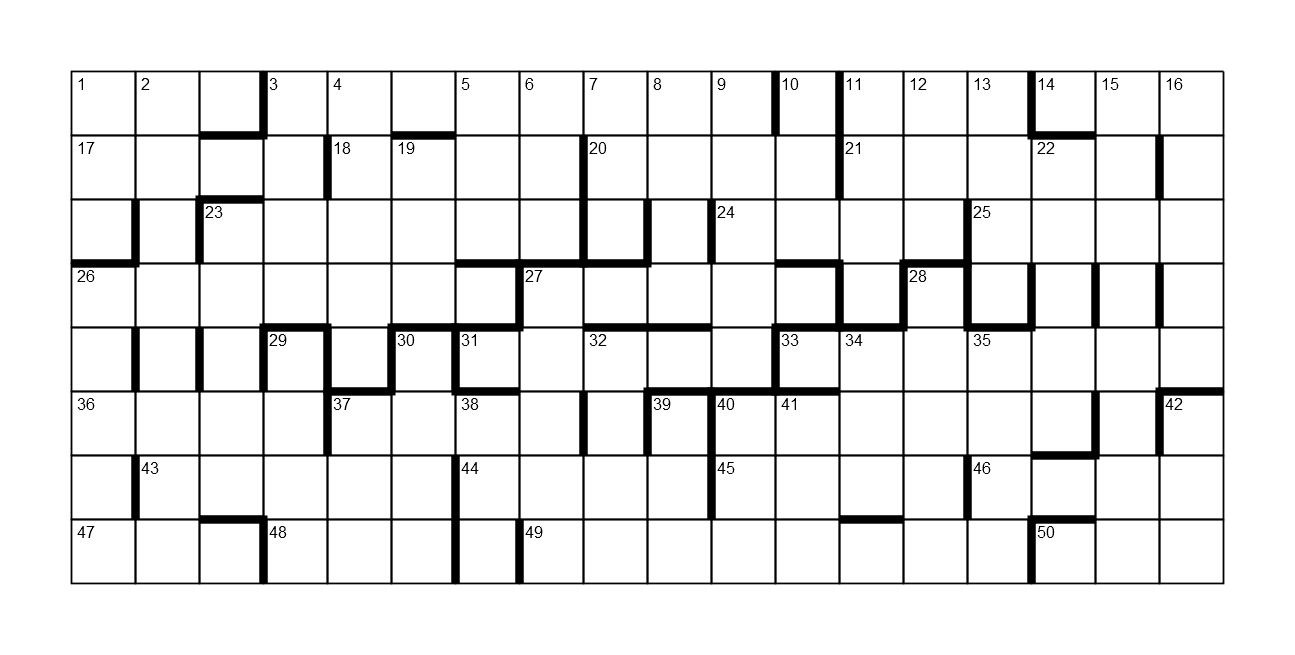 ACROSS
1: Metallic element created by Zulu rival of Forbes
3: Medieval weapon made by a male cat and a bird of prey
11: Patch of ground's place for a pan
14: Courageous trap for cure
17: Seaweed now having edge
18: Brazilian state's cooler judges
20: Speaker from Apple device stolen by sextet
21: Nimble alumni hide soldier in brown beverage
23: Again, starts up vortices with aliens
24: Klansman obsessed with fragments of Twin Towers
25: Alternative to stereo, just in Missouri
26: Uninspiring elements of master ski lessons
27: Loop consideration from Hulk director cut short
31: Sound of Dixieland's seductiveness: first sign of evil
33: Stumbles around, having time for those putting on a show
36: With TeX, adjust spacing and remove "e" to get "seagull"
37: Cries for "eternal spirit" deception, less politely
40: Brief images before stream similar to works with Mary cradling Jesus
43: Elk wanders with herds, losing leader
44: Body-bending exercise with interminable lag just after greeting
45: Spots of actinium put next to empty neckerchief and yarmulke
46: Brief facts of lower bound with no origin
47: Released a pleasant smell to the audience
48: Crosses having soap ingredient? Absolutely!
49: Emetic made from trimmings of nutmeg, zinnia, ulmus, and epigaea, with collection of 27 books
50: Match that's automatically now, near early evening

DOWN
1: Essentially, Captain Underpants is one from Karafuto
2: From Yukon: also, not then having era (or so I hear)
3: Graphics package with a couple of errors is a piece of cake
4: At first, one very grand area seemingly is a place of refuge
5: Picture of trams not having front two pieces
6: That man's honeycomb she lost
7: Burnt remains of Christmas near hospital
8: More recently, authors of Q form a faction
9: Crustaceans' thousand arms and two left feet
10: Collector of dust returned deer
11: Fight, when energy becomes heart, turns into a pool of liquid
12: For instance, interrupting unknown person's big head
13: Makes less distinct avocado and Chinese food without hesitation
15: Modernize, fixing up "fey ring" decal with time
16: Gives wrecked car a pull again, after an accident with smashed towers
19: Cartoonist or animator's animal found in accelerator
22: Solve anagram: "laxest" and "exalts"
23: Now aged, walked over footpath again without end
26: Composer's wear, when a farthing becomes a shilling
27: Burning of boat with us aboard
28: Even after admitting extra weight, chowed down
29: Be jealous of technique with dash (pieces towards the back) of ivy
30: Dispose of loops being used as recaps for author Eliot
32: Disastrous gala for sea urchin plant
34: Elvish script missing final two characters leaves just under a dozen
35: Psychologically manipulated pace
37: Perceive reverse-engineered strap
38: Utah college with high class renowned in the UK (abbr.)
39: Partially knew jaunty odor from France
40: Quiet, pale fathers
41: Cooler for breakfast beverage
42: Nepal's money sounds like something that might go with a buck

(Solution by Gareth McCaughan, Volatility and possibly some anonymous others; thanks to Volatility for making a spreadsheet in which we could collaborate. In the end I think I did most of it, which is why I'm posting this, but by no means all. Go and find some answers written by Volatility and upvote them if you like this one.)

(I'm not going to bother with spoiler markup. This is far enough down the page that if you don't want to be spoiled you can just not read it.)

Red herring clues are described clearly and explicitly in the rubric: the wordplay leads not to the defined answer but to that plus two adjacent extra letters. The version with extra letters is not usually a word.

False protagonist clues, of which there turn out to be four, need their first letter removing before entry (kinda). More about those later.

Reversal of fortune clues contain one word that needs to be reversed (always yielding a new word) before solving the clue.

Unreliable narrator clues are as described in the rubric: one word in the clue needs to be removed before solving.

The clues and their solutions

Down
1: P Essentially, Captain Underpants is one from Karafuto [A]INU
2: R From Yukon: also, not then having [era<] (or so I hear) NORTHERN
3: H Graphics package with a couple of errors is a piece of cake TI[KZ]ER
4: H At first, one very grand area seemingly is a place of refuge O[VG]ASIS
5: R Picture of [trams<] not having front two pieces ART
6: U That man's [honeycomb] she lost HES
7: H Burnt remains of Christmas near hospital [XM]ASH
8: H More recently, authors of Q form a faction W[UM]ING
9: H Crustaceans' thousand arms and two left feet KRI[GS]LL
10: R Collector of dust returned [deer<] BIN
11: H Fight, when energy becomes heart, turns into a pool of liquid BAT[TL]H
12: H For instance, interrupting unknown person's big head [WH]EGO
13: U Makes less distinct [avocado] and Chinese food without hesitation DIMS
15: R Modernize, fixing up "fey ring" [decal<] with time GENTRIFY
16: P Gives wrecked car a pull again, after an accident with smashed towers [R]ETOWS
19: R Cartoonist or animator's [animal<] found in accelerator CEL
22: U Solve anagram: ["laxest"] and "exalts" LOVES
23: U Now aged, walked over [footpath] again without end RETRO
26: H Composer's wear, when a farthing becomes a shilling SATI[GU]E
27: H Burning of boat with us aboard AR[KU]SON
28: H Even after admitting extra weight, chowed down E[VF]ATEN
29: U Be jealous of [technique] with dash (pieces towards the back) of ivy ENVY
30: R Dispose of loops being used as [recaps<] for author Eliot TOSS
32: U Disastrous gala for sea [urchin] plant ALGA
34: H Elvish script missing final two characters leaves just under a dozen TEN[GW]
35: H Psychologically manipulated pace GA[SL]IT
37: R Perceive reverse-engineered [strap<] SEE
38: U Utah college with high class [renowned] in the UK (abbr.) BYU
39: H Partially knew jaunty odor from France [WJ]EAU
40: H Quiet, pale fathers PAS[HY]
41: H Cooler for breakfast beverage [JU]ICE
42: U [Nepal's] money sounds like something that might go with a buck DOE

We begin here rather than with the red herrings because the false protagonists need to be put in their proper places first. The false-protagonist clues are the across clues at top and bottom left, and the down clues at left and right top. Their first letters need to be written outside the grid, and now we see the top of the grid with labels A at left and R at right, and the left side with labels Z at top and S at bottom. And the number of spaces in between is just right to fill in B..Q at the top and Y..T on the left, so that the whole alphabet is used to label the rows and columns of the grid.

Recall that the rubric indicates that the order of the letter pairs in these doesn't matter (which is just as well, because for STAGERS it could be either way). And notice that each letter pair contains one letter in the range A..R and one in the range S..Z. Treat these as coordinates, using the row and column labels we just applied, and shade in the resulting cells. This would be a good point to display the resulting grid:

Unless one is so benighted an ignoramus as not to be fluent in Chinese [note: your present author is a benighted ignoramus], it is obvious that the shaded cells form the (simplified) Chinese character 拧 one of whose meanings is ... twist. (As Deusovi has pointed out in TSL chat, this means that what we have just done is to "plot twist". Nice title drop.) OK then. We'll return to these shaded cells later.

Oh, and of course "piece 1" is CHINA. We'll return to that later, too.

Translating the letters Z,S,A,R into numbers in the obvious A1Z26 fashion and counting from the ends of the clues involved (and, of course, noting that when the rubric says "left to right" it means left to right after that counting; some of the clues are not very long) yields our first instruction: CUT ME OUT.

So we should take that grid and cut around its edges to get an 18x8 rectangle.

Step 2: The reversals of fortune

Counting as the rubric instructs yields our second instruction: FOLD BACK CENTER. So "mountain-fold" along the horizontal line that divides the grid into two equal parts. Our centerfold model is now an 18x4 rectangle with letters on both front and back.

Steps 3 and 4: The unreliable narrators

The first letters of the spurious words say MAKE HALF TURN. The last letters say LINK BOTH ENDS. So, as the discerning reader may have been suspecting for a while, with a suitably placed twist we now make our grid into a Möbius strip.

This allows new words to be created where the ends are attached. The rubric says that we should find three; in fact there are at least four. But YESTER is altogether too 23d a word for our tastes, so let's 30d it. There still remain LETTER, TWENTY and FOUR.

So piece 2 is X. In fact it turns out that it's better to make it EX.

Column "G" has all its cells shaded. They say, if we are sufficiently broad-minded to let them, ARTED BY U. Yup, we sure arted pretty good.

What is the proper order to read all the cells in? Well, since this puzzle is only for those fluent in Chinese, the obvious thing [note: I had no idea until Volatility suggested it] is to read them in the One True Stroke Order that your bamboo-and-tiger-hair brush traverses when writing the character formed by the cells. This plainly [note: I had no idea until Volatility told me] ends up saying CREATED BY US TAKING IN THE PIECES. I have to confess that I don't think I would say those words in order to describe the puzzle after steps 1-4; so much the worse for me.

"Created by us" -> MADEUS, obviously. The pieces are CHINAEX, as previously explained. The one takes in the other to yield MACHINA EX DEUS. Ex Deusovi, that is. And we're done.

Hats off to Deusovi: that was a pretty densely packed puzzle! It was fun to solve, though for some shorter answers the red-herring mechanism made it difficult to be confident of having found the right solution.

Thanks to Deusovi for pointing out (in TSL chat) how I was failing to understand 20a. I have made an appropriate minor correction above.

Not the answer you're looking for? Browse other questions tagged wordplay cryptic-crosswords or ask your own question.