Create a map of a game's portals

Given a set of rooms, each with a N, a S, an E, and a W exit/entrance to another of the rooms, create as simple a map as possible that graphically represents their connections.

The rooms in question are the level 3 rooms of the Watcher's Keep from the Baldur's Gate 2 Throne of Bhaal game. There is no need to play or search much; the rooms and their connections are neatly described here, where each room is represented by its ingame code = AR<4-digits unique room identifier>.

My intuition tels me this is not a plane graph, thus multiple levels should be used. I have constructed a solution atm which has all but one room located in the "0 level" in multiple rotations, and one room in the second level upside-down (antigravity?). The simpler the final design the better.

Please tell me if this needs any modification!

That took a little bit to build. Unless otherwise noted all paths are bidirectional. The indicate the rotation needed to get back to the original orientation. Positive being clockwise, negative being counter-clockwise.

For example, AR3009 needs to be rotated clockwise 90 degrees to get back to the image in the OP's link. 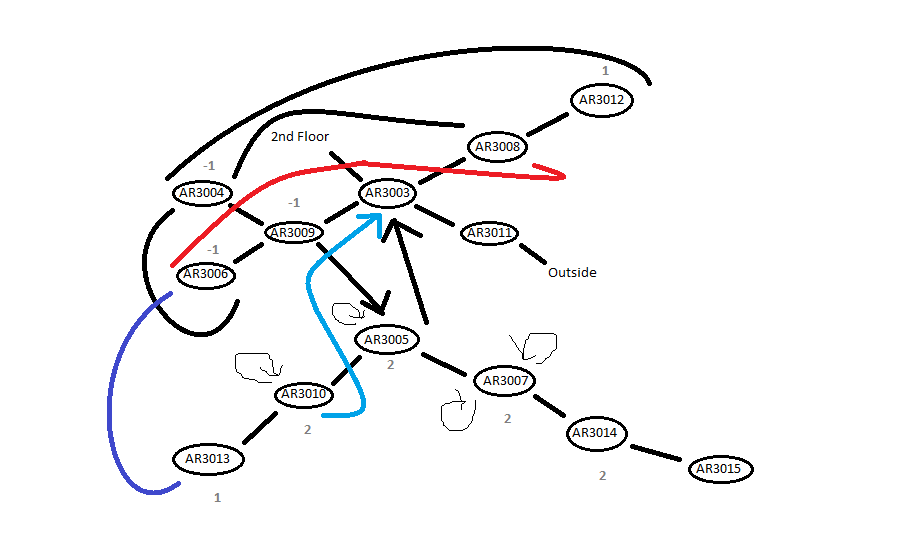 Not the answer you're looking for? Browse other questions tagged geometry graph-theory or ask your own question.

8
Drawing lines on a map
2
Create a special Playing Schedule - Logical/Mathematical Solution
10
Create bridges to minimise distance
11
Ernie and the Thrones of the Aqua-ant
8
A perfect metro map
33
Create a 3 inch measurement
8
Color this map using only 4 colors (easy)
10
Create a 1 meter measure
8
9x9 Map Path: In and out next to each other?