My neighbor is convinced that he is going to die. (Decode)

So I live in a pretty crazy neighborhood, whoever designed it was pretty particular. All the houses are square, and arranged in a perfect grid, also the designer must have been rich because this neighborhood is massive - my one friend, Horton, says that it is infinite.. but I don't know about that.

Anyway, my crazy neighbor John has been holed up in his house tracking all the people moving in and out of the neighborhood, and he swears there is something 'bigger' going on here. He's always been a bit of a conspiracy nut, but he's got dozens and dozens of maps of our neighborhood all covered in strange markings. Some of the maps go back years! He claims something crazy is happening soon, after he, presumably, dies.

Can you help me? Is my neighbor going to die? What's happening soon? And who designed this neighborhood!??

I've included a map of the neighborhood. I've shown what houses are currently occupied, and I've marked where John lives in red. I'm really at a loss! 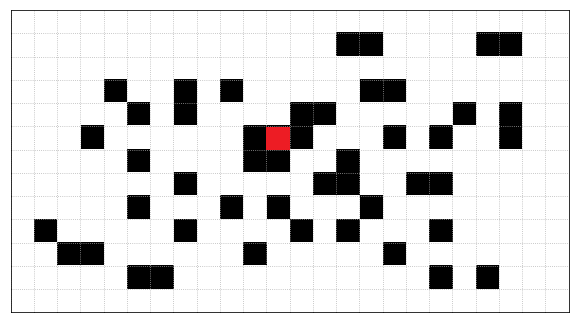 I went back and tried to ask him what was going on, but he was inconsolable, he keeps muttering about how many neighbors he has. I asked him about Martin (a mutual friend of ours), who lives with three other people a long ways off from everyone else and he yelled; 'They're fine, they're ALWAYS fine - don't you get it!??' before wandering off muttering about something in three years.

This puzzle is describing

Will your neighbor die?

Yup. See the GIF in the next spoiler.

The houses all spell LIFE.

Who designed this neighborhood?

The man, the myth, and the legend: John Horton Conway. Notice his first and middle names were used in the description.

Not the answer you're looking for? Browse other questions tagged mathematics word or ask your own question.

10
For the honor of Hufflepuff
3
Decode Bob's Friend's Code
6
The Golden Scorpion
7
math puzzle with random letters that decode into numbers?
11
Going down in history
10
All neighbor sum is 0 on a chessboard
38
Who is our nearest planetary neighbor, on average?
8
Not going anywhere fast
6
An extremely fair die
0
Can boys be mean too? YES!