Question from Beyond Language

This is a very lovely question from the extremely obscure book Beyond Language written by Dmitri A. Borgmann, founder of modern logology. 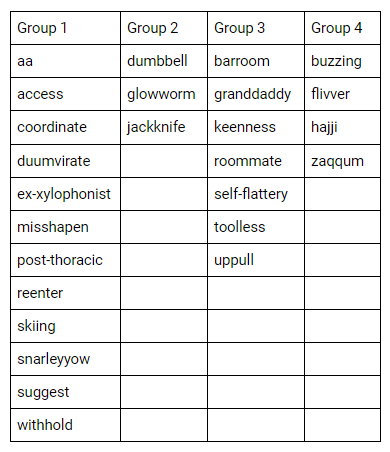 If your analysis of these word lists is correct, you will be able to answer each of the following questions:

One of the letters in the double letter is silent. (This is different than in group 4; these are compound words, so we know that one's silent and the other's pronounced)

Both letters make the same sound, but they are still pronounced separately.

The two letters are pronounced together.

The double letters in words in groups 1-3 are pronounced separately. One letter could be pronounced and the other silent. Or the same phoneme is pronounced twice in a row. Or there's two separate phonemes.

The double letters in words in groups 1-2 are pronounced differently.

The double letters in group 1 are pronounced differently, neither of them being silent.

Words in group 3 have two sets of double letters.

Not the answer you're looking for? Browse other questions tagged word-property or ask your own question.