Find out the birthdays of people mentioned in the question 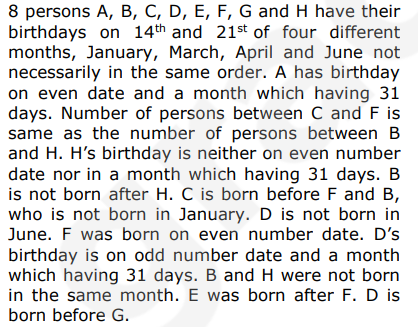 Two possible solutions (not sure if there are more):

As you mentioned, A = Jan 14 or Mar 14. We have similar conditions for D and H; D = Jan 21 or Mar 21 and H = Apr 21 or Jun 21. Also, F's birthday is on the 14th, which implies there's an even number of persons between F and H, and therefore also between C and B. B's birthday is not in January, but it cannot be in June because it's before H but not in the same month. March and April are the only options for B.

I don't believe there's enough information to come to a single solution. In addition to Glorfindel's two, I've come up with the following, including a complete one.

Based on the following logic:

Also possible is the following:

Starting with the same initial assumption as above,

7
Four people in a dark lift
5
Find multiple dishonest people
69
Three logicians walk out of the bar
30
Question 16 Ripple Effect
26
You trolls, get out of my party!
0
Puzzle involving people, favourite monument and work department
3
Who Visited and When?
8
FBI number riddle
6
Ask one verbal question to figure out who is blind and who is mute among three persons
6
Is there a way in which all the members can be seated?