Illegal patterns for the Rubik's cube

It is known that if you take apart the Rubik's cube and then reassemble it randomly, you will end out in one of $12$ cases, among which only one is solvable. The others result in having (1) one piece or edge piece turned, or (2) two edge or corner pieces swapped, or (3) both (1) and (2).

However, for the $2\times 2\times 2$ cube (or pocket cube), the only unsolvable configurations are those from (1), when at the end one (corner) piece is turned $120^\circ$ or $240^\circ$. But even if the reassembled cube is in an illegal configuration, you can at least solve it to a checkerboard pattern, like this: 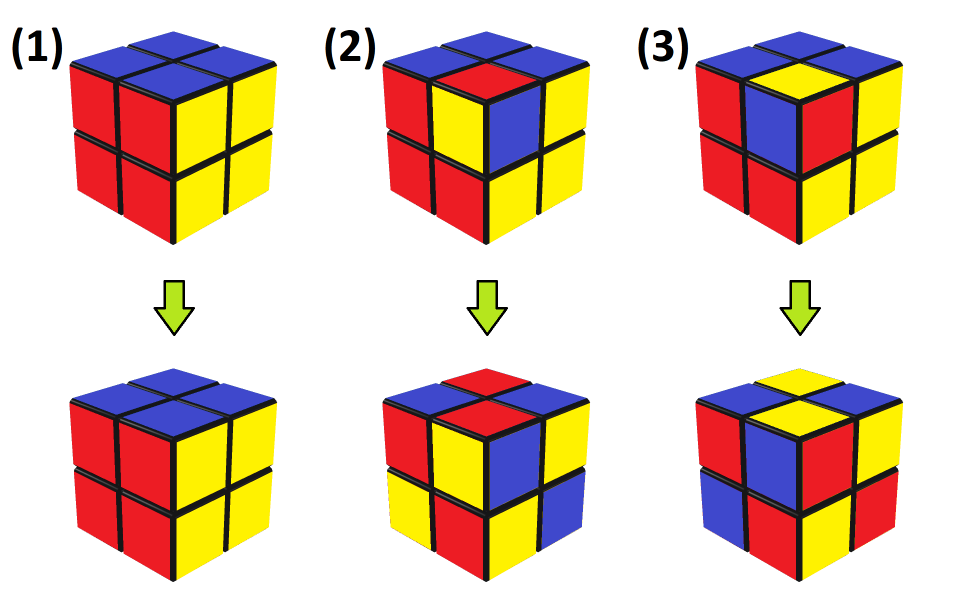 This suggests a game: you get a reassembled $2\times 2\times 2$ cube, and you have to solve it to one of the above three states: same color, or one of the two checkerboard patterns. The point is to figure out ASAP in which case you are. So this game will consist not only in solving the cube, but also in figuring out the task itself.

I think it would be interesting to know if we can play a similar game with the $3\times 3\times 3$ Rubik's cube.

Question: What are some "nice"${}^\dagger$ patterns for each of the $11$ illegal possible cases?

${}^\dagger$ (Lengthy technical footnote, better ignore it) I was asked to define "nice" more objectively. One of the purposes of the $2\times 2\times 2$ example was to suggest what "nice" means, without explaining it mathematically, because many cubers have great intuition without knowing the math behind, and I could lose some nice answers.

But for the readers who want more rigorous and objective definitions, I would say "patterns which exhibit larger symmetry groups". For example, the $2\times 2\times 2$ checkerboard patterns (2) and (3) in the picture are invariant to the following transformations (call the initially turned corner the main corner and the long diagonal of the cube determined by it the main diagonal, and consider them fixed):

and the transformations resulting from their combinations. All these transformation "fixed" by the appropriate color permutation to get the original checkerboard pattern.

This is the group of the rotations of the cube preserving the main diagonal, which is isomorphic to the chiral dihedral group $D_{3}$, of order $6$.

By comparison, the original corner turned configurations (1) and (2) from the picture admit a symmetry group of order $3$ (obtained from $\mathbb{Z}_3\times 120^\circ$ rotations, combined with color permutations).

So I would suggest measuring the "nicety" by the order of symmetry group of transformations consisting in rotations or reflections of the cube combined with color permutations, which leave the pattern unchanged. But don't let this definition stay in your way, maybe there are interesting patterns whose symmetry group is of low order, even the trivial group of order $1$.

Edit 2: Also, as @JaapScherphuis commented, the superflip pattern has the full symmetry, but it's not very nice, so fewer colors on each face means nicer too.

Also the symmetries of the faces matter.

So maybe we should combine them into a single formula, which seems to be hard because there are so many ways, and we can only choose one subjectively. So let's go back to whatever everybody means by "nice" (or maybe I should've said "pretty" like here https://ruwix.com/the-rubiks-cube/rubiks-cube-patterns-algorithms/).

Defining "nice" seems to be a rabbit hole :)

Here are some examples of nice patterns in the other orbits. 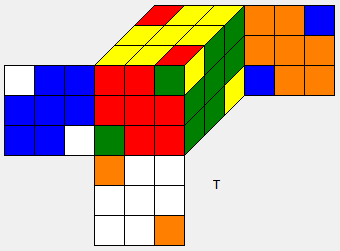 This is just the same as the 2x2x2 example in the question. Even though this has the exact same amount of overall symmetry as a single twisted corner (i.e. just 3-fold rotational symmetry), by cycling 3 other corners all the faces have the same pattern. 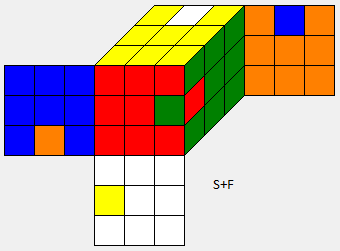 One edge is flipped in place, and two other edges swapped such that all faces look the same. Has two-fold rotational symmetry around the flipped edge. 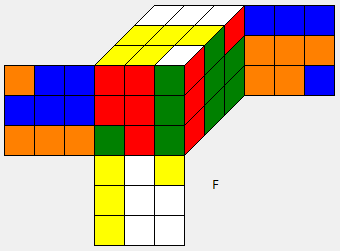 As above but 3 pairs of corners swapped too, so that now three 1x1x3 bars have moved (1 bar flipped, two swapped). Again has two-fold rotational symmetry around an edge. Note that the pattern that just has a single edge flipped will have more symmetry than this, but this is a nicer pattern because all the faces are the same. 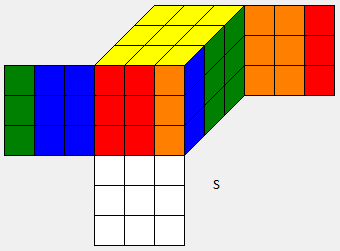 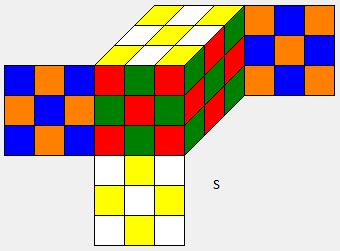 A 6X pattern with rotational symmetry around an edge, with the same symmetries as the previous pattern.

It is very hard to combine a Twist with a Swap and/or Flip to produce something nice. This is because the former is associated with a 120 degree rotation around a corner, leading to only 3-cycles and even permutations of both the pieces and the facelets, whereas a Swap is an odd permutation of pieces and a Flip an odd permutation of facelets. I haven't found anything nice for these cases (T+F, T+S, T+F+S).

What you could also do is introduce a two-fold rotational symmetry by having more than one twisted corner, twisted in the same direction. Unfortunately this generally leads to 3 or more colours on a face, unless you use two twisted corners that are diametrically opposite each other. This leads to another example for the twist orbit, and one for the Twist+Swap orbit. 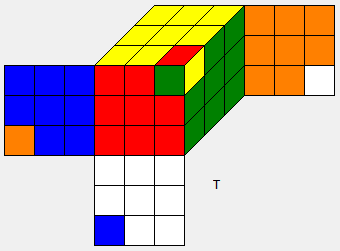 Opposite corners twisted in the same direction. Has 3-fold rotational symmetry, and point symmetry through the cube centre. 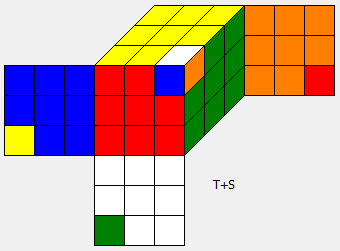 Opposite corners swapped, and twisted. This only has 2-fold rotational symmetry.

Not the answer you're looking for? Browse other questions tagged pattern rubiks-cube twisty-puzzles or ask your own question.