An entry in Fortnightly Topic Challenge #35: Restricted Title 1. Inspired by the title of this xkcd comic, but in no way related or affiliated beyond the shared name.

It's a well known fact that any animal without legs finds it quite impossible to jump. In fact, such creatures can't even leave the ground to pass by another of their kind.

Below is one such pair. A duo of serpents, trapped as it were, on a flat surface. The grammatically challenged among us might even call them... 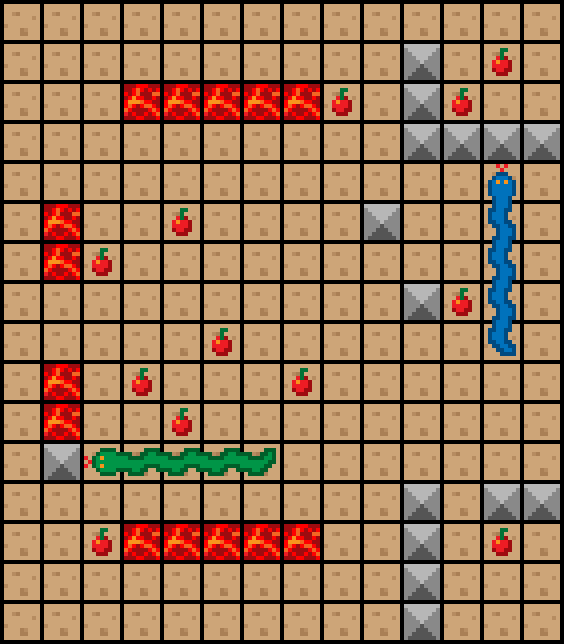 Here's a few other surprising facts about snakes:

What set of movements can the two snakes on a plane make in order to eat all the apples?

When is the best time to get the bottom right apple? How are you going to get in there? Having answered those questions, which snake is going to collect it?

*Here's a table providing the exact results of eating each apple (applied independently to each snake):

Edit (5 June): I've updated the facts above a couple of times to improve clarity, but to boil it down completely without flavour, the rules are as follows:

After eating about 1000 apples, I finally found a solution.

I used Ahmeds online tool to solve this puzzle. 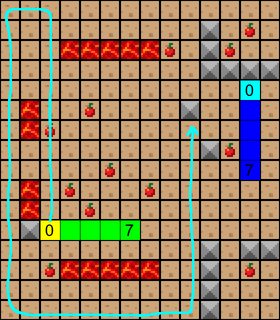 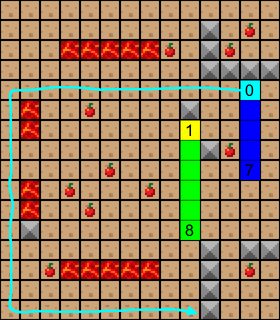 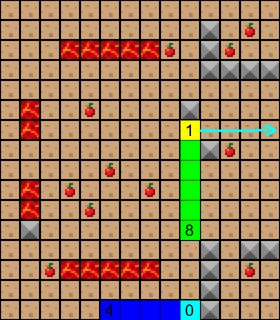 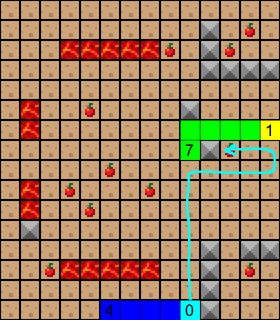 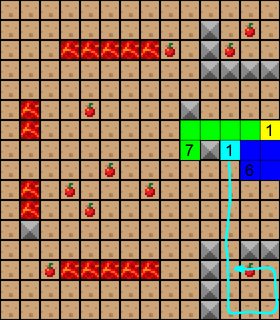 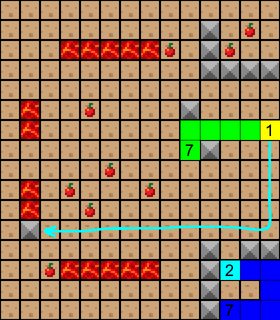 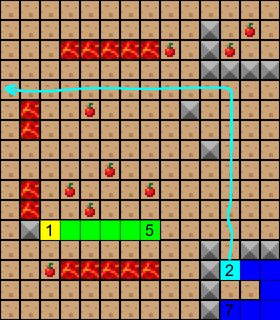 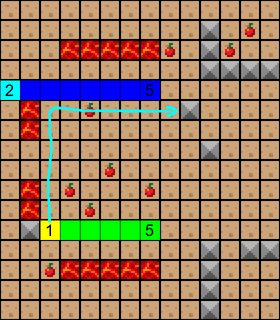 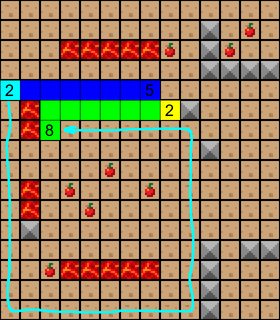 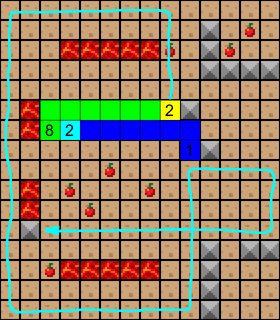 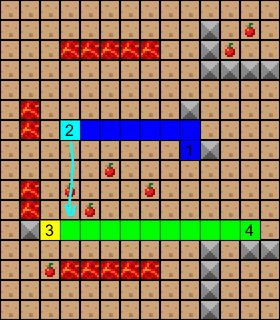 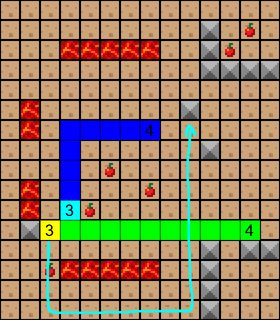 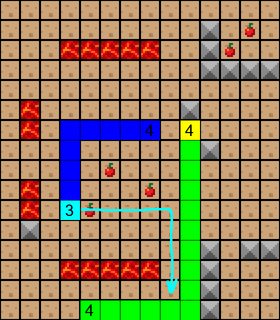 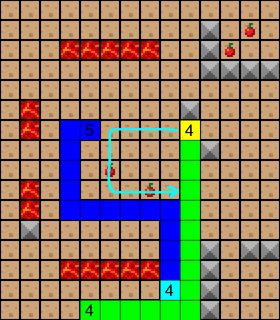 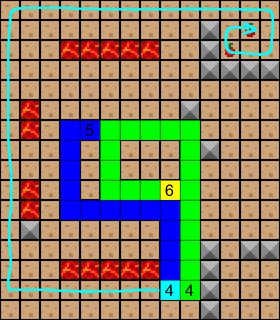 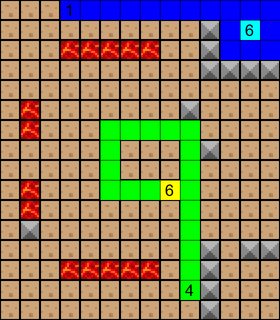 This is not an answer, however it could be helpful to try the puzzle online:

I feel like I don't deserve the bounty, but it is much appreciated. Thanks a lot.

This is an alternate solution to the accepted answer above. It represents the "original" solution as designed by the OP, with some of the logic and educated guessing I had intended solvers to take.

Initially, it can be deduced that:

From here on, we can't make any completely concrete deductions, but we can make some pretty reasonable assumptions...

The most probable way to enter the bottom right region is to hit the central-right block from the right hand side (collecting the apple at the same time), then head down. Therefore the snake to do this must have collected no other apples prior (lest the get stuck in the bottom region), meaning the blue snake has to get it (the green snake will almost certainly collect an apple on its first move).

So, how do we get the blue snake into that position?

Obviously there's multiple ways to do it (eg. see Sleafar's solution), but either way, it relies on the realisation that you need to position the green snake to be running horizontally either above or below the target block, to create a wall for the blue snake to pivot off. 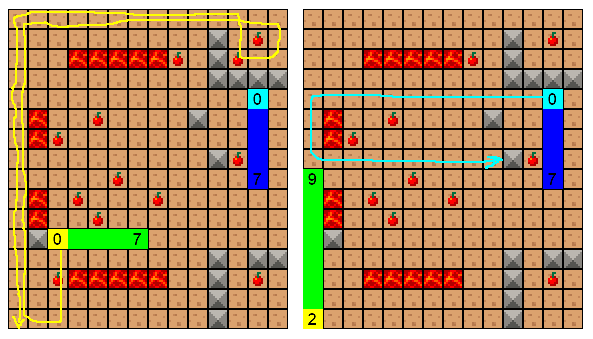 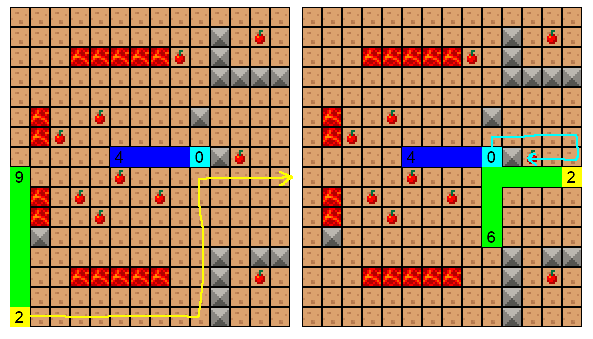 From here the next few steps are fairly obvious, given that there's not a huge number of possible ways forward. 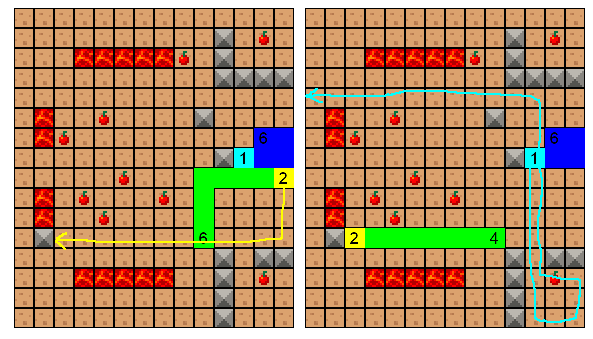 From here, my solution is simpler to deduce than Sleafar's because the green snake is longer and most of the apples are contained in the centre region. So, targeting apples aggressively: 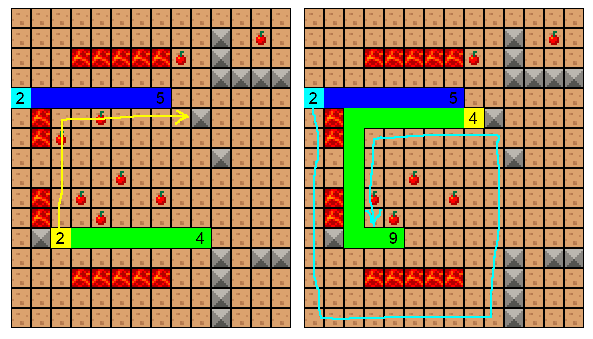 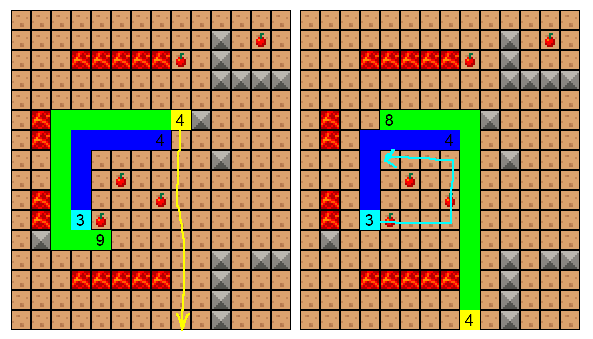 By now it's pretty clear where blue is going, and green still needs two more apples, so we just need to find a way to leverage blue's position and close things out: 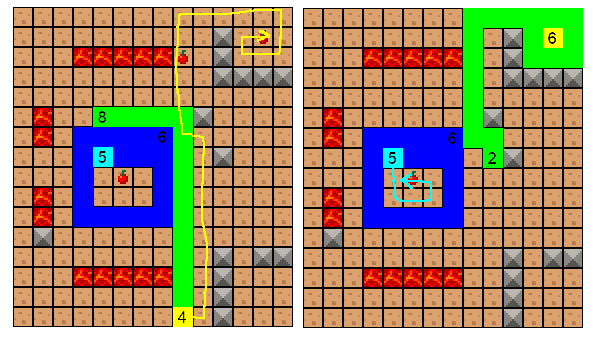 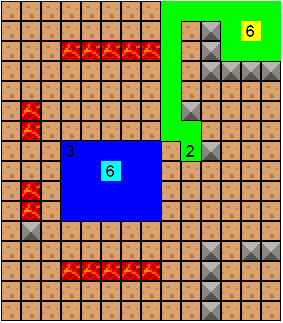 Not the answer you're looking for? Browse other questions tagged visual strategy or ask your own question.

43
lolcatz can haz ur infinit cheeseboard
9
The Lazy Laser Physicist: Part 2
14
Gliding through an ice-maze
6
How to get the least number of flips to a plastic chips to get a certain figure?
1
Lasers: Generalisation of Level 8 (Level 11)
0
Elementals and Aliens
5
Can you destroy the kingdom without getting caught?
3
Clearing the Snakes
12
Remove the magic from a 3x3 Magic Square