Clark and Albert sat at the same old table they'd met at years ago. As per usual, there was hardly anything to drink, and they'd had nothing but sips between them. Near Albert, there were some scraps of bacon, and an egg, scrambled. It was the same order as always.

After this lazy breakfast, the question, of course, is:

How much does Albert weigh?

Note: the title is inconsequential to the answer

Albert's seat has number 13, that I know, but he weighs... (insert rummaging sounds from the direction of the knowledge tag)

Clark and Albert sat at the same old table they'd met at years ago.

As per usual, there was hardly anything to drink

Out of the 118 known elements, only Bromine and Mercury are liquid in NTP

and they'd had nothing but sips between them.

Near Albert, there were some scraps of bacon, and an egg, scrambled.

It was the same order as always.

There were a couple of new cyborgs sitting at the far end of the table though, several superheavy artificial elements were officially accepted recently.

After this lazy breakfast, the question, of course, is:

How much does Albert weigh?

And Clark then? Well, I missed two thirds of the explanation myself, but as OP helpfully pointed out in the comments below,

Oh, if only I could upvote a question twice!

Post-Solve OP Edit:
@Bass answered this riddle perfectly! The context of his answer can be seen here: 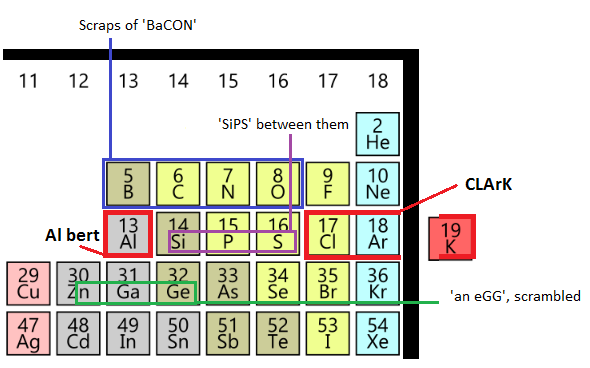 Albert and Clark are pancakes, so part of the meal. They weigh nothing afterwards because they are eaten. "Nothing but sips between them" is syrup. Albert and Clark are names given to the two pancakes on a breakfast menu item. They've been serving the same dish for years, which is how they met long ago.

Clues hidden in the puzzle inclued the following:

So what can we do with

Presumably our answer will be something along the lines of "fifty kilos" or some such - a weight. Given the letter count of the likely form of the solution, and the fact that five ciphertext inputs of two types are needed for each letter of the plaintext output in Bacon's cipher, I'd guess that words rather than letters or sentences will be the things to be classified into two types. There are exactly fifty words, which is promising as it's a multiple of five.

Now how to classify the words into those two types, the "A" and "B" of Bacon's cipher? My first thought was word length: an even or odd number of letters, perhaps. But that would give AABAB ABAAA ABAAB AAAAB BBAAA AAABA BBBAB BBBAA BAABA ABABB, which doesn't translate sensibly via Bacon's cipher.

Not the answer you're looking for? Browse other questions tagged enigmatic-puzzle wordplay lateral-thinking knowledge or ask your own question.

12
Fowl Perpetrators Caught as Robberies Add Up
15
Elle Rend Le Coeur Plus Amoureux
43
Breakfast with friends
50
Find the treasure before Dargloc does
7
An old man told me a story at lunch
7
The Great Key Mix-Up
5
A Balanced Breakfast
11
The Heart of the Matter, a Sergeant Sequence mystery (fan-fic)
4
Larry and Laura Literal