This is a Normal Crossword. For the final answer, you will need to give me something that completes the "pattern". The pattern is for you to find out. And finally, I have given you the grid but no numbering(Can't make everything easy for you fellas). 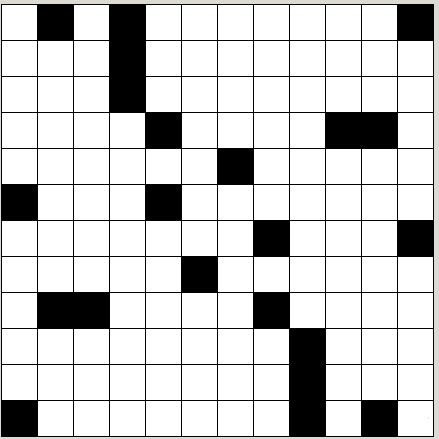 Across:
Archaic British term meaning vulgar(7)
Jaw-dropping emotion(3)
Archaic term for declares or interprets(8)
Harry Potter’s friend Weasley(3)
Unnecessary honking leads to this(4,4)
Moves from one place to another(4)
Long ago(4)
Monarch’s Play partly written by Shakespeare(6)(P.S. I am looking only for the name)
Descent towards the earth(5)
German for me or myself(3)
Predecessors of Primary Oocytes(7)
Dances seen in 19th Century France(7)
Scottish word for Self(3)
Oblong block of gold or silver(5)
Dark lava rock(6)
A magical influence(4)
One of the Five Great Lakes of North America(4)
Pienta who acted in 7 Chinese Brothers(8)
Operate an equipment(3)
Woolen fabrics(8)
Psychedelic drug(3)
King’s law?(7)

Down:
Forcefully move or push(5)
Extending a contract(8)
Football player Edwin Van der __(3)
Town in South London, England(7)
Type of mineral, known as Trona(4)
Bulls get angry on seeing this(6)
Screen behind the Altar(9)
Sacred mountain in Crete(3)
You pull this when you trick someone(3)
Sawyer(7)
Formula one racer who died in San Marino(5)
Malignant tumors in connective tissues(9)
_____ Bandit(3,5)
King’s actor Hurt(7)
“One of Us” singer Joan ____(7)
Kind of apple juice(5)
Someone who makes amends for past mistakes(6)
Greek hero who was killed by Achilles(5)
A hundred thousand(3)
An old English letter(3)
Second minor Prophet of Ancient Israel(4)
Like a tricky road curve(3)

SKOG is very close but they have missed an alternative interpretation of the title.

You need to relate the title to a recent event.

I might have found the connection to the title:

As SKOG mentioned, EDWARD, WILLIAM, and CHARLES are all members of British royalty.

Therefore, the pattern is completed by HARRY.

EDIT: ManyPinkHats found that the four most recent royal weddings correspond to the four names earlier, in crossword order. This provides evidence for the pattern.

Got the grid mostly completed.

Clues are in regular crossword order as noted by Ian MacDonald 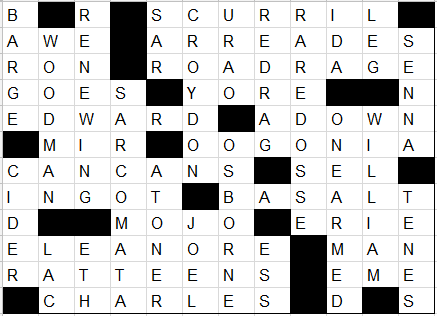 As to the "pattern":

Three of the clues have the word "King" or "Monarch" in them, which ties to the title "The Royal Affair".
They give the names EDWARD, CHARLES and WILLIAM, which are certainly the names of royalty without their numbers. As noted by another solver (MadJaqk), if we think of this as British royalty, the last King Edward was Edward VIII, the last William was William IV, and the last Charles was Charles II.

A monarch whose name only shows up once, like Victoria or Anne.

It's possible we've missed something though.

Not the answer you're looking for? Browse other questions tagged crosswords or ask your own question.

15
What are the conventions telegraphing when answers are abbreviated in New York Times crosswords?
13
The smallest crossword
0
Find the missing letters
7
The Crossword from 240BC
34
Who was the US president in [oh rubbish, I forgot the year]?
24
Do not cross the line!
15
The 7-numbers crossword
22
The Crosswordsearch
12
Around the Bend
15
The words go marching round and round