I was working at My God, it's full of stars! puzzle, when a sudden realisation came into my head: that I have a friend, who is also an astronaut, and that I have an appointment with him! We were gonna drink tea with crumpets and play board games.

Well, actually the appointment was due about two years ago, but I thought that a true friend would understand me being a little late.

The door to his house was open (that chap is a bit forgetful), and in the room, where we used to play, a lot of things were missing. Well, - I thought - he probably just took all his belongings with him and went for a walk. He surely will be back soon.

But then I saw something terrifying: 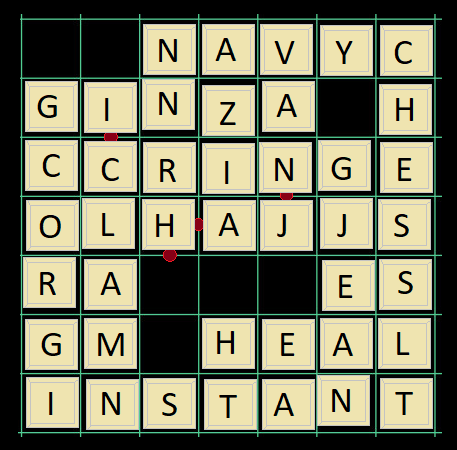 Not only did he play Scrabble without me, he also used the word "Jean", which is proper noun, prohibited in the game!

Then I realised that there was something weird here - why would he still leave the game on the table, if we were supposed to play it years ago? I came to a conclusion that he was so bored that went into a long-lasting space-trip, instead of calling me and reminding of our scrabble game!

Well, now I gotta find him. Looking across the place I found two bookmarked books:

Safety regulations of space-jumping
1) Place yourself in a place of unstable continuum.
2) Put a towel on your head not to make a mess if it blows up.
3) Aim for the stars.
4) Space-jump.
5) ???
6) Profit.

I didn't get a single word of it, honestly. I remember my dear friend telling, that our planet's continuum is unstable, but I never understood what it really means.

I removed the scrabble pieces and looked at the map underneath. 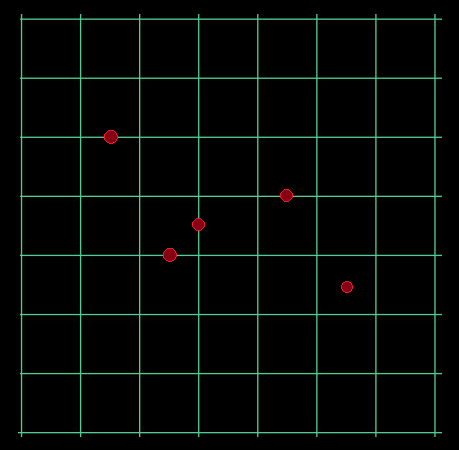 I was completely lost.

I took out my cellphone and decided to give... Wait, what's his name? It was something foreign... I... Well, it seems that I forgot it completely. Now I don't know which number do I call. I could call all of my friends, but that would take eternity. His name was...

So, help me, dear people. What IS his name?

It's not John Cena, I already called John Cena and it's not him.

I just found a strange metallic thing under my friend's bed. As I sent it to a friend from NASA, he said, that it was a beacon and he'd help me locate my friend.
After a while he sent me this image, stating that white dot represents the location of my friend.

- Nonsense! - I stated, - mister KernelPanic has already mapped our sector for us. There is no such place!
However, my NASA friend had no time to explain the image.

The rules are stated by KernelPanic. His solution is correct, however not unique. Moreover, there are exactly two solutions.
You have to find the second one. Then you take the letters on the 'unstable' cells - those that differ their stars in two solutions. To get the proper order you have to connect them using space-jumping (if you solve the puzzle you'll probably already understand the idea).

to the galaxy puzzle 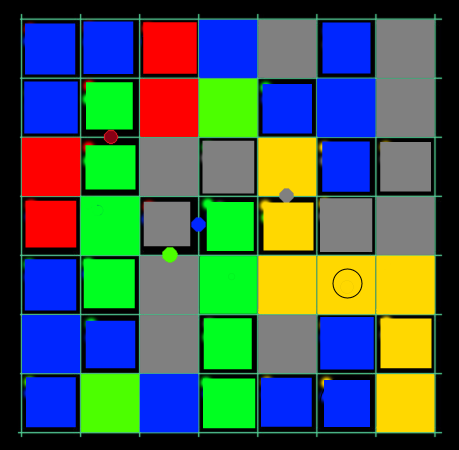 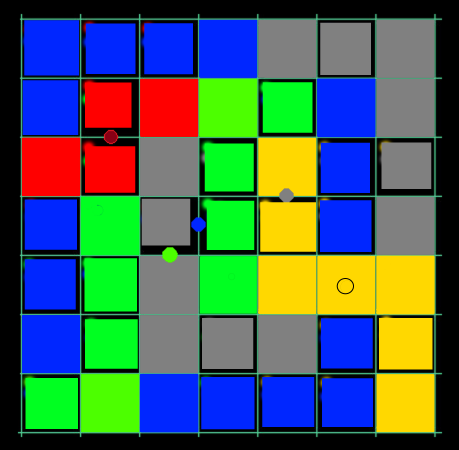 the first is the one already found by KernelPanic, and the second is a different one.

the first of these represents a past state of the universe and the second a present state, and our friend is in the location shown in the first hint (part of the galaxy I've shown in red, near the top left, in the second solution).

I haven't anything interesting to say about the solving process. It goes like this: first you identify squares that can only possibly be one colour because the others have no symmetrical counterpart; then you know that e.g. if a square is red then its reflection in the blue star (I know, all the stars are red in the original diagram, but I gave them all different colours for obvious reasons) can't be blue; after drawing every inference I could, I had maybe 1/4 of the grid coloured and the rest mostly down to one of two possibilities. Then I just picked one of the unknown squares and tried each of the two possibilities it exhibited, and it turned out that that was enough to lead to a single solution in each case.

Here are the "unstable" places: 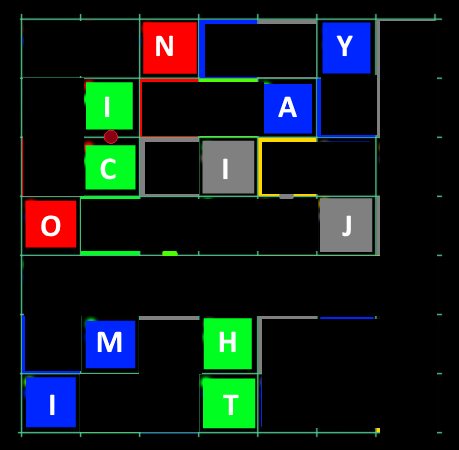 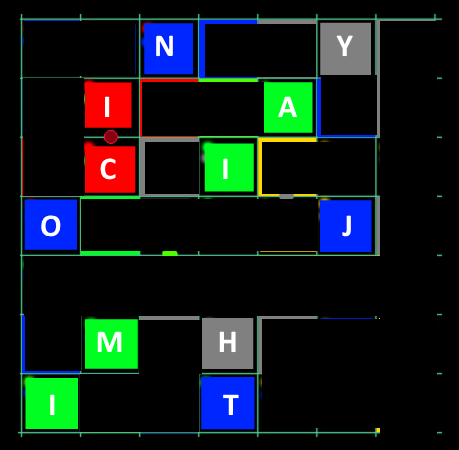 Now, what about the space-jumping? Well,

the instructions suggest that maybe we connect each "unstable" square to its symmetrical counterparts in the two galaxies it's part of. ("Aim for the stars".) If we do this and start in a suitable place (not, as it happens, our friend's location), we get: I AM IJON TICHY. Clearly someone is a fan of Stanisław Lem.

there are 3 squares that have only one possibility right off the bat: 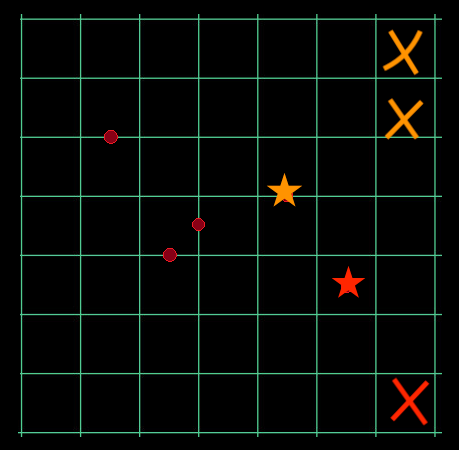 since there are an odd number of squares, at least one square cannot have a "pair", thus the only galaxy centred on a square must own that square: 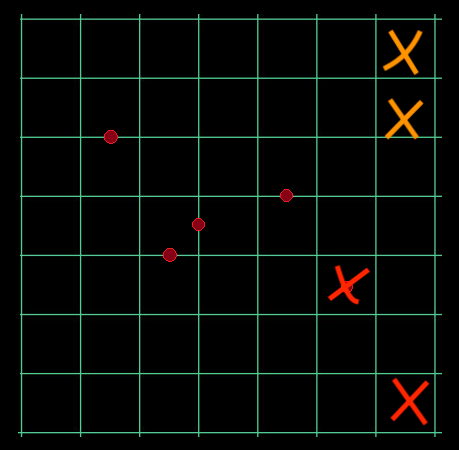 that there's no need for the galaxies to be connected. (In fact, it's impossible for them to be.) Knowing that, the rest of the galaxies are pretty easy to fill out (apologies for the image quality; didn't have much to work with on my current laptop): 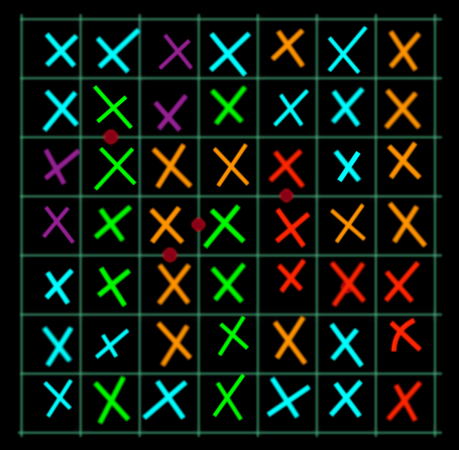 8
John's first pixel drawing
1
A case of academic misconduct?
12
The shrink and his patient (Part 1)
53
Desert Irrigation Project
81
My God, it's full of stars!
6
John got a new dog?
24
A half successful police raid
29
You go wherever you go today
19
Captain Pun plays cards
18
NASA analyzing message from space