A thirsty king and his knights

The black king has spent his life fighting over this strange checkered land, the white king has finally been defeated and his troops have surrendered and pledged allegiance to him. Now he's not sure what to do with himself, he decides to have a drink. But he is a king! He can't just have any normal drink that some lowly pawn might have. He demands a drink of exactly 2 litres be delivered to him! As quickly as possible!

You are only allowed to entirely empty or fill the jugs, no pouring out half

You can move any piece in any order, you don't have to go W,B,W,B etc.

Knights move as knights and can only interact with each other when they are either horizontal or Vertical, they cannot interact if diagonal

Filling or emptying a jug counts as a 'move' 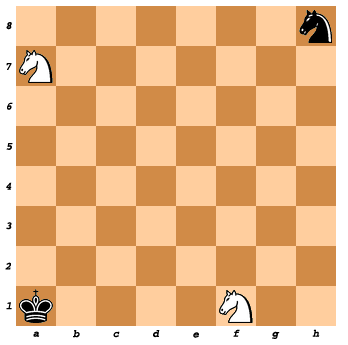 Your task is to try and find the solution with the fewest moves
I have accepted an answer of 23 as I don't know of a way to do fewer but I haven't 'proved' this so feel free to try and improve upon it :)

It's possible to do it in

I can do it in