Ernie and the Case of the Singing Sisters

On my way to work each morning I pass a news-agency that usually has a sandwich-board displaying the latest headlines of a somewhat disreputable tabloid newspaper (not that I would ever buy such a scandal sheet).

I was surprised to find Ernie in an odd mood when he opened the door. "It's just tragic" he exclaimed, as he ushered me into the living room "Poor Maia - poisoned - never to sing again". I told him I had no idea what Pleiades or Maia was. "Good grief!!", Ernie replied, "Do you live under a rock?". And he went on to explain that The Pleiades was his favorite geek-girl rock-band, the only one in the world where the members were seven identical septuplets and graduates of the Advanced School of Geometrical Disection. I was trying to chose some sympathetic words when there was a knock at the door. I answered it to find a middle-aged woman in a suit who introduced herself as Detective Superintendent Harriet Bosch - she explained that she needed Ernie's expert opinion to solve "a perplexing problem involving the Pleiades affair".

"When Maia died, and her sisters all became ill after supper with her sisters and the group's manager, I was called in to investigate", began DS Bosch. When dealing with possible foul play", she continued "I use the 4M approach. Means, Motive, Method, and Malefactor!".

"The MEANS became apparent during the initial investigation. Traces of a rare toxin from the Poison Sparrow Toad were found in blood samples from all seven sisters, but not the manager's. It's an unusual poison - up to a certain dose it only cause indigestion - but the tiniest amount above that dose is fatal. Six of the band-members were just under the fatal dose, but Maia was slightly above it. It was obvious that such a rare poison couldn't have been ingested accidentally, so we immediately initiated a murder investigation."

"The MOTIVE was easy to find. We discovered that Maia owned the rights to all the Pleiades music - she had just announced that she was about to go solo. Her sisters would be left with nothing but the wages they had earned for past concerts. We surmised that one or more of the sisters poisoned her - either in revenge, or to inherit a share of the royalties, worth millions."

"The METHOD is a bit tricky. The only things any of the band members ate were home made cakes at the after-concert party. Our theory is that one of the sisters mixed a precise measure of poison into her cake and gave Maya a slightly larger (and fatal) share, but the witness statements don't support our hypothesis - it seems as though everyone except the manager had an exactly equal share of all the cakes."

The detective passed over the written witness statements.

The Surviving Sisters Statements (all 6 made identical statements): 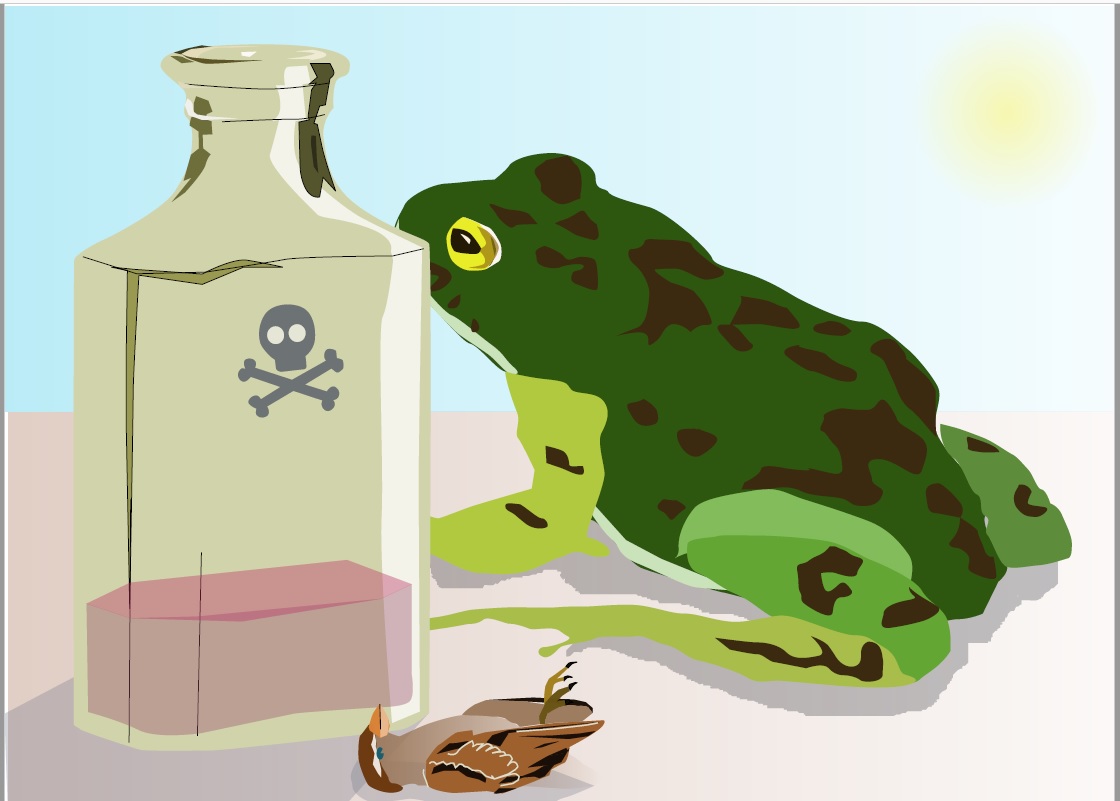 Ernie read the statements, paused for a moment, and then picked up a pad and drew eight cryptic diagrams on it. "As far as METHOD goes, I agree that any one of the witnesses could be lying", he said, "so any one of the sisters could have poisoned their cake and given Maya a slightly larger piece. It's even a possible suicide suicide. But assuming there wasn't some sort of mass conspiracy", he continued "surely the most obvious MALEFACTOR is the witness who's statement could not possibly be true?". Ernie passed the diagrams to the DS who thanked him and then left the house without further comment

Ernie wouldn't discuss what information was in his note, but this morning I noticed a new bill-board: SINGING SISTER ARRESTED IN DAWN RAID!!!!!! To guarantee a fair trial, the suspect's name has been suppressed by judicial order, but I am just itching to know. Who did Ernie identify as the potential MALEFACTOR? Maybe a diagram would help.

I am accepting Sleafar's argument as he/she does state that Celaeno's statement cannot be true. To show that there is a solution for Electra, consider the following.

Consider you want to divide a circle into 4 regions with proportional areas A:B:C:C. Initially ignoring the areas C and C, lets try and get the ratio A:B correct. You can make the two cuts so that they that intersect on a diameter of a circle which bisects the angle theta between the two cuts (top left sketch below). If the intersection is too far from the origin of the circle then the area A will be too big relative to B (top left), if the intersection is too close to the origin then area B is too big (top right). As the areas vary continuously as the intersection is moved along the chosen diameter, there will be a solution that is 'just right' to give a correct ratio A:B for the chosen angle theta. Now (with all the solutions where ratio A:B is correct) note that if theta is very large, the areas C will be too small, but if the angle is very small then the areas C will be too large. Once again, as relative area C varies continuously with angle, there will be an angle that is just right to give the chosen ratio A:B:C:C. If we choose A:B:C:C to be 2:1:2:2, then make a copy scaled down by sqrt(2), we will have a smaller circle divided up into areas 1:1/2:1:1. Put this inside the large circle so the cuts coincide, and the smaller wedges are each 1/2 the area of the larger wedges, so you will have 6 equal areas 1:1:1:1:1:1 (the inside and outside parts of A, C, and C, plus two smaller areas 1/2:1/2 which can be added together to make the 7th equal share. 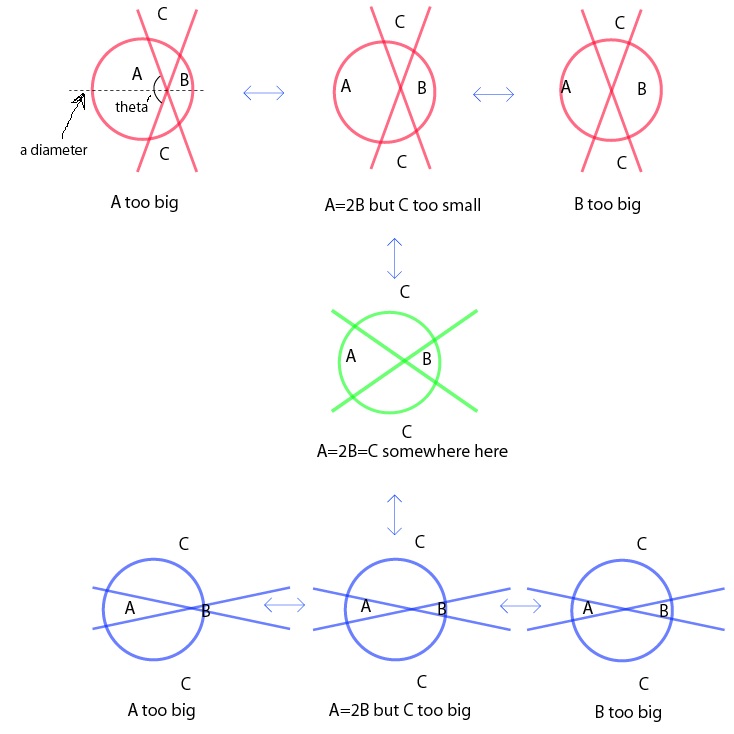 The approximate angle and offset from the center are ~75 degrees and 0.19*Radius. See below superimposed on Sleafar's approximation. 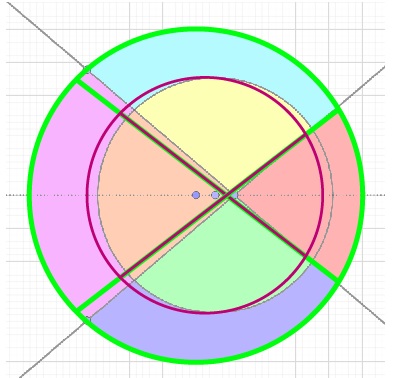 I was able to limit the number of suspects to $2$ of the $6$ sisters. For the rest of this post, I assume the radius of each cake is $1$ (in other words the measurement unit used is the cake radius). This means the area of each cake equals $\pi$. Also, except in Mayas case, the word portion means $\frac{1}{7}$ of a cake.

The solution for this part is pretty straightforward: 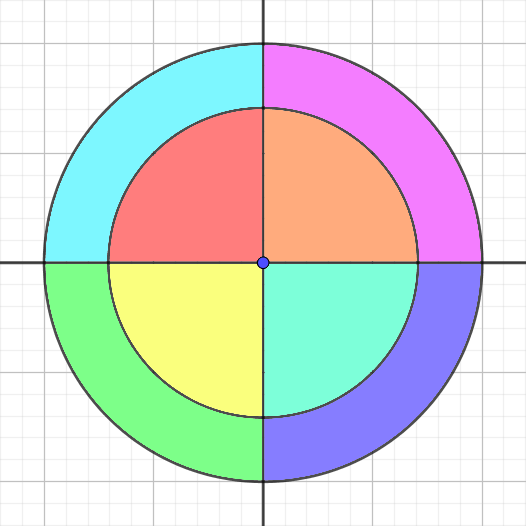 Electra used the same cutter as Maya, and I wasn't able to find a way to make $7$ equal portions using this cutter. This means Electra is a possible suspect.

I guess something like this could be possible, but I'm not even close to prove the portions are of equal size (they obviously aren't in the picture). 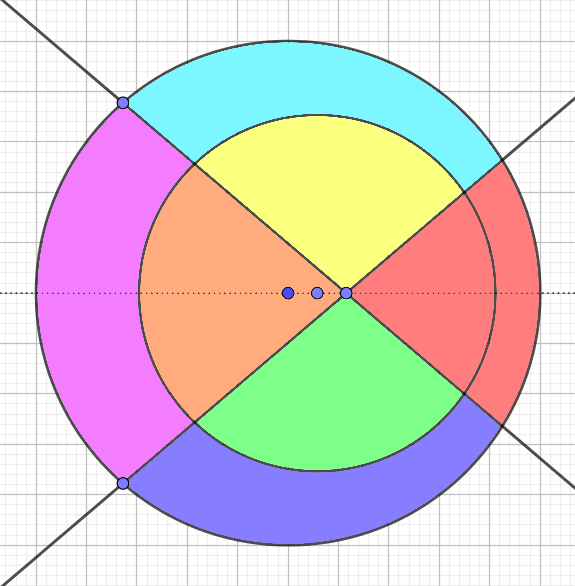 Edit: After looking at the picture above, I think there aren't enough degrees of freedom for a valid solution. The red part must have the size of $1$ portion, the opposite part (orange and violet) must have the size of $2$ portions. This defines the position of the straight lines. The circle must split the orange/violet part into exactly equal parts, which defines the position of the cutter. And finally the cutter must also split the remaining $2$ parts into equal portions without beeing able to make further adjustments which seems highly unlikely.

I cannot prove these are the only possible cutter sizes, but these are again the most straightforward solutions:


Using these cutters, it's possible to split the cakes like this: 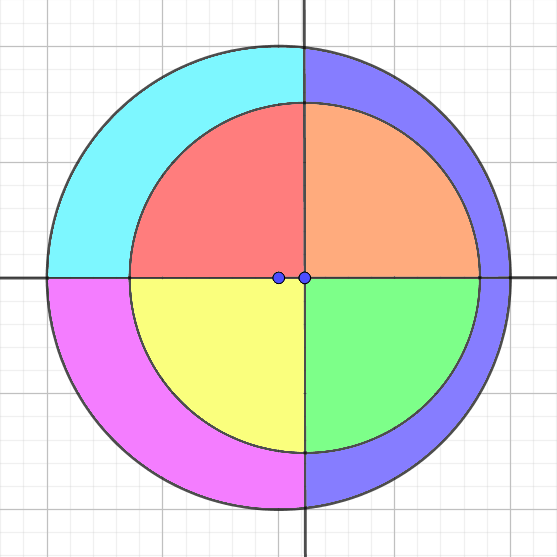 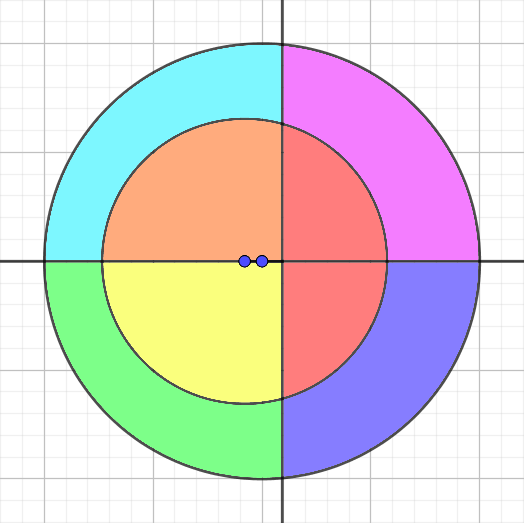 Asterope used the $4$ portion cutter and the $3$ portion cutter. The intersection of both cutters has the size of $2$ portions. The distance between the cutter centers is $\approx 0.475$ (calculated using this tool). 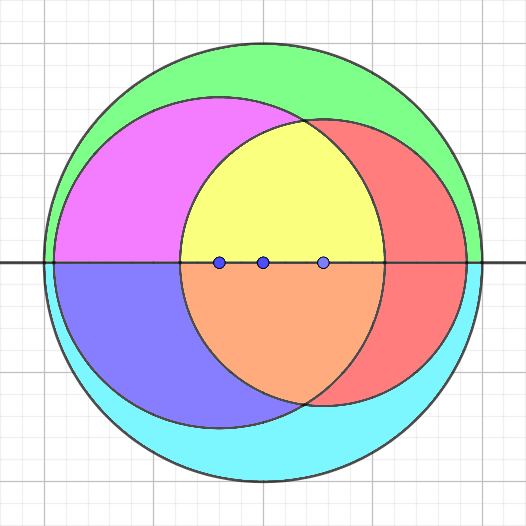 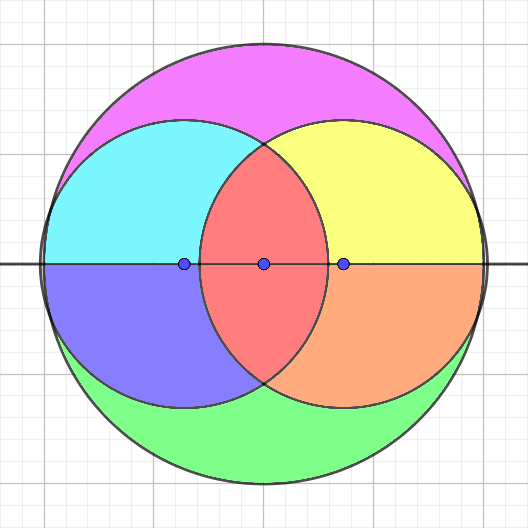 Using the $3$ portion cutter for an intersection with the size of $1$ portion we have a distance of the centers of $\approx 0.724$. The problem is, that we cut outside of the cake, which means the pieces left and right are too small, and the pieces on the top and bottom are too big.

It could be "fixed" by moving the cutter slightly inwards in each case, making the center piece bigger than the others and giving it to Maya. This means that Celaeno is a very probable suspect.

Edit: I also checked the numbers for the other cutters with a $1$ and $2$ portion intersection, and they aren't even close to a valid solution.

Merope used the $4$ portion cutter in the center, and the $3$ portion cutter on the sides. The intersections have the size of $1$ portion. The cutter centers have a distance of $\approx 0.841$. 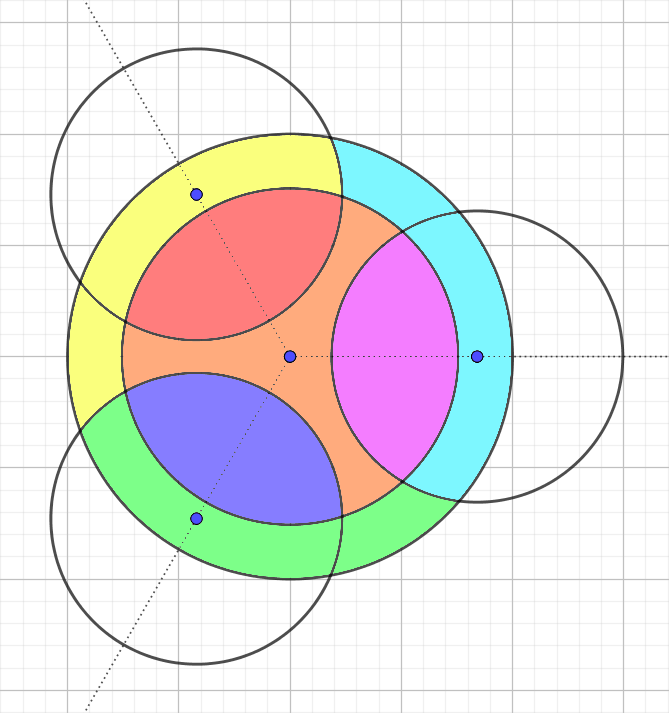 Not the answer you're looking for? Browse other questions tagged mathematics geometry word-problem dissection or ask your own question.